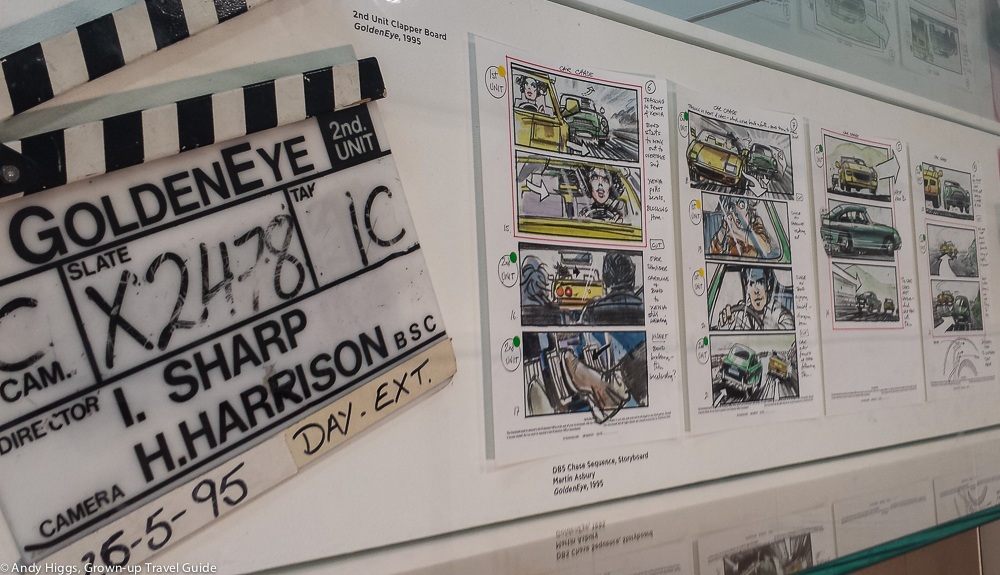 I accept that it may not come as a shock, given my status as a 007 fan.

Not sure if I’d go that far, but yes – I admit I have more than a passing interest, as readers will already be aware. And I mean who doesn’t like James Bond?

I’m sure there are some people…

Wierdos. In any case, Bond in Motion is not just for the fanboys and fangirls. Already a major hit since opening in March, the exhibition really is fun for all the family.

Bond in Motion at the London Film Museum in Covent Garden showcases a collection of original vehicles from the 50-year, 23-movie history of the most famous – yet still remarkably ‘secret’ – agent in the world.

It is the largest such display to be held in London and decisive proof of the fact that the capital needs a permanent 007 exhibition. What? Why should Harry Potter get one and not James Bond?

Clips from the respective films accompany the hardware on display while other memorabilia, background information and anecdotes further enhance the experience.

This is a popular exhibition, make no mistake. It’s a good idea to book your tickets online (you can reserve a time slot for your arrival) in advance in case they are full. You don’t want to miss out due to bad planning…

You’re greeted by a 1/3 scale model of the helicopter from Skyfall which is hanging from the ceiling and impressive in its level of detail. Although it will soon become apparent that detail is something the Bond crew have always taken seriously, even for props seen only for a fleeting moment. 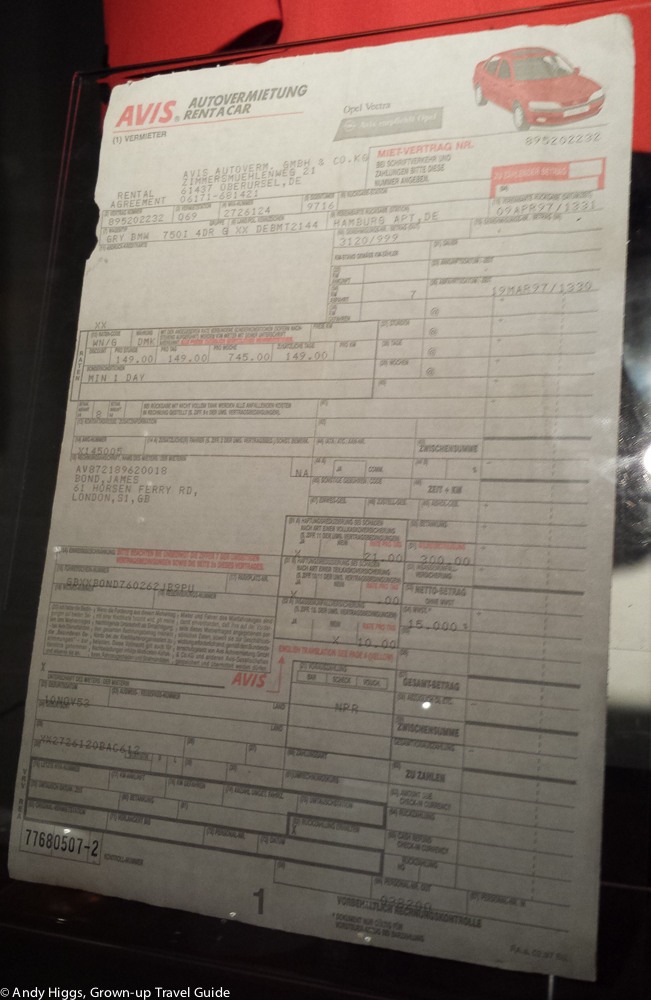 Perhaps the best example of this is the car rental agreement from Tomorrow Never Dies fully completed in German.

The first section of Bond in Motion is found on the mezzanine level up the stairs. A treasure trove of bits and pieces from the creative process including storyboards and design sketches, there’s plenty to see in this rather cramped area.

After ogling the model of the MI6 headquarters we moved downstairs to the main floor where the vehicles are on display. Let me just emphasize here that these are the actual vehicles used in the movies rather than replicas – if you are in any doubt check out the wrecked Aston Martins from Quantum of Solace (above) and Casino Royal (below).

The brief but highly entertaining documentaries explaining how the cars ended up in this state are a testament to the incredible skill of the stunt teams involved. 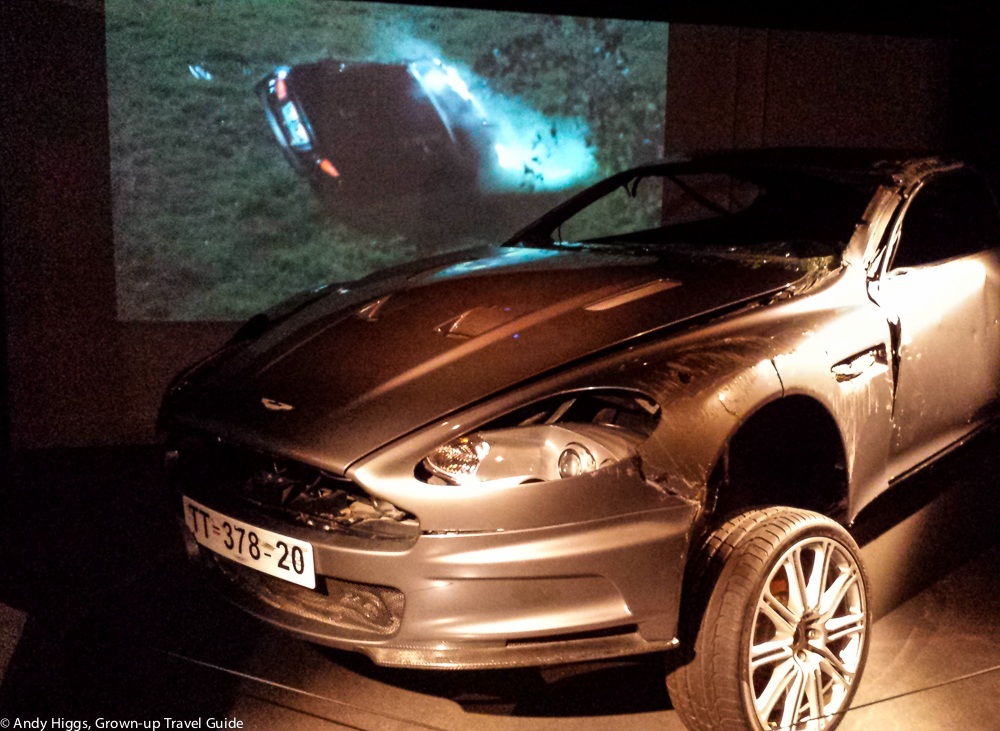 In my opinion the focus on performing record-breaking barrel-rolls and insane chase sequences for real rather than using CGI is one of the reasons for the success of the franchise.

It’s hard to believe that the first movie – Dr. No – came out in 1962 or that six actors have played the role of Bond, James Bond. Sadly they have yet to ask the guy below. 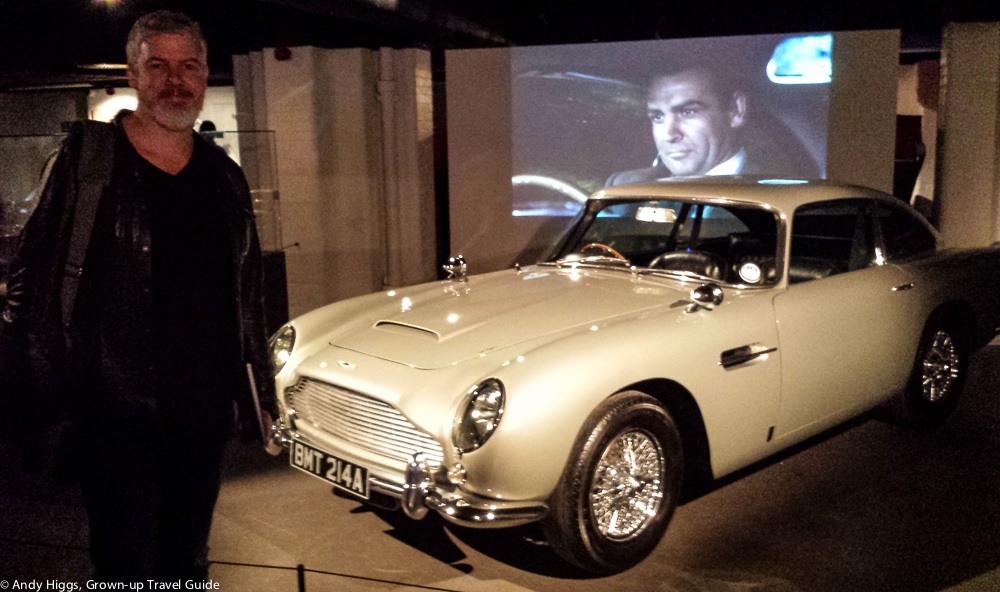 It’s also hard to know which of the cars is the most iconic – the Aston Martin DB5 or the Lotus Esprit submersible. I’ll give them equal first place but others will disagree; if you prefer the more modern vehicles you’ll love the rocket-equipped Aston from Die Another Day (bad movie, great cars) or perhaps the fully-loaded BMW from Tomorrow Never Dies?

Apparently more mundane models such as the Renault 11 and Citroen 2CV are anything but when you know what happens to them in the films – and lesser fans can find out from the projected clips.

The exhibition also includes the Alpine Sunbeam from the first ever chase sequence with Bond driving, Goldfinger’s Rolls Royce Phantom III and many more. 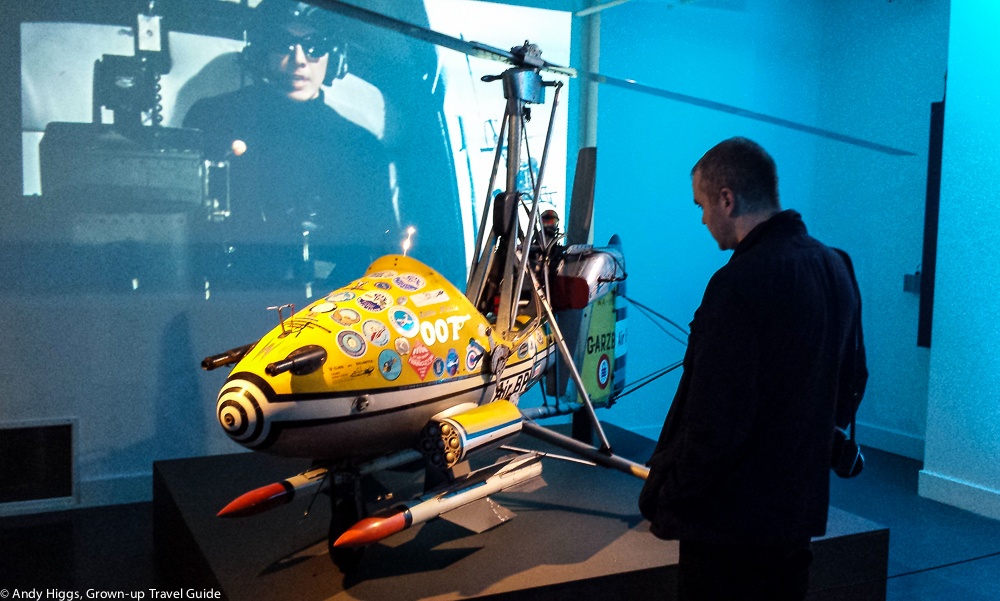 It’s not just cars, either – Little Nellie the pocket-sized helicopter (well, small anyway) will always have a place in Bond fans’ hearts who will also drool over the motorcycles. And who can forget the crocodile ‘submarine’.

Personally some of the highlights were neither wheeled nor capable of flying or submersion. I loved the never-before-seen drawings and other memorabilia such as the memorandum typed up during the production of Dr. No covering charges incurred. 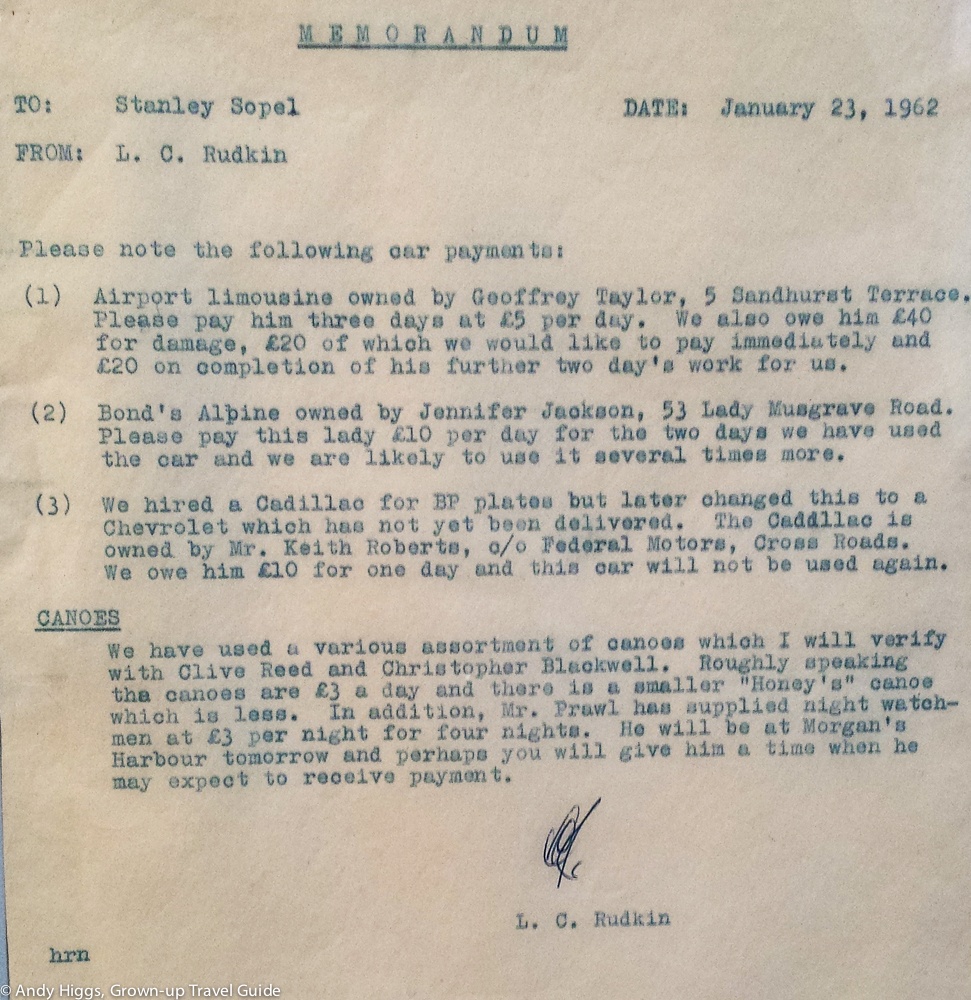 As well as a selection of Bond’s passports the display cases dotted around the exhibition hold credit cards, business cards, Bond’s pistol of choice, watches and his psychological evaluation report (failed) from Skyfall. 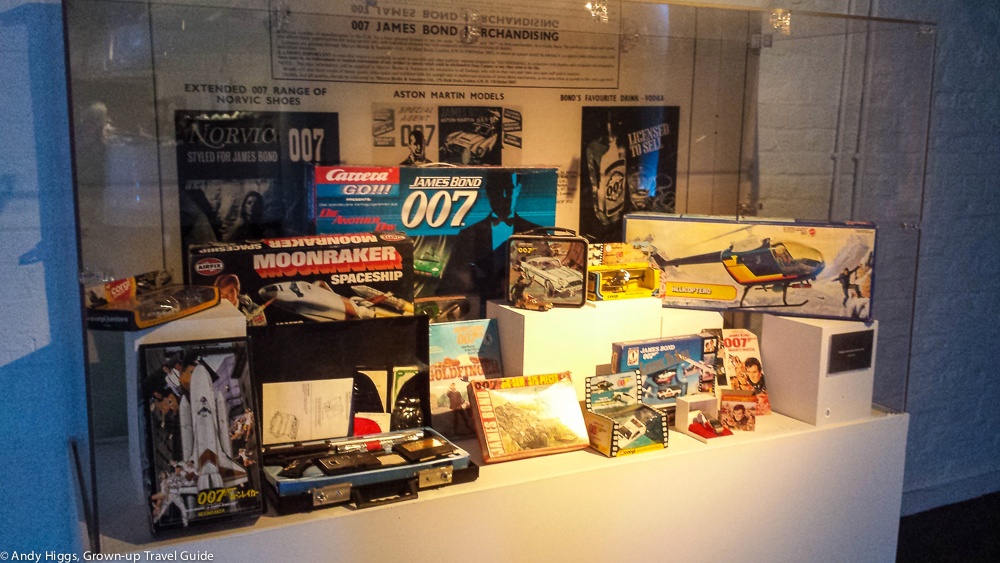 Of course I knew all about the Bond merchandising machine but I was surprised to see just how early its wheels began turning. While every boy of my generation seemed to have a Lotus and an Aston Martin model car (the former with pop-out fins, the latter with a pop-up baddie in the ejector seat) I had no idea of what other film tie-ins were available. Shoes, anyone?

No, I didn’t. But if you so desire, you can swap 8 quid for a picture of you dressed in a tuxedo jacket with the gun barrel background. Yes, it is tacky but extraordinarily popular, so who am I to criticize?

The single coolest thing of all (at least for me) 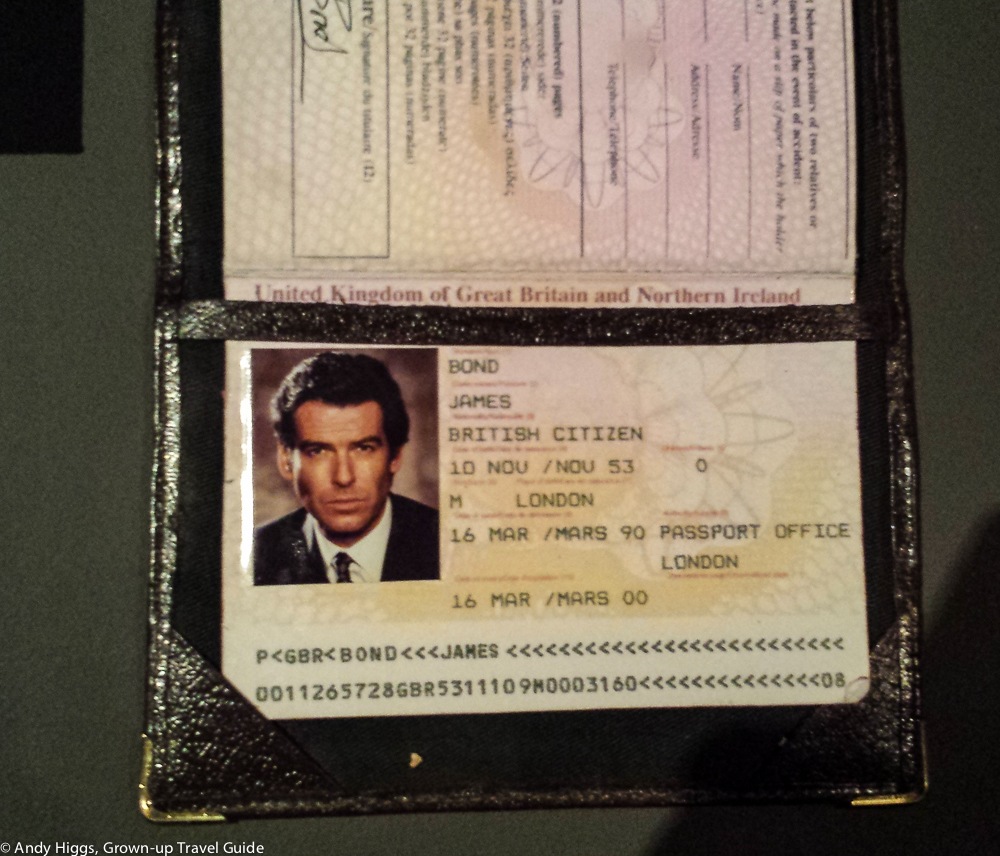 Knocking everything else into a cocked steel-brimmed hat was my discovery that throughout the movies 007 has consistently had the same birthday as myself – 10 November. This was worth the price of admission alone and of course I photographed every piece of evidence but am being considerate to you all by only publishing the one above.

The souvenir shop and cafe

Naturally you can stock up on films, books and posters at the souvenir shop and fill up on rolls, cakes and coffee at the cafe. Both are very good in their way, if hardly ground-breaking. The shop did have some exclusive merchandise but I managed to avoid the temptation – although I could not say no to the official programme in all its full-colour glory.

I was in Bond heaven and found it hard to stop smiling – my wife and daughter who I suspect agreed to come along mainly to show willing enjoyed it too. If it doesn’t get a permanent home Bond in Motion will be at its present location until the end of the year at least – but don’t put it off; get yourself some movie history next time you’re in London. For a place to stay nearby, we recommend the Holiday Inn at Bloomsbury as an excellent base for your time in the city.

Around the World in 15 Taxis

Idyllic Destinations To Visit This Winter