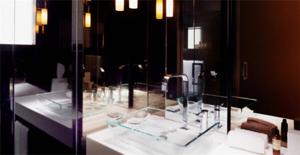 Both, as well as the aforementioned lounge (the area formally known as the lobby) with free coffee and pastries. I didn’t get the chance to eat in the restaurant but it has a good reputation and serves locally-sourced food.

No, that would have been the icing on the cake but you’ll likely be busy enough in New York not to miss such facilities.

No, it would have been extra if I had wanted to eat at the Andaz. Breakfast here is from an interesting-looking menu rather than a buffet and the prices are rather high.

Friendly and efficient staff and smooth check-in. When you walk in you enter an open lounge style area and there is no front desk as such. You are immediately greeted by your very own ‘host’ with a tabnlet PC who checks you in and attends to you for the whole of your stay. It’s a very American thing, and a little disconcerting at first for us foreigners at first, but the staff are knowledgeable and helpful. Quick and efficient check-out – you can bring up the bill on your TV and settle it before leaving your room.

If you book through the hotel you can earn Hyatt Gold Passport points. As ever, make sure you join up if you are not already a member. The Hyatt scheme is okay although their hotels are thin on the ground outside of the USA. You may be able to redeem Hyatt points into another scheme or promotion as I did – swapping them for a lot more US Airways points.

The hotel website encourages those booking meetings to partake in recycling and other green measures – otherwise I found little specific information but will investigate further and update this review when I get a response from the hotel.

The bill for three and a half nights (an extra half day due to flying out late at night) came to around USD 1500.00. In my defence, the US Dollar was extremely weak against the Norwegian Kroner at the time… Rates – as usual – drop sharply at the weekend. You are basically looking at around USD 400 a night and watch out for the sales and city occupancy taxes which are unfortunately hefty in New York in general.

Some may complain about the location but I found it to be a plus. There is also an Andaz on Fifth Avenue.

If I really had to find something I guess breakfast could have been thrown in for the price. But you are hardly stuck for options in NYC, all of which beat a hotel…

I loved my stay here – it’s cool without being more form than function. The standard (and the price) is high but it genuinely felt worth it. The only factor stopping me awarding the full 6 points is the cost – you really need to be splurging like I was…