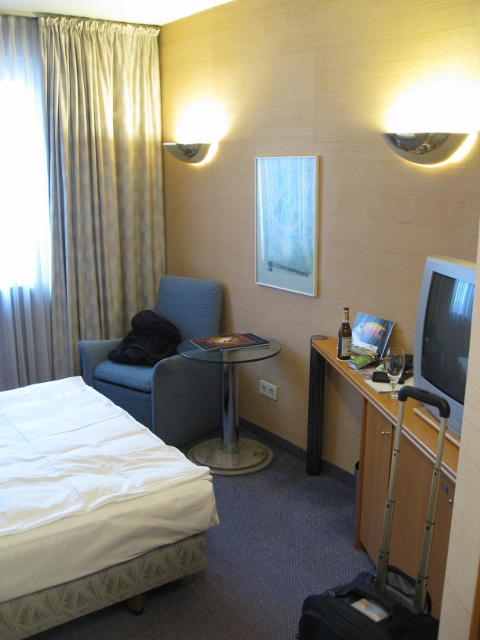 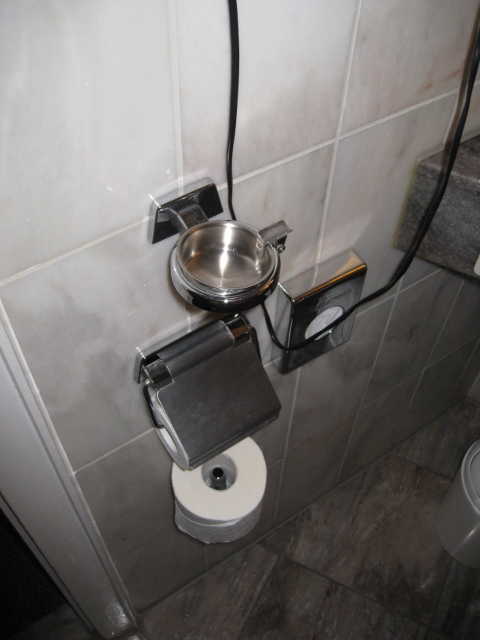 Yes both – the bar was very popular and prices were okay – especially given the copious amounts of unusual snacks provided with each beer. I enjoyed an excellent dinner in the restaurant which was only spoiled by the late arrival of my wine – after I’d polished off my lamb main course. Apropos the ash tray in the bathroom thing – this is a major feature of many German hotels which has yet to be removed in these days of the smoking ban. This is where the Kempinski gets a big boost. There is a beautiful indoor pool which is actually big enough to accommodate more than three guests at a time. In addition, and open all year-round (within reason) the hotel offers a heated outdoor pool with a sauna cabin which is a nice touch. I spent a pleasant hour ploughing up and down in the rain before sweating it out in the sauna. The grounds around the hotel (and its lake) are also pleasant.

More extensive spa facilities are also available (at a price) but I didn’t try any of these.

Nope. It costs EUR 29 per person which is quite a hefty charge but I had to leave so early that I was unable to test the buffet.

Excellent service from check-in to check-out; the concierge knew his stuff and could provide tips if you wanted to go into the city for the evening. It was also very easy to book a taxi even for the crack of dawn and you can arrange to charge it to your room if you so desire (a convenient touch).

Yes, the Kempinski brand is a member of the Global Hotel Alliance and you can earn points in the GHA Discovery scheme. I found the promotion for this a little over the top; after staying one night I would be awarded with my first “amazing Gold level Local Experience”, which turned out to be a choice of newspaper, complimentary internet access or complimentary bottled water. “Amazing”?

Not a lot of information provided. The usual efforts are made to limit cleaning of towels but I couldn’t find anything else specifically addressing environmental measures. I’ll update this section if and when I hear back from the property.

Via third-party sites you can get a room for as little as US$100, but you’ll be in one like I had. Sometimes you can get a good deal from the hotel itself and it’s always worth asking them to match any quoted rate.

Internet access should be free; breakfast could also be included or at least cheaper.

Advertising a non-existent shuttle bus from the airport was bad – they have now changed the website though. The type of room I had was definitely not what you’d expect from a five-star property. I know that the difference between four and five stars is mostly in service and uniqueness but this felt more like three stars.

Despite the room I had, as long as you get a newer one this is a good option for staying near (but not at) Frankfurt Airport. The leisure facilities and restaurant add greatly to the experience and if you get a good deal this is an excellent choice.