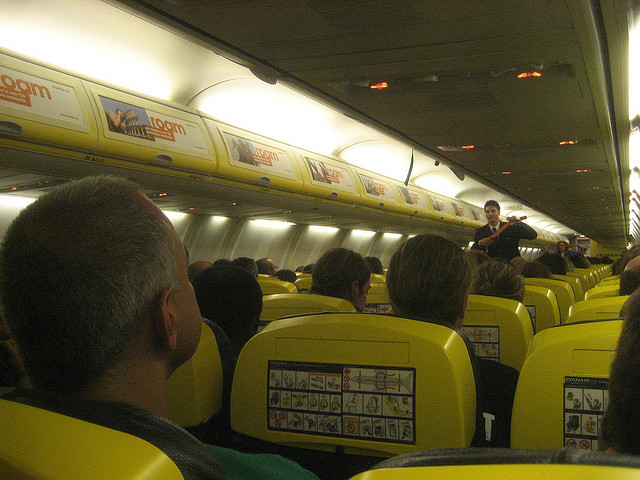 That Michael O’Leary of Ryanair – he’s a card…

Well, that’s one word of many I guess you could use. So what’s the cheeky chappie been up to now?

Well in his never-ending quest to  squeeze as many Euros as possible from anyone desperate enough to fly on his comedy airline, he apparently came up with the idea of offering standing-only tickets.

Hahaha! Yeah right. Even he wouldn’t try that, surely?

Believe me, there seems to be no depths to which he isn’t prepared to sink for a profit. This madcap scheme comprised of fitting a Boeng 737-800 with 10 rows of ‘standing berths’ in addition to 15 rows of standard Ryanair cattle class – increasing the average capacity of a flight from 189 passengers to 230. He envisioned something along the lines of a classic London Underground carriage with customers ‘strap-hanging’ as was the custom on the Tube.

Plenty of room to squeeze a few more punters in there, surely? Image obtained from Flickr.com under Creative Commons (c) Alex Pang

Surely this is just another PR stunt?

Almost certainly. O’ Leary is clearly a firm believer in the maxim that “all publicity is good publicity”. However the plan was actually put before regulators which presumably meant actually spending some of the cash he’s managed to bleed from his passengers over the years.

Who then threw it out?

Yes. According to Ryanair an “unnamed regulator” refused its application for test flights. Or as he put it at a press conference in London, “we have asked the question could we run some trials on this and the immediate response is somewhat negative.”

I’ll bet. They must have thought it was April 1st, or some hidden camera show. So how much was he planning to charge folk for the unfeasibly dangerous privilege?

Rather than paying £25 per ticket to actually sit down, strap-hangers would be expected to cough up between £1 and £5. Presumably the £5 tickets have you dangling by the window or emergency exit…

Class. He’s certainly not short of ideas, at any rate.

No…Ryanair has floated the idea of putting passengers in bunks in the hull and believes that flights need only one pilot instead of the regular two. Most famously O’Leary stated that he wanted to charge customers for using the toilet. This would not only bring in extra revenue but would also allow Ryanair to reduce toilet facilities to a minimum and use the space freed up for extra seats. Although this scheme seems to have been put on ice for the time being Ryanair might consider copying Pakistan International Airlines. When faced with a full plane, a PIA captain had a flash of inspiration – and put two extra passengers in the toilet of the Lahore-Karachi flight instead.

I think I’d rather be bumped…

What do you think of Ryanair and its ‘eccentric’ boss? Would you accept ‘standing rooom only’ if the price was low enough? Would you even fly Ryanair? Let us know by adding your comments below!