It’s hard to believe you’ll get bored in Orlando, Florida – the city excels in providing entertainment for visitors. But as well as the more obvious attractions such as the big-name theme and water parks you can also try out a range of niche pursuits when you need a break from Mickey and Harry.

On our last visit we decided to give skydiving a go – indoor skydiving, that is. We soon discovered that iFLY was no pale imitation of the real thing, but a fully-fledged flying experience – the only downside of which is that you will leave eager to throw yourself from an actual plane. And that’s going to cost a lot more than iFLY – and be more of a struggle to sell to sceptical partners…

So just what is this whole indoor skydiving lark, I possibly hear you ask? Well, it’s not just great fun, it’s also a competitive sport – but that’s for the pros. For newbies like us, it’s enough to know that iFLY is basically a vertical wind tunnel that creates the same free fall conditions that you would deal with if jumping from a plane.

In fact since the average duration of the free fall part of a ‘real’ skydive is around 45 seconds you get a little longer to enjoy with iFLY as each flight is 60 seconds and two are included in your session. Also, you don’t have to worry about failing to deploy your parachute or landing on someone’s roof.

I know what you’re thinking – it’s like a huge hair dryer and you float on top of the column of air. Simple. Only it’s not quite like that, as the fans are actually above the flight chamber and the air is forced down the sides and then back up under the guy or gal in the tunnel.

In non-layman’s terms, high-power axial fans mounted in the upper part of the tunnel generate the wind which is channeled and directed down the sides, underneath the flight chamber and up through the floor of the flight chamber, lifting flyers into the air.

iFLY kindly provide a graphic of the airflow of one of these ‘recirculating’ wind tunnels on their website:

So with all that geek stuff out the way, let me tell you how much fun we had.

Booking your spot – and signing away your life

The Visit Florida tourist board had kindly issued me with a ‘VIP Passport’ granting reduced ticket prices at many attractions, including iFLY, in return for coverage on the blog. I contacted the company and they arranged an early morning session for the three of us.

All I needed to do was go online and electronically sign a waiver form to free iFLY of any liability for any harm – or death – that may occur. That was a slightly weird feeling, but in the land of litigation such precautions are hardly surprising as losing a single lawsuit would probably mean game over for iFLY.

The website has a lot of pictures and video clips to prepare you for your flight and the booking process is straightforward. Just find an available time slot and remember that you need to be at the iFLY centre an hour before your allotted session begins.

iFLY Orlando is conveniently located over the road from Wet ‘n Wild and not far from Universal Orlando Resort. Well, convenient if you have a car, and let’s face it you’ll be in a minority if you don’t in this town. There’s plenty of parking right by the wind tunnel, which as you can see is a big beast. On entering the office we checked in using an electronic terminal – ably assisted by the helpful staff – and if at this point you haven’t signed a waiver online you can do this here. They’re not going to let you forget it, I assure you…

We were then shown the way to the waiting area, up the stairs in the actual tunnel building. I recommend arriving a little over an hour in advance so you can watch others flying before you. On this occasion there were a couple of youngsters shooting around and my first impression was that it was going to be a piece of cake; a fun piece. However, we soon found out that these guys were concluding a summer camp, whereby they had taken flights every day for a week – so it might not be quite the same for us newbies.

After they were done their instructor had his chance to really show off – and underline the difference a few hundred hours of practice can make.

That reminds me – here’s a video I put together showing our arrival and these guys doing their stuff:

Get your kit on

By now the rest of our group had arrived and our instructor came to meet us. Striker by nickname and a great guy by nature, he told us that the first step was to get changed.

The iFLY website provides guidelines on what to wear – well-fitting, lace-up trainers or running shoes and casual clothes, preferably trousers and a shirt with no collar.

You then put your flight suit over your regular clothes – this is a one-piece with handles so that the instructor can grab you if you start losing control. Goggles complete the ‘uniform’ – if you wear glasses you’ll be given larger goggles you can wear over them so as not to have to fly blind.

Earplugs are also issued to protect a little against the noise, although these often fall out and the volume isn’t that bad anyway.

Striker showed us a brief instructional video which explained the principles of flight – the key was to stretch out with legs and arms slightly bent and to keep your head up. We learned a few hand signals that the instructor would be using, mostly to tell us to make some adjustment to our position. After being assured that we would look ridiculous in the wind tunnel but that photos and video would be available for purchase afterwards should we so desire, it was time to move into the tunnel.

One person enters the flight chamber at a time, along with the instructor, while the others wait on a bench right outside the glass wall. We were at the end of the row so had plenty of time to watch the rest of the group go first – and this is when the expected excitement/nervousness combo kicked in. I’m sure it’s somewhat worse in a plane waiting to exit – but it was tense, nevertheless.

When your time comes you enter the chamber and fall forward onto the air which provides real resistance, and the tunnel operator screws up the power until you and the instructor are flying.

The windspeed is regulated by the operator based on the weight and skill level of the person in the tunnel – clearly the speed is a lot lower for kids so there’s no risk of losing your offspring up the chimney, so to speak.

Yes, body flight is harder than it looks and perhaps more difficult that you’d expect – it’s easy to be distracted, especially on your maiden flight when the fact that you are actually flying in a tube is enough to make you forget how to stay that way and start looking down.

Doing that will make you rapidly lose height until you are tugged back up and rebuked with a hand signal or too. I soon discovered how tiny movements – such as unintentionally twisting my hand just a fraction – have big consequences; I started spinning round until I flattened it out again.

At no time did it feel dangerous though – Striker was in full control and led me back to some semblance of stability. 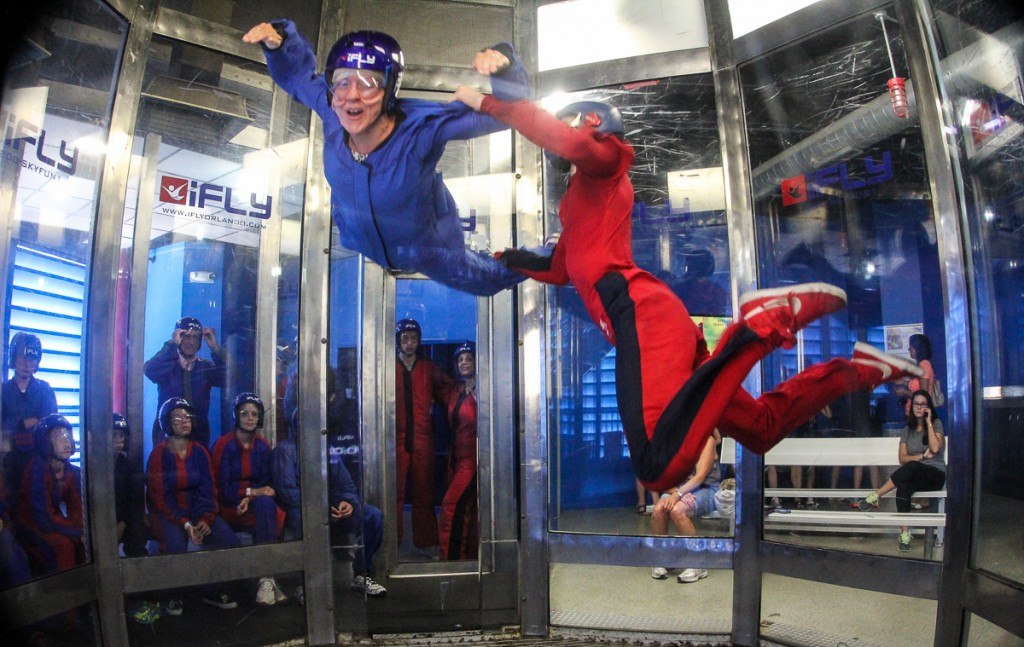 Sixty seconds doesn’t sound long but it was enough for a good first round – all three of us loved it and couldn’t wait for the second flight. Mari Anne managed to fly in a more controlled manner than either myself or Rebecca and received an extra commendation on her certificate – but wasn’t entirely happy with the unflattering photographs that accompanied it…

As an optional extra you can pay a few extra bucks to fly high at the end of flight two. We hadn’t chosen this option in advance but decided we’d have to try it after seeing the others in the group disappearing up the wind tunnel with Striker and returning down spinning in a circle.

It was well worth it – the sensation is amazing. When our time was up we returned our equipment and each received a personalised certificate as a souvenir.

To sum up, iFLY is the most fun you can have in a confined space wearing a one-piece and goggles. More than that, it’s an incredible experience and something everyone should try. There are few restrictions – iFLY has hosted flyers from 3 years old up to 103; as long as you are in normal health you’ll soon be floating on air.

With locations in the US, Canada, the UK and Asia you don’t necessarily have to visit Orlando to give it a shot either – but if you are in town, pay them a visit for an unforgettable flight. And start saving for the outdoor skydiving course you’ll want to try afterwards…

We booked the ‘Earn Your Wings’ introduction package (2 flights for 1 person) which costs USD 59.95 each at Orlando. Other packages are available, see the iFLY Orlando website for full details