This article is part thirteen of the series “Trip diary: Three weeks on the road in Florida” And so for something completely different. After three days of thrill-seeking at Orlando’s theme parks we hit the road to head north for the oldest permanent settlement in North America. With a quick stop at the Kennedy Space Center en route it was early afternoon when we arrived on the outskirts of this small city on the eastern coast of Florida.

Dating back to 1565 when it was established by a Spanish general, St. Augustine was destroyed by Francis Drake in 1586, a pirate by the name of Robert Searle in 1668 and then by the forces of James Moore of Carolina in 1702. With the exception of the fort of Castille de San Marcos the rest of the city is thus no more than a couple of hundred years old, but this is still quite something in American terms.

It’s a charming place with narrow streets perfect for wandering and although it is a far cry from the Magic Kingdom there is a touch of historical theme park about the city and at times it feels as if there is a marketing angle to everything. Yet it manages to avoid sliding into tackiness and St. Augustine has plenty of sights and a good beach nearby – making it a worthwhile place to spend a few days.

The town is extremely popular with domestic tourists but little known to foreign visitors and is a side of Florida the majority of those from abroad never see. We managed to pack in quite a lot in the two days we had in town but we didn’t see it all – I would definitely like to return for longer. Anyway, we ticked the following off the list: Our hotel was conveniently located right on the edge of Old Town with the many attractions of St. George Street close by. Touted as the oldest wooden schoolhouse in the USA, the building you see in the picture is the, er, Oldest Wooden Schoolhouse. There is some argument as to whether St. Augustine has the right to claim this but it’s old, for sure.

Believed to have been built between 1800 and 1804, if you pay your four bucks and go inside you’ll find the classroom as it must have been back in the day with the exception of slightly spooky robot children and teacher… A couple of blocks from the hotel lies the Old Drug Store (they believe in calling a spade a spade in Florida, clearly) which is leaning more than a certain tower in a certain Italian town.

It opened its doors in 1887 and was still operating until the 1960s; but now contains an amazing collection of medicine bottles. The Store is worth a look and free to enter. Billed as a living museum, volunteers recreate daily life in the various periods.

Guided tours are offered and led by actors in costume but we did just fine with a map and enjoyed exploring the buildings and gardens. Children can complete a type of treasure hunt by filling in information learned by visiting the various parts of the site. We were shown how the soldiers loaded and fired their muskets and chatted with Gary Kennedy, a local boat-builder working on a 55 foot replica Spanish vessel from 16th Century sketches. He’s using modern tools though – back in the day it took an entire team of 30 workers several years to build a ship.

Nevertheless it will keep him occupied for some time to come so say hi if he’s there when you visit.

We also watched the blacksmith at work and craftsmen fashioning necklaces from leather before climbing the watchtower for the wonderful view over the harbour to the sea with the fortress in the foreground. The British quarter has a “publick house” with good ale and pub grub – it makes a nice place for lunch and offers shelter from the sun in a historic atmosphere. The staff are dressed in period costume too. 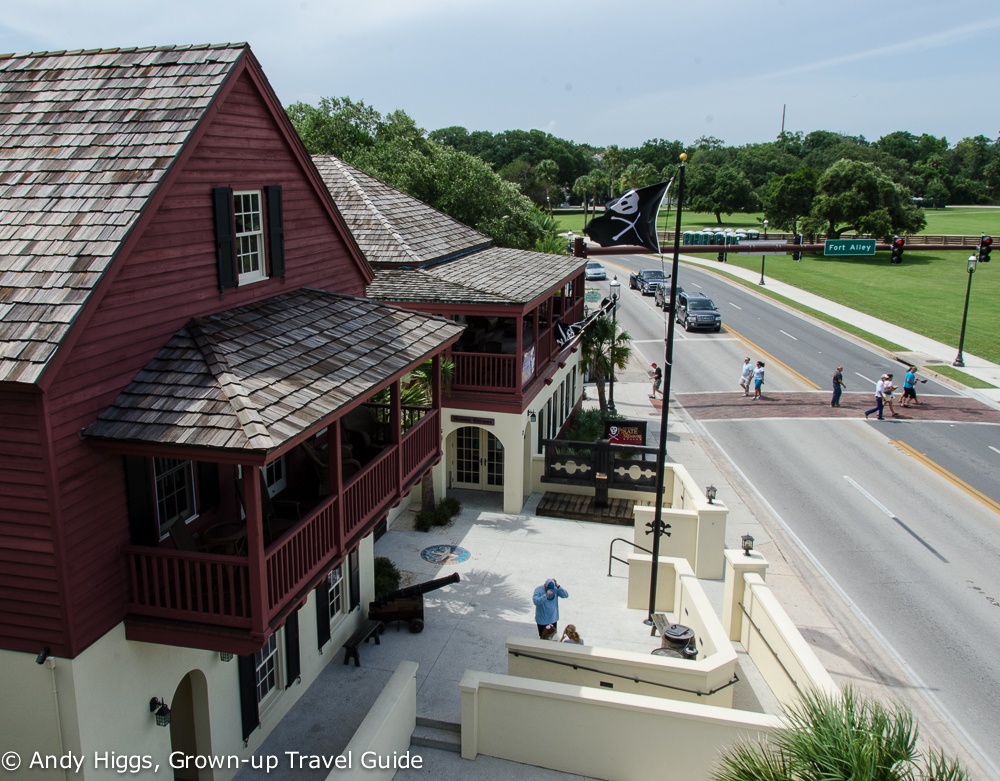 As mentioned above, the entrepreneur Pat Croce runs this place and he has a big thing about pirates – most of the documents and artifacts in the Pirate and Treasure Musuem come from his own collection. This was one of the highlights of St. Augustine for Rebecca and I – there are interactive elements as well as static exhibits such as a 400 year old treasure chest. The museum contains one of only two surviving ‘Jolly Roger’ flags – from 1850. The treasure hunt here is great fun and the audio show representing the demise of the dreaded Blackbeard is highly atmospheric. The latter was actually designed by Disney, and the Hollywood exhibit in the final room includes the actual sword used by Johnny Depp in ‘Pirates of the Caribbean’ as its star attraction. Allow an hour or so to explore the fortress on the water’s edge – the structure is in amazing condition considering it was built in 1672. Smart design helped the construction outlive the rest of the city with its diamond-shaped ramparts allowing serious firepower and fourteen foot thick limestone walls proving impossible for British troops to breach on two separate attempts.

Now operated by the National Park Service the fortress contains exhibits about everyday life for those stationed here and the failed attacks. There are free talks given on a regular basis and the views from the ramparts are as good as you’d expect from a strategic defense like this.

The souvenir shop has some interesting books about piracy and the history of this part of Florida.

Flagler is a name that will be appearing often in these Florida articles, so we may as well deal with him now:

Henry Morrison Flagler was responsible for building the railway from Daytona to Key West and is inextricably linked with the development of the eastern coast of Florida. He made his fortune with John D. Rockefeller in Standard Oil. Flagler visited St. Augustine and loved the city and its climate but not the absence of hotels and transportation. He decided to out his money into developing Florida to attract visitors, focusing on the wealthy.

This is where Flagler College comes into the story. Originally the 540-roomPonce de Leon Hotel, this extravagant property is now a liberal arts college and surely one of the most stunning campuses in Florida. Dating from 1888 and built by Henry Flager in his ostentatious plan to launch St. Augustine as a winter getaway for the rich and shameless, the hotel never fulfilled its potential and reopened as a college in 1968.

If you want to learn more take a guided tour during which you’ll visit the lavish dining room with its stained-glass windows and the enormous fireplace in the Grand Parlor beneath Tiffany crystal chandeliers. Right over the road from the ex-Ponce de Leon Hotel, Henry Flagler built the Alcazar, another upmarket hotel. This one closed its doors in 1931 and is now the St. Augustine City Hall. The building is a fine example of Spanish Renaissance architecture and also contains the Lightner Museum. This collection mainly consists of a strange mix of paraphernalia obtained by Otto Lightner, a publishing magnate from rich families who fell on hard times during the Depression.

I found the building itself to be more interesting than the Museum exhibits – especially the Ballroom Gallery. You can’t fail to notice this building next to City Hall – built as a copy of the Alhambra in Spain it stands out as much now as it did when built in 1883. Henry Flagler was so taken with the place that he offered to buy it from the slightly odd architect Franklin W. Smith, but was turned down.

These days Villa Zorayda contains mementos from Smith’s life and antiques belonging to its current owner. The audio guide is highly recommended, if only to get the full story behind the ancient Egyptian rug made of cat hair and considered sacred. The British influence is never far from sight in St. Augustine. There are signs all over the city providing visitors with detailed information about the town, its history or in this case the state. St. Augustine also has a number of beaches within easy reach of the Old Town. Mari Anne and Anne visited out the main, family-oriented stretch of sand on Anastasia Island, just a ten minute taxi drive over the Bridge of Lions and were impressed – it certainly looks good from the pictures they took, too.

Eating, drinking and being merry in St. Augustine

There are plenty of bars and restaurants and the city has a reputation for good food. To finish up here are the places we tried and can definitely vouch for:

A stunning building whose walls are covered in intricately painted tiles, Columbia serves traditional Cuban and Spanish food in a very traditional manner. We had lunch here and the sandwiches were enormous and tasty. Would be a safe bet for dinner too. Quality mojitos mixed at the table don’t hurt, either…

As stated in the section on the Colonial Quarter, this old British-style “theme pub” has good food and tasty beer. Another place for lunch. My favourite. Live music in the afternoons and evenings, great atmosphere and an open air deck with excellent views of the harbour and fort.

Good food at reasonable prices and often live music. Relaxed atmosphere and the balcony overlooks the pedestrian street in the Old Town, so a fine place to watch the world go by.