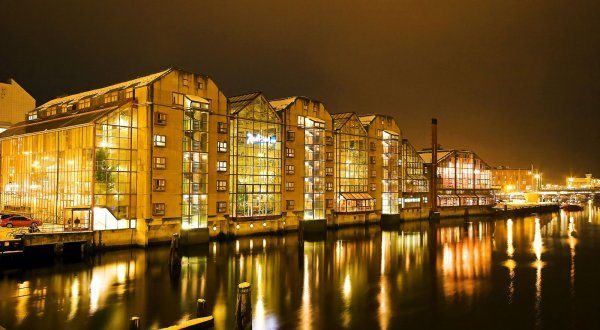 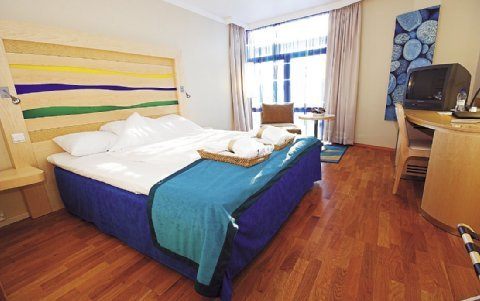 Yes – there is a downstairs bar next to the lobby and several seating areas including an atrium area with a (somewhat obscured) river view. We didn’t have the opportunity to try the restaurant but the wine list was surprisingly good and not too expensive. Yes, they have a small (but little-used) pool and sauna facilities in the basement. It’s no Olympic size but perfectly adequate and seldom crowded, especially after breakfast.

It was, and despite being a vast improvement on the last time we stayed (I’ll spare you the details) breakfast was average at best. There was enough space even at the busiest time and food did not run out, but the range of offerings was a little uninspired. And a quick tip to management – it’s all very well investing in a stacking plate warmer but it would have been an improvement if you switched it on…like the Clarion this hotel doesn’t seem to want to even try to take up the fight with the award-winning breakfast at the Rica Nidelven a stone’s throw up the road but I don’t see why they couldn’t have a go.

This was good – if I’m nit-picking they could have had an extra person at reception as the few people ahead of us definitely kept the one behind the desk occupied longer than anticipated. But basically service was above average and certainly way ahead of the Clarion.

Yes, it’s a Club Carlson hotel so join up if you’re not a member. Again I was ‘mattress running’ here to gain 50,000 extra points in a summer promotion; it is well worth keeping an eye out for such offers.

Yes, they will be happy to do so.

Not a great deal of information here, so a tough one to call. I will update this section if I get more details from the hotel.

We paid NOK 950 for a double room, but rates begin lower for advance payment and summer specials.

The location is great and the pool is fine. The facilities are of a good standard especially if you get a low rate.

Breakfast could be improved upon and the entire hotel is crying out for a thorough modernization (which I believe is indeed on the cards).

Well the bathroom and the CRT TV were ugly, but other than that nothing was all that bad.

It seems that Radisson has woken up to the threat of all the new kids in town by polishing up its act in Trondheim and focusing on good service and value. We enjoyed our stay here and were pleased to see that the chain’s flagship hotel in Central Norway is back on form after a few years in the hospitality wilderness. Even after all these years the Royal Garden is still perhaps a good option in Trondheim and holds its own.