This is the latest article in the series detailing some of the many highlights of the Costa Brava in Catalonia. In case you missed them, you can read the post about Blanes here and the one about the Lloret de Mar restaurant Sant Pere del Bosc here.

The next stop on our press trip in September was the lovely port town of Tossa de Mar. I was a guest of the Costa Brava Tourist Board, but as always, my opinions are my own. Just 13km from its more rowdy younger brother Lloret, Tossa is clearly the more sophisticated of the siblings. Lloret is growing up fast though and it won’t be long before its past is long forgotten. Nevertheless, it’s amazing how different the two towns turned out – Tossa seems to have managed to avoid the overdevelopment and mass tourism that once blighted Lloret and other Spanish resorts and yet it has everything 1970s package operators would have been looking for. The town is an easy 90 minute drive from Barcelona but for the ultimate visual impact you should arrive from the sea. Fortunately that’s what we had planned, too – we set off from the harbour at Blanes with CharterLloret. 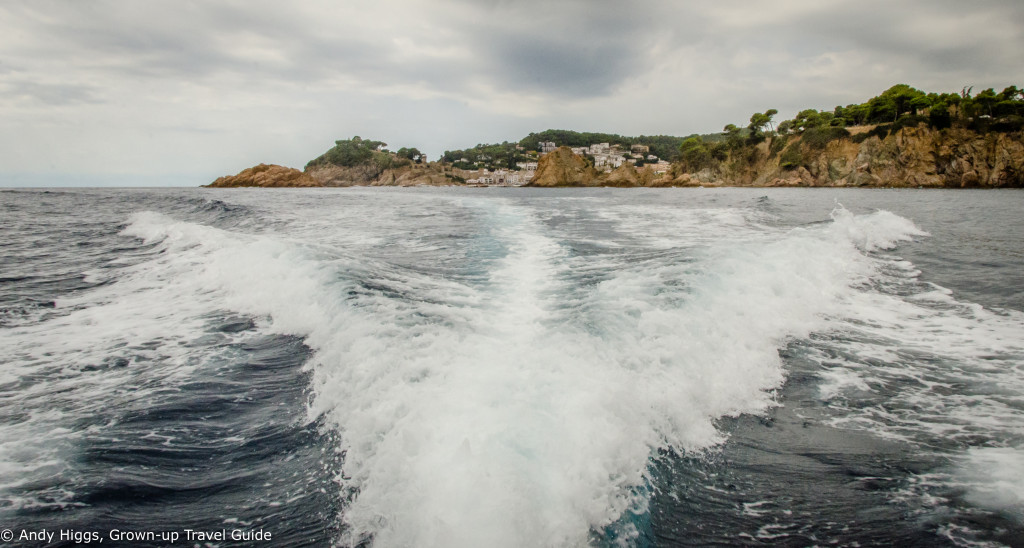 It’s a lovely trip, passing the Marimurtra Botanical Gardens which we had visited the previous day and several excellent sandy beaches and rocky coves. 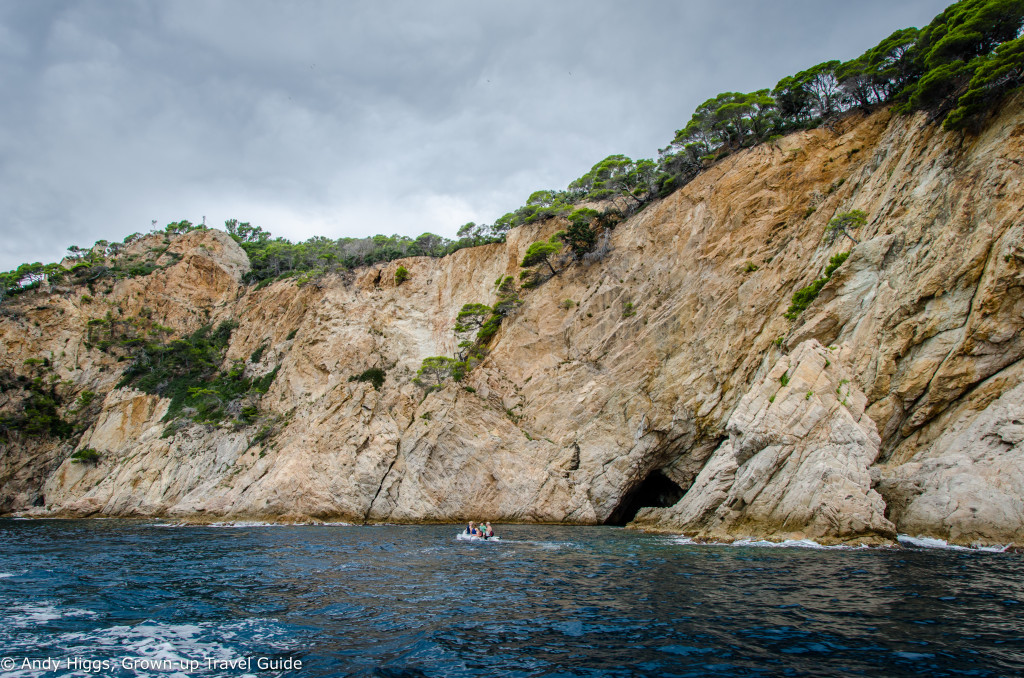 The cava soon flowed and the snacks appeared as we enjoyed a leisurely cruise on largely still waters along the rugged coast. 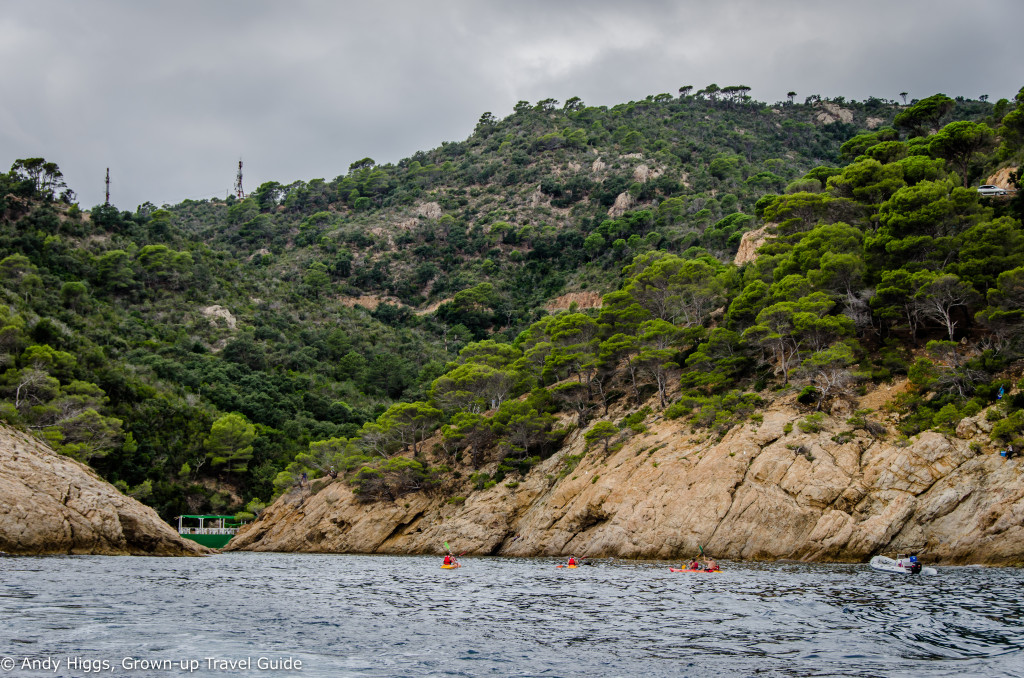 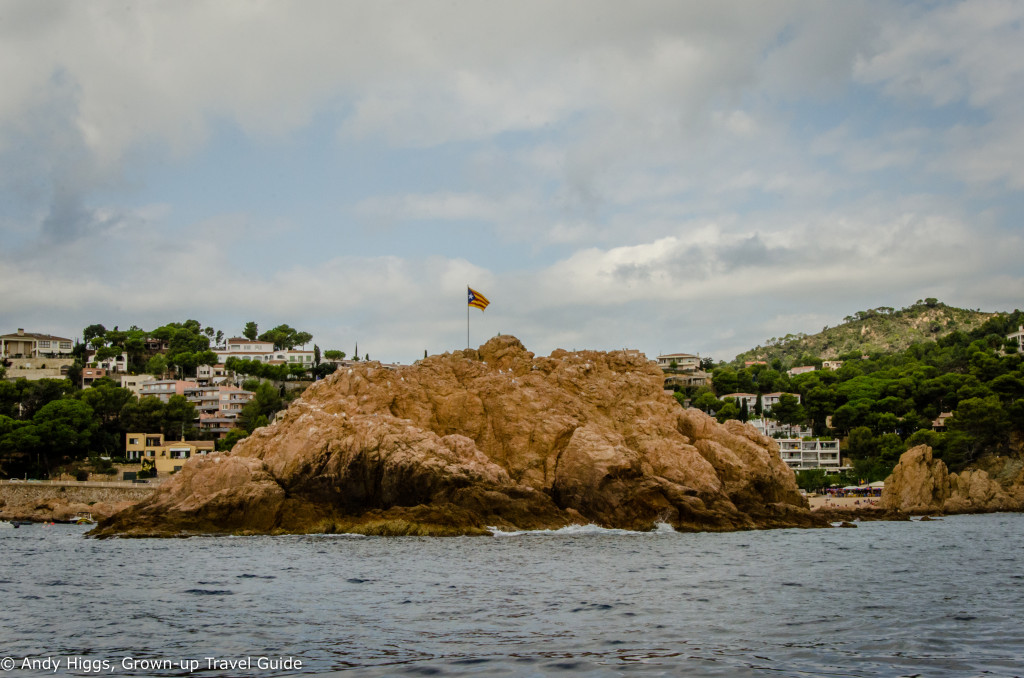 We stopped to edge into a cave and later to have a look at a couple of isolated beaches before the medieval walls of Tossa de Mar appeared on the horizon. 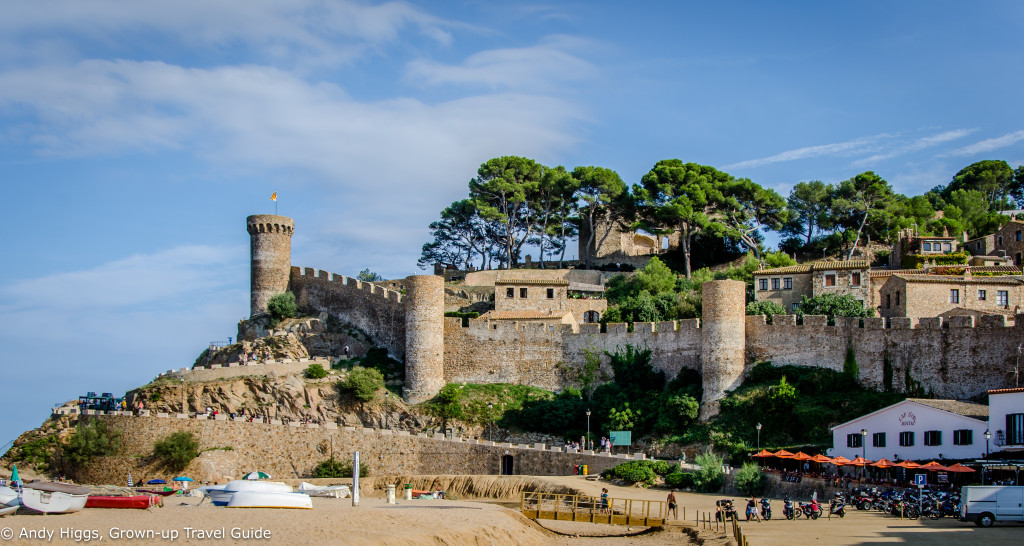 By the way, I put a quick video together of the boat trip right here:

Our captain gave us the full panorama of Tossa by piloting the boat to the end of the bay before turning around and heading back to land on the main town beach where a landing jetty awaited.

The weather cleared up as we stepped onto the sand and the sun began to shine – perfect timing! First on the agenda was lunch – it had been about an hour since we last ate, after all – so after meeting the local tourist office representative we made for the old town and the narrow street parallel on the outside of the city walls where a number of restaurants are located. 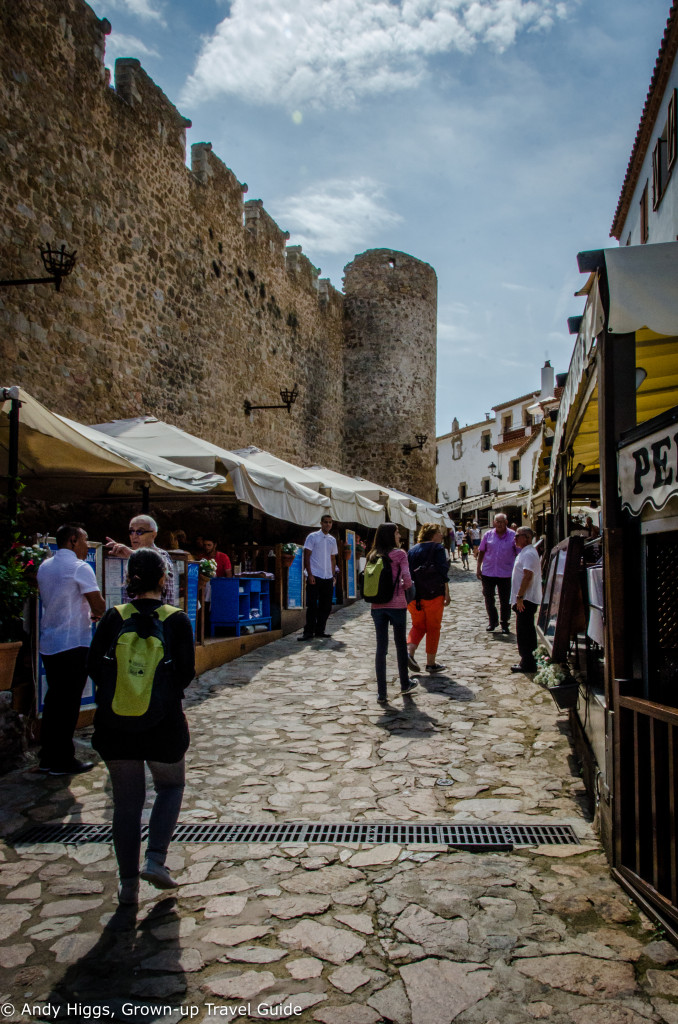 Lunch is always serious business in Catalonia, and this one was no exception. The restaurant had plenty of outdoor seating, both directly outside the main building and across the street against the city wall, all under awnings to protect against the now intense sunshine. 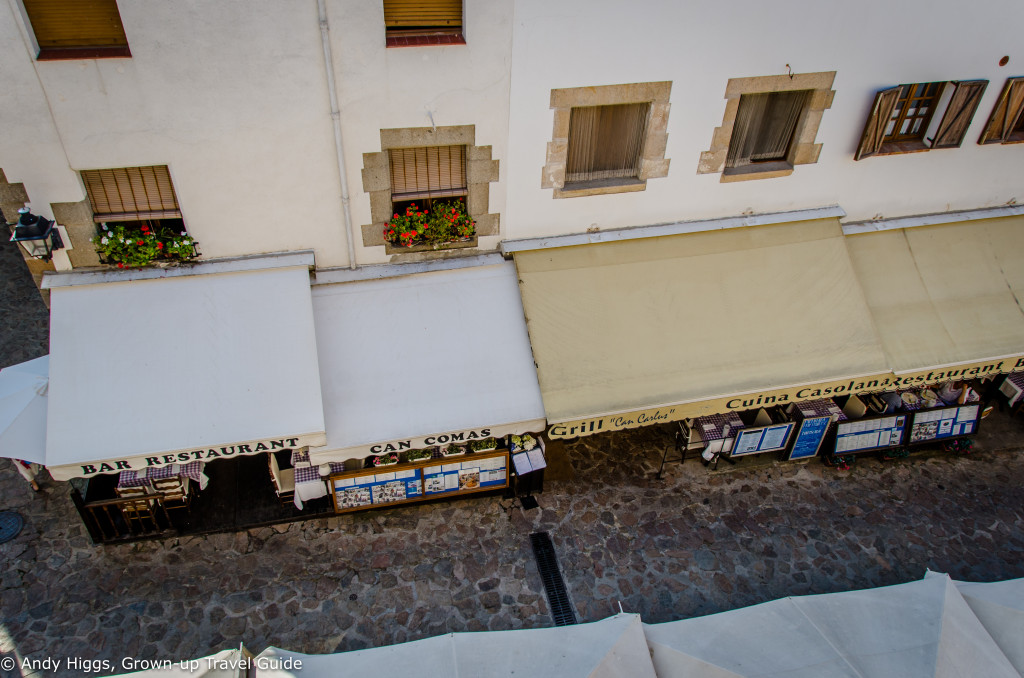 Can Carlus is known for its seafood and we certainly got to sample a good variety: we started with sautéed small prawns from Blanes, baked mussels, fried small squid, salt cod fritters and anchovy “suquet” (anchovy casserole).

Yes, I said we started with that.

Then came the main course – Gurnard “cim i tomba”. Cim i tomba is fish and vegetable stew and is a Tossa de Mar speciality. It was created to enable fishermen to cook an entire meal in one pot on a small stove while at sea, and is an incredibly tasty and hearty lunch – the mashed garlic added during cooking gives it a wonderful punch.

As if that wasn’t enough, we some desserts to try too – Crema Catalana (Catalonian creme brulee), chocolate cake with papantla vanilla ice cream and almond biscuit ice cream.

This was all washed down with a Verd d’Albera de Martí Fabra D.O. Empordà white and an Oriol dels Aspres D.O. Empordà rosé wine.

Let’s just say we were ready for a walk after lunch. It was time to explore the old town (Vila Vella) encased within the medieval walls. 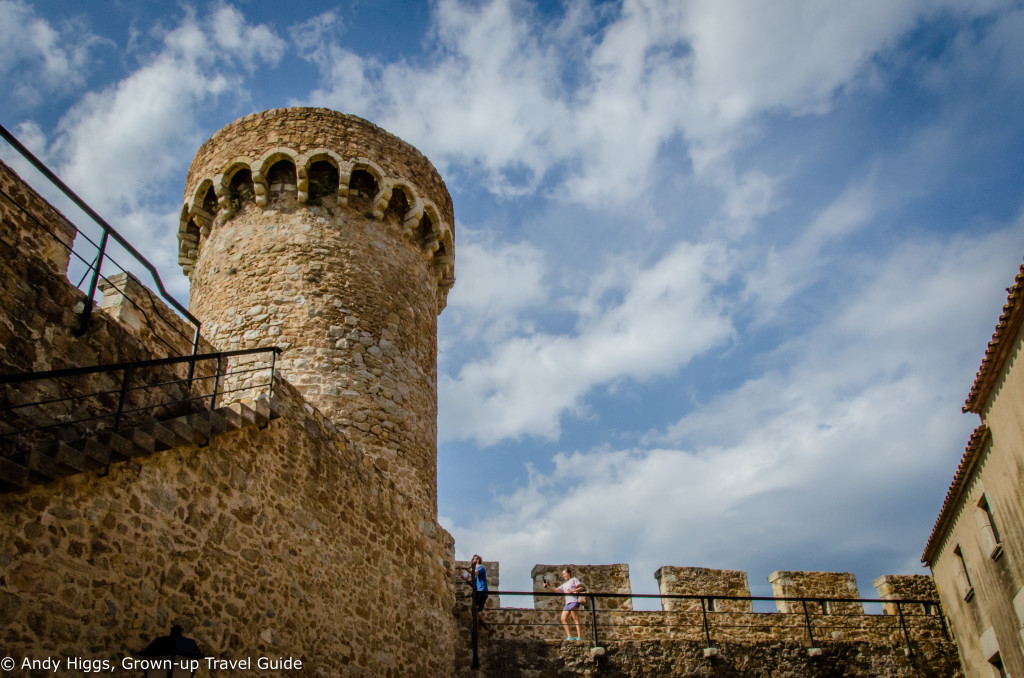 These date from the 12th century and visitors can walk along them for superb views of the rest of Tossa de Mar, the beach and the sea. Allow plenty of time just to wander through the maze of narrow cobbled streets and between the charming old houses, even if you haven’t also just consumed your own body weight in cucina Catalan. 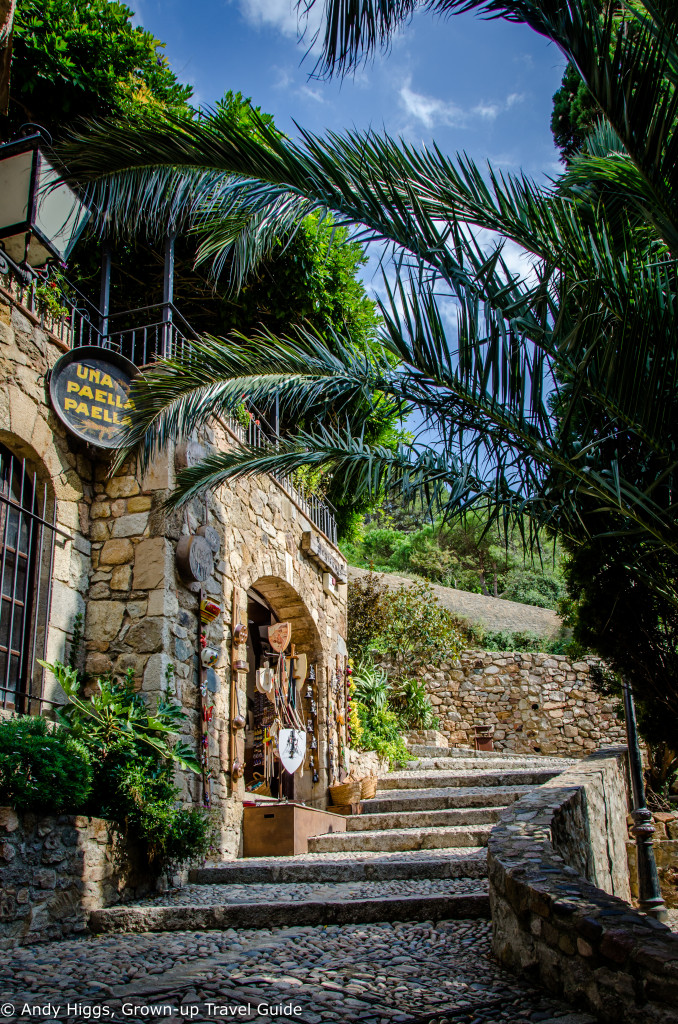 You won’t want to rush and there is plenty to see and the atmosphere is enticing.

At the top of the headland and looming over the Vila Vella is Far de Tossa which is home to an interesting exhibition on lighthouses. 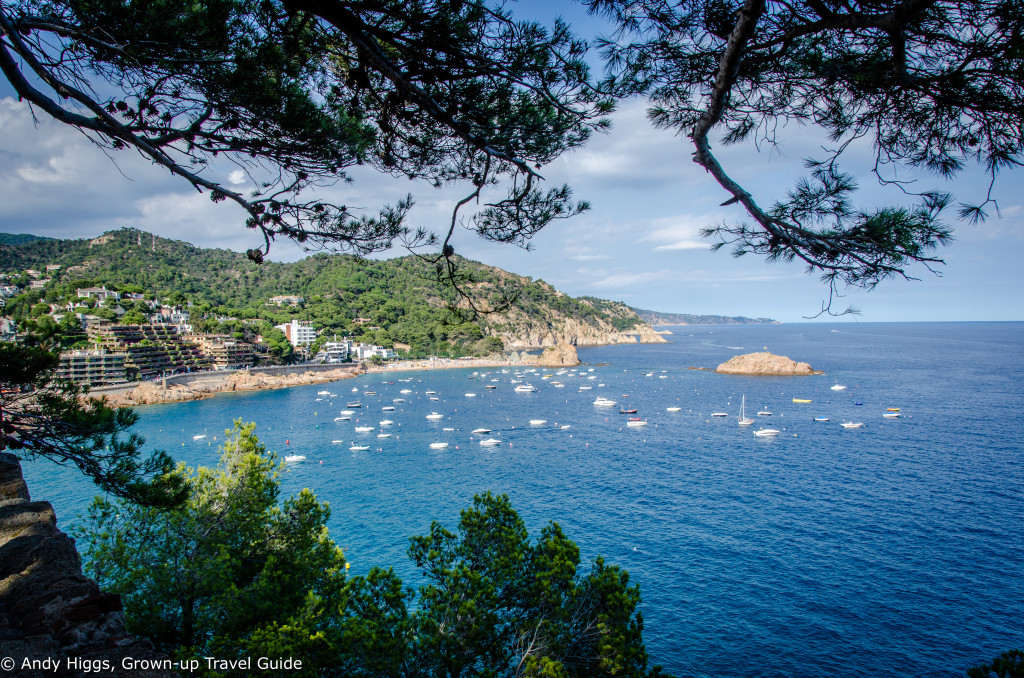 There are also spectacular views of the coast and town from here. 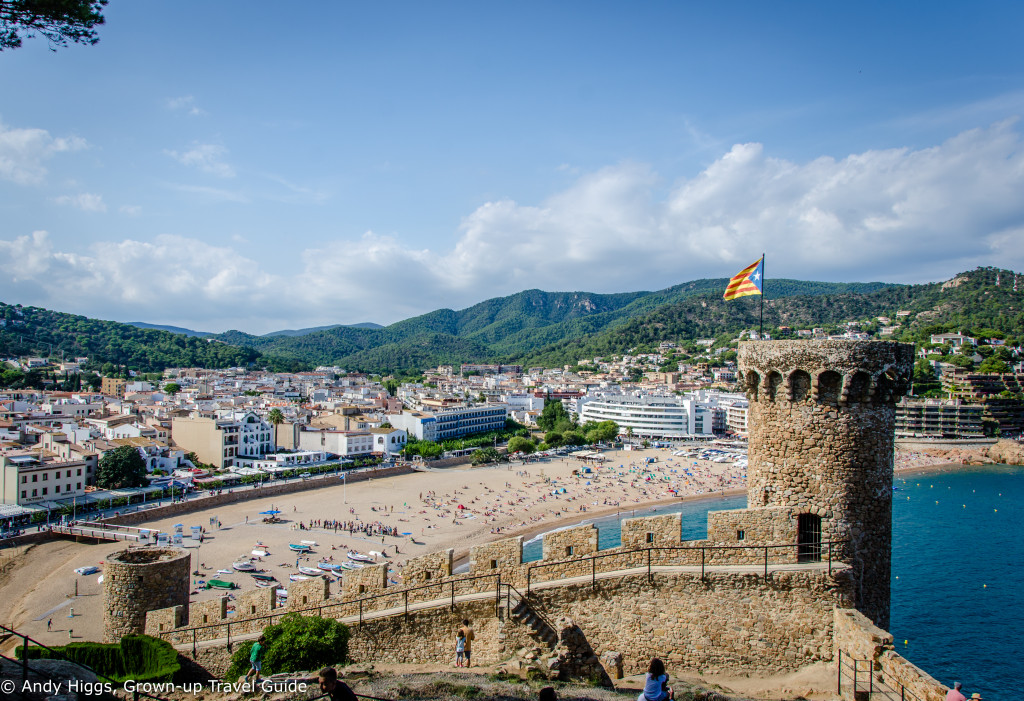 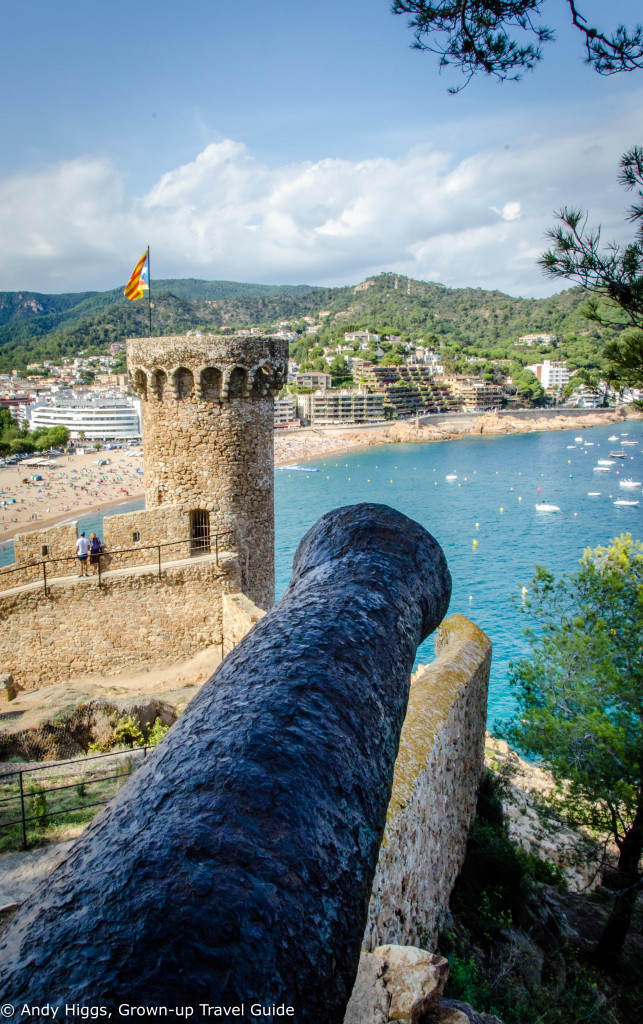 A little further down lie the ruins of a 15th century Gothic church and close by is a statue of Ava Gardner. The actress made the town of Tossa de Mar famous in her 1950 film “Pandora and the Flying Dutchman”.

Learn more about the town at this museum in the old quarter. Several Roman remnants found at a nearby villa site are on display as well as a painting by Chagall who spent his summers here and called Tossa the “blue paradise”. Tossa remains a haven for artists to this day. 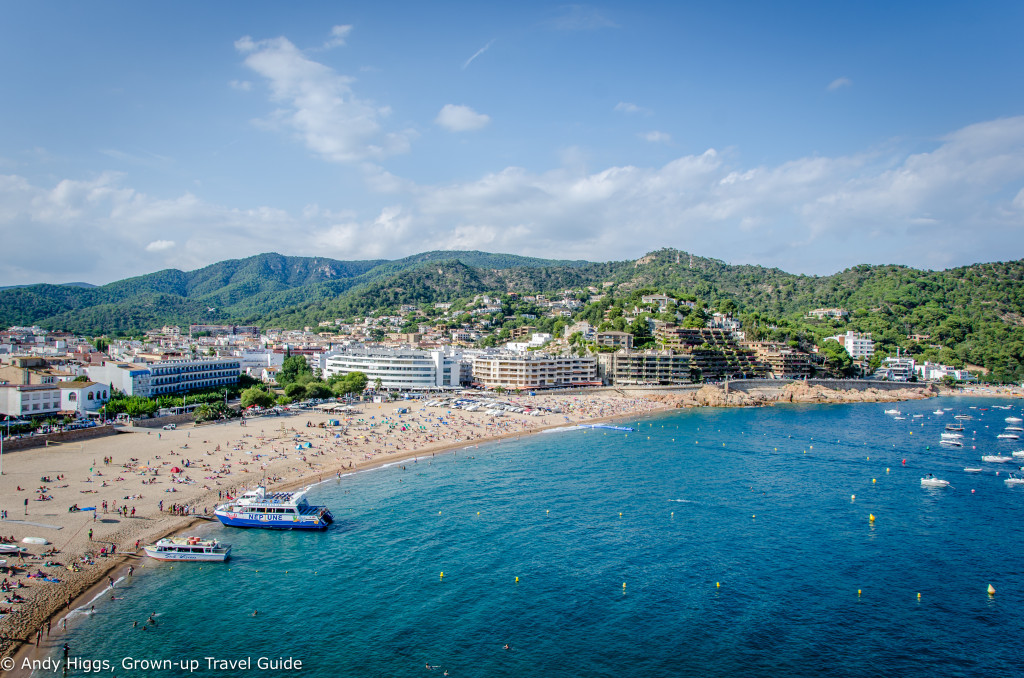 The main beach, Platja Gran, is very good but it does fill up – head for the small coves a little further in both directions if you have your own car or a bicycle for more privacy. The best beach in the town itself is Platja de la Mar Menuda just round the headland. Where to stay in Tossa de Mar 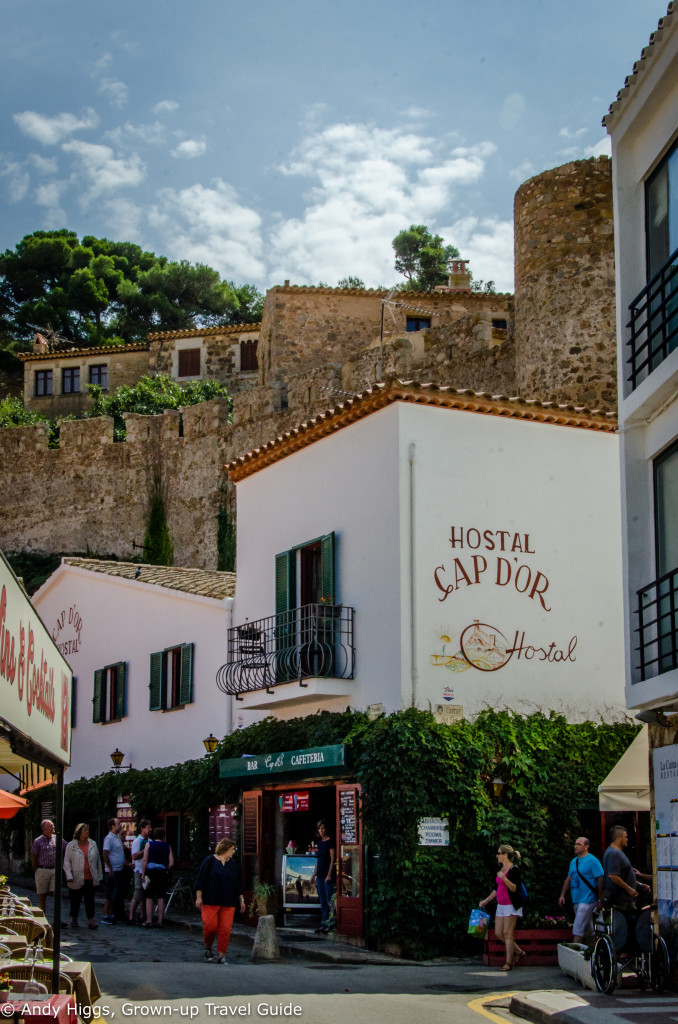 There are plenty of hotels and guest houses in the maze of winding streets below the city walls so you shouldn’t have a problem finding somewhere to stay. 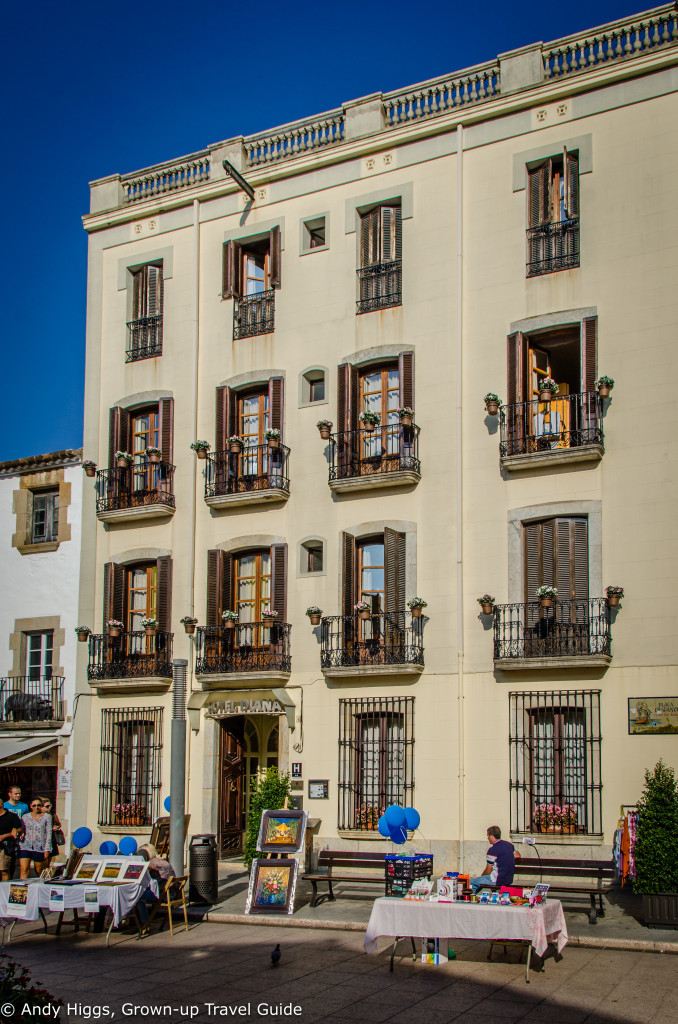 If you want to stay somewhere really unique, we had a look around the Hotel Diana and that’s the place I’d choose. 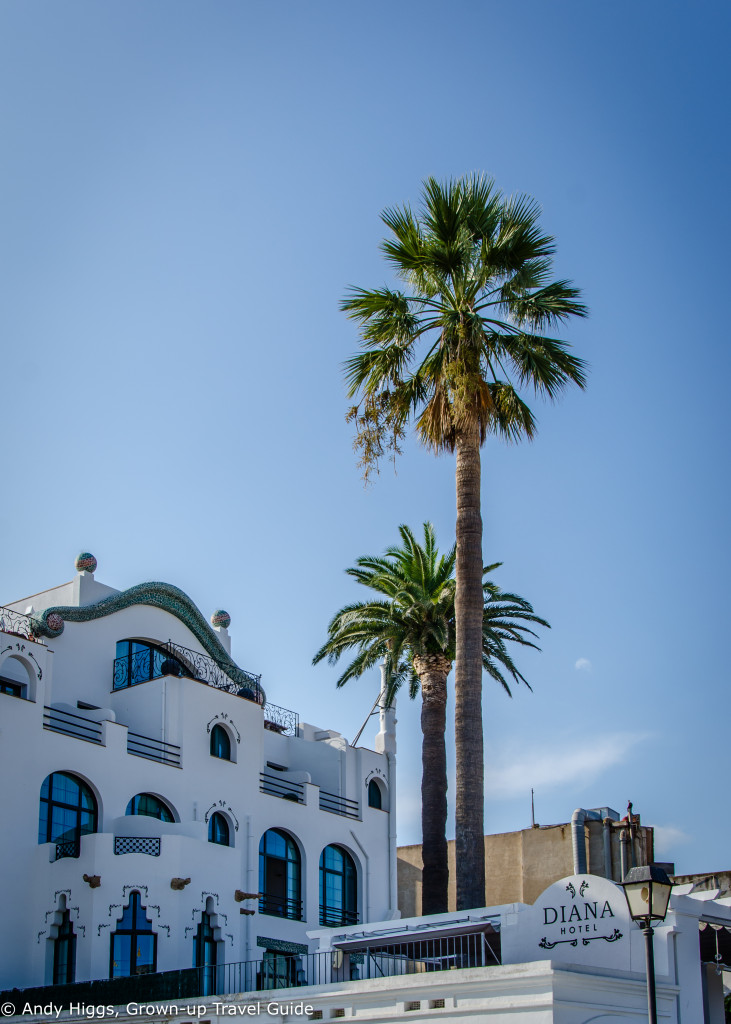 This stunning modernista mansion is right on the promenade with a bar overlooking the beach. 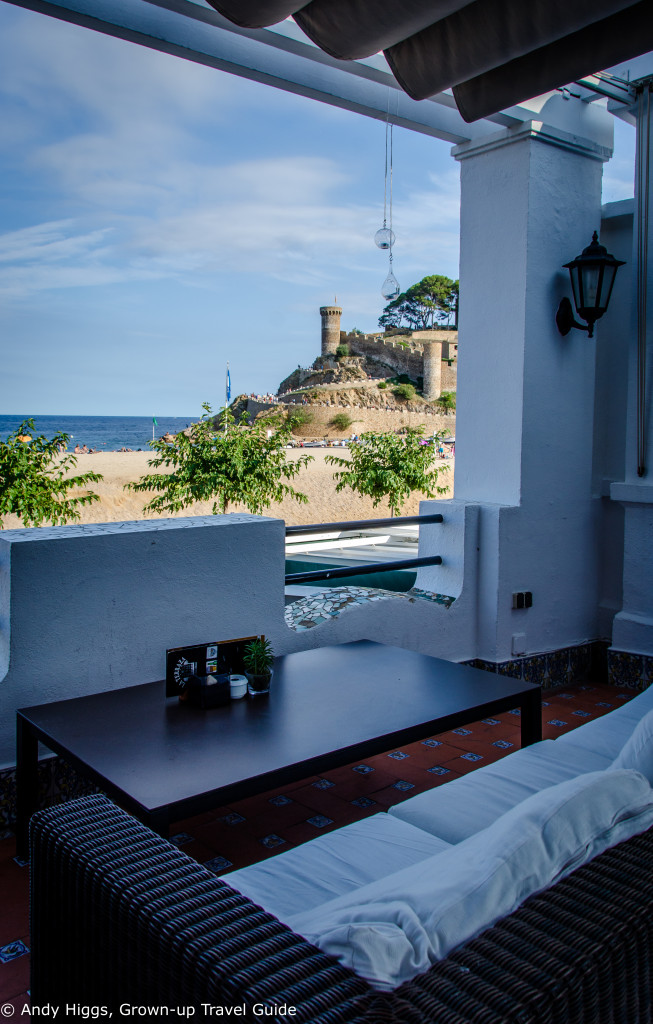 Sea views cost extra but are definitely worth it. 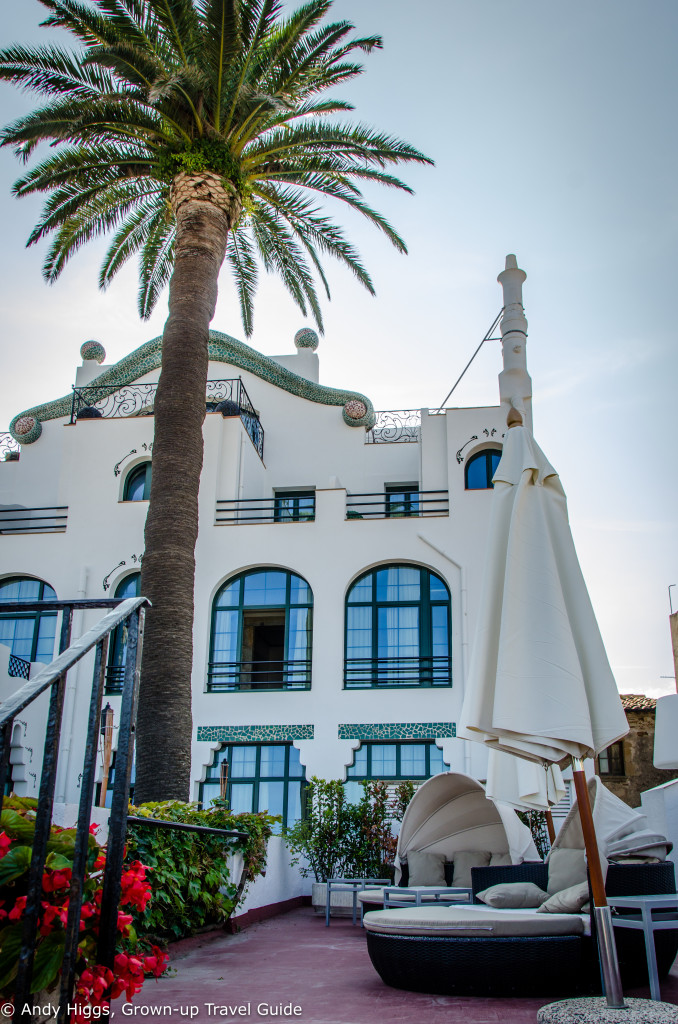 The decor is quite amazing and everywhere you look you’ll discover some incredible artwork. You may not be surprised to learn that the mansion was built by a disciple and colleague of Antoni Gaudi. 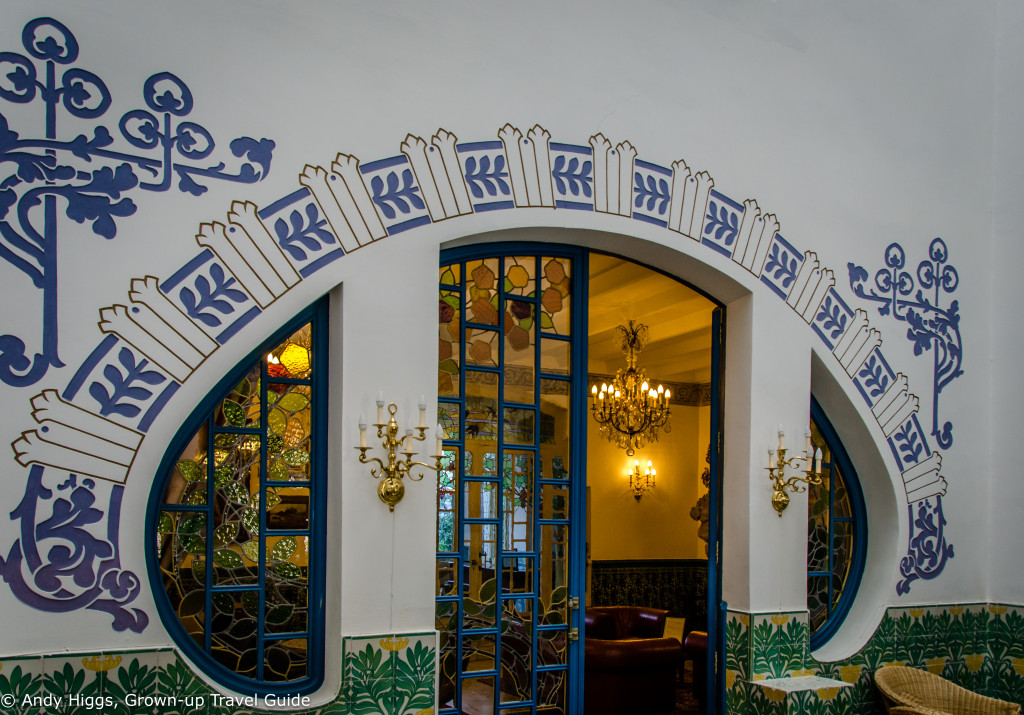 The amount of labour that went into the interior reflects the wealth of its original owners. 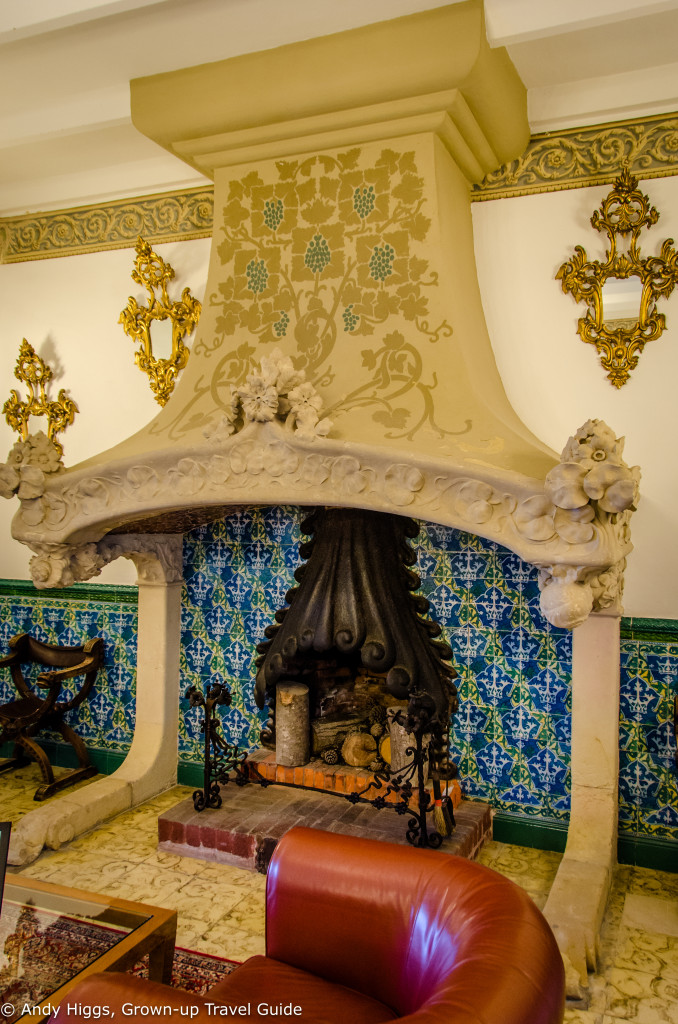 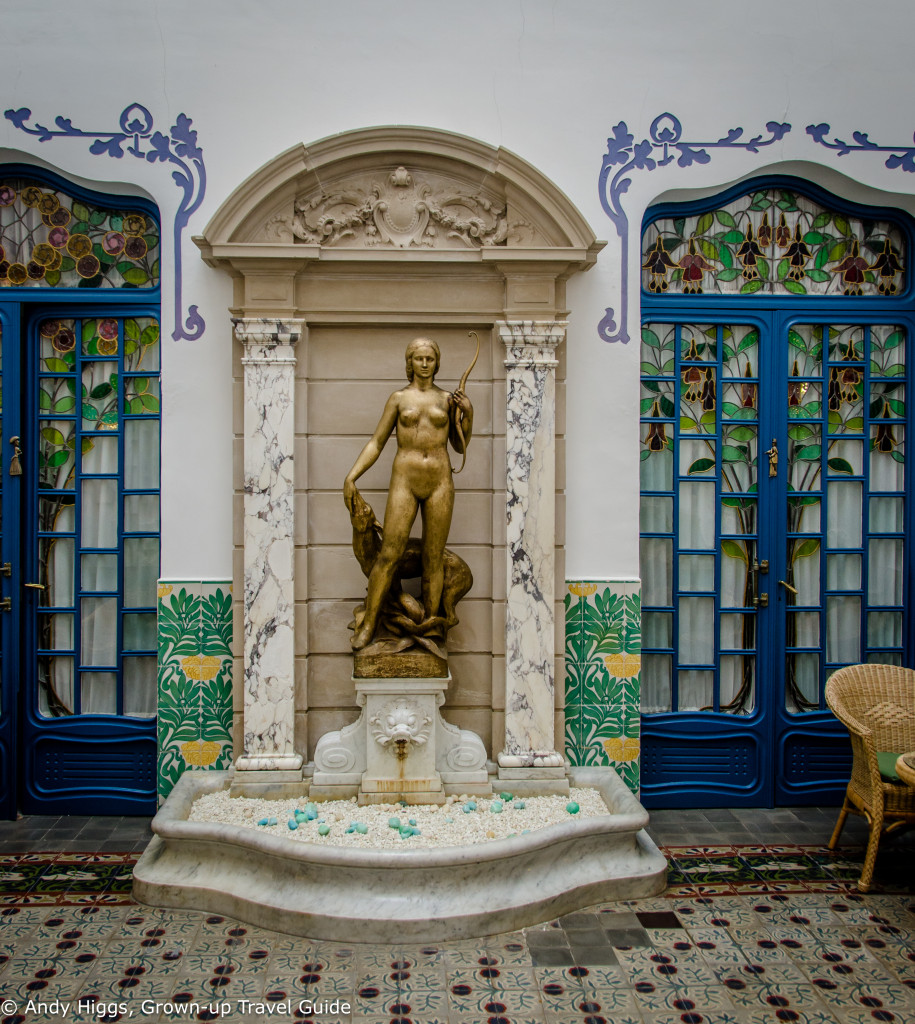 I think you’ll agree, this is not a place you’ll easily forget.

2 Responses to “Pearls of the Costa Brava – Tossa de Mar”