Briefly heading north again to try a bratwurst in pyjamas

Once again we kick things off with information and disclaimers: If you’re late to the party, read the introduction and itinerary, the article covering Part One of the Wurst Adventure which we spent in Berlin, the one covering Part Two in Weimar the one on Erfurt and the most recent post on Nuremberg

While you’re doing the background stuff, check out the Nordic Travel Bloggers collective and the official German Wurst Adventure website.

My trip was sponsored by the German National Tourist Office for the Nordic region, with help from Deutsche Bahn and Best Western Hotels and assure you that all opinions are my own, as they always are.

Back to the adventure…

We had an early start in Nuremburg to catch a couple of trains. Our route, which had been sending us southwest since Berlin, now took a strange detour back north to visit the Franconian city of Coburg. Somewhat forgotten during the Cold War when it was almost surrounded by the DDR, these days it has  reputation as a cultural destination with royal heritage.

We arrived at the station after an uneventful journey to be met by our guide Luisa, who drove us to our hotel for the night, the Best Western Blankenburg which was about ten minutes away.

Unfortunately it was both cold and raining for our arrival and neither condition changed during our time in Coburg, which somewhat limited our enjoyment. Neverthless we had a guided tour arranged with Luisa and after checking in, dumping our bags and having a short rest she collected us once more and delivered us to the tourist office in the city centre.

Now it may be a city, but it’s not a big one. With around 40,000 inhabitants, it’s a compact place with most of the main sights within easy walking distance. The logical place to kick off a tour is the Market Square, and we did the logical thing. Dominated by a large statue of Prince Albert of Saxe-Coburg (yes, that Prince Albert…about which more in a minute) and featuring a rather neat water feature that is probably a lot more fun to splash around in during the summer, this cobblestoned square is indeed the location of a market held twice a week.

One of the reasons for Coburg’s popularity with tourists is its royal connections. Prince Albert married Queen Victoria in 1840 and the rest is history. The statue was erected under orders of his wife after his death and she was present at its unveiling – which was her fifth time in Coburg. 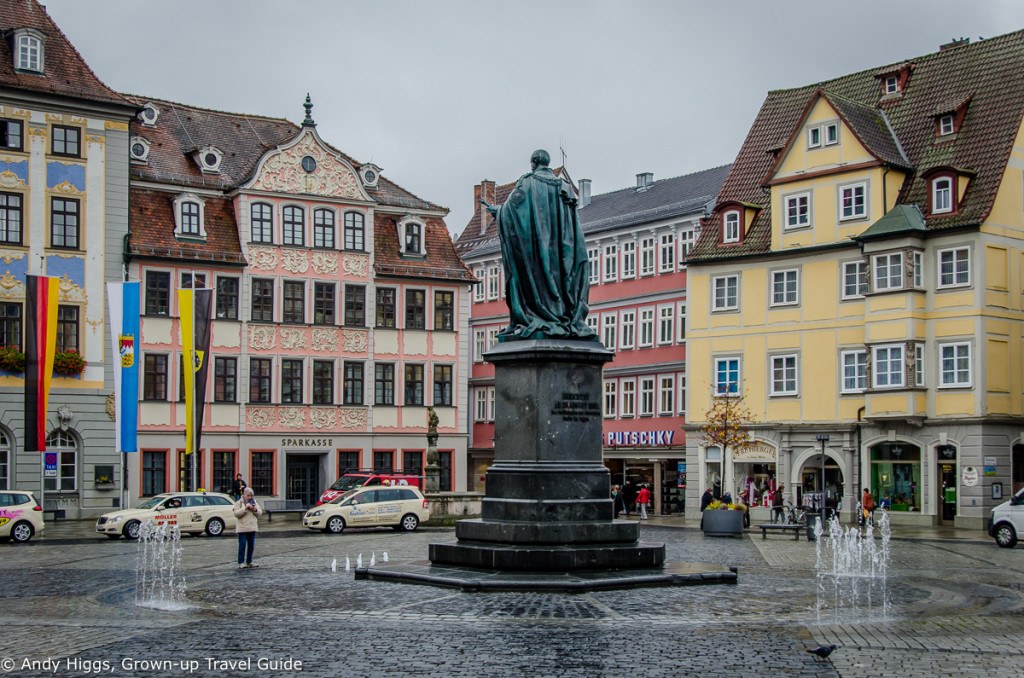 Now given the propensity for ‘inbreeding’ among European royal families, many countries can trace their heritage to Coburg and visitors come from all of them. Ready for the full story? Settle down and I’ll tell you…

Duke Francis Frederik Anthony and his wife Augusta Caroline Sophie somewhat cynically married off their daughter Juliane with a grandson of the Russian Empress Catherine II, thus achieving a royal connection and the power that goes with it. Juliane’s daughter Victoria married Prince Edward, Duke of Kent. They had one child, Victoria, who took the British throne in 1837.

She married the aforementioned Prince Albert – her cousin – and her children and grandchildren ruled over Germany, Greece, Great Britain and Ireland, Norway, Romania, Denmark, Sweden, Yugoslavia, Spain and the Tsar Dynasty in Russia.

The House of Windsor in the UK was originally the House of Saxe-Coburg but a German name was bad PR after World War I so they changed theirs. The town hall takes up most of one side of the Market Square and if you look closely you’ll see a figure holding what looks like a sausage. It’s actually a baton and a sign of his rank as a Roman legionary, but is now seen as the ideal length of a Coburg Bratwurst. On the subject of bratwurst, there is a stall here that is considered to serve Coburg’s best – as evidenced by the constant queue of customers during opening hours.

Naturally, this was our next stop… Coburg Bratwursts are indeed huge – at least compared to the ones in Nuremburg – and very tasty too. Mustard is the only real accompaniment permitted here. The rolls are cut across the top, which is a Coburg thing. Also the wurst are grilled over pine cones which adds a distinct flavour.

We loved the sausage but I don’t think it was quite up there with our favourite in Nuremberg. Excellent, nevertheless and an essential treat when in town. The city has been well restored and the buildings in the centre are ornately decorated. We wandered down one of the streets adjoining the square to see more. 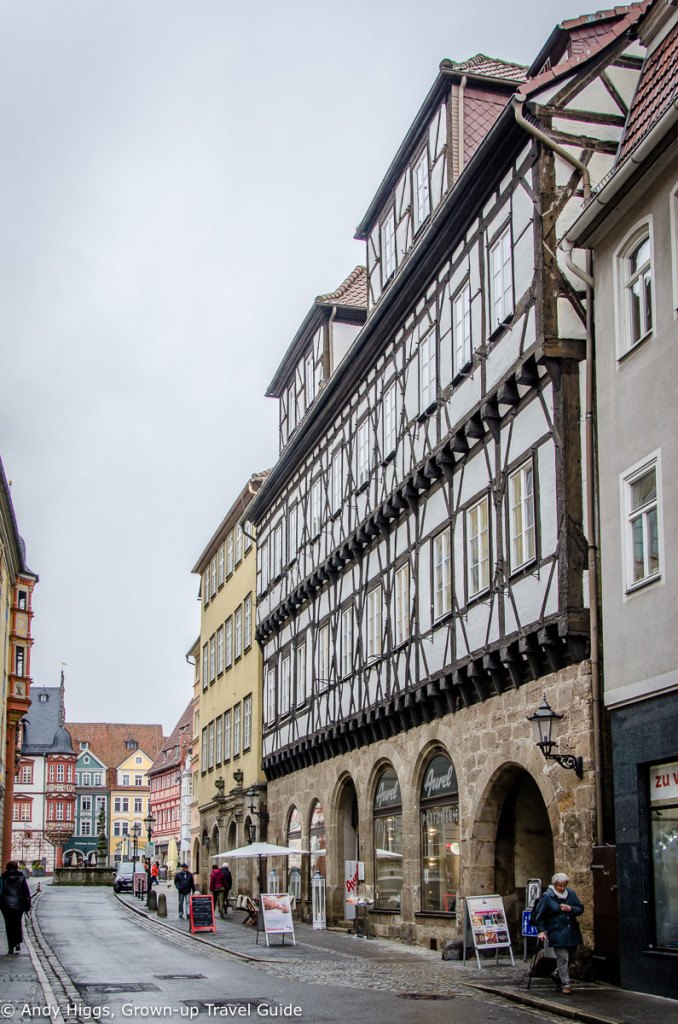 This half-timber house is both beautiful and historic. As the plaque says, it’s one of the oldest of its kind in Germany.

At this point the cold had become a little too much so we snuck into a cafe for a coffee and to warm up.

We also got to try a sweet delight loved by locals and visitors alike. 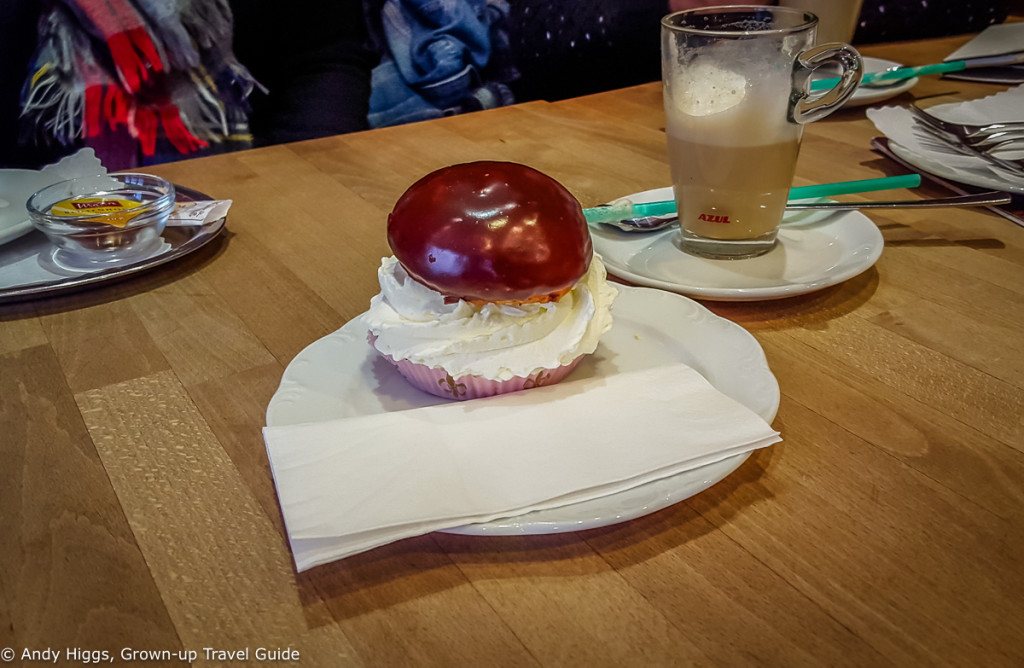 This is known as a Mohrenkopf and is actually not quite as supersweet as it looks. But it’s still sweet and very tasty, of course.

The weather was unrelenting and our time was up anyway, so we returned to the hotel for a rest before the next item on the agenda – “bratwurst in pyjamas”.

No, this is not the German version of a popular children’s TV series but rather a clever and practical development on the ‘sausage in a bun’ formula to enable folk to eat their usual snack on the go or in the car (or both) a little more easily.

The cafe and bakery we visited – Cafe Feiler – is a family-owned business with several bakeries in the Coburg area. They do not claim to have invented this particular take on the Coburg sausage but have been making them for years and are one of the most famous ‘brands’ in the city.

I should probably point out that the standard translation for this creation is in fact “bratwurst in a dressing gown” but since both our guide and the guy making it favoured the pyjamas version – and it’s more fun – I am justified in using it.

Basically, the regular Coburg bratwurst is a little impractical to eat on the move with it’s oversized sausage sticking way out of a tiny roll. 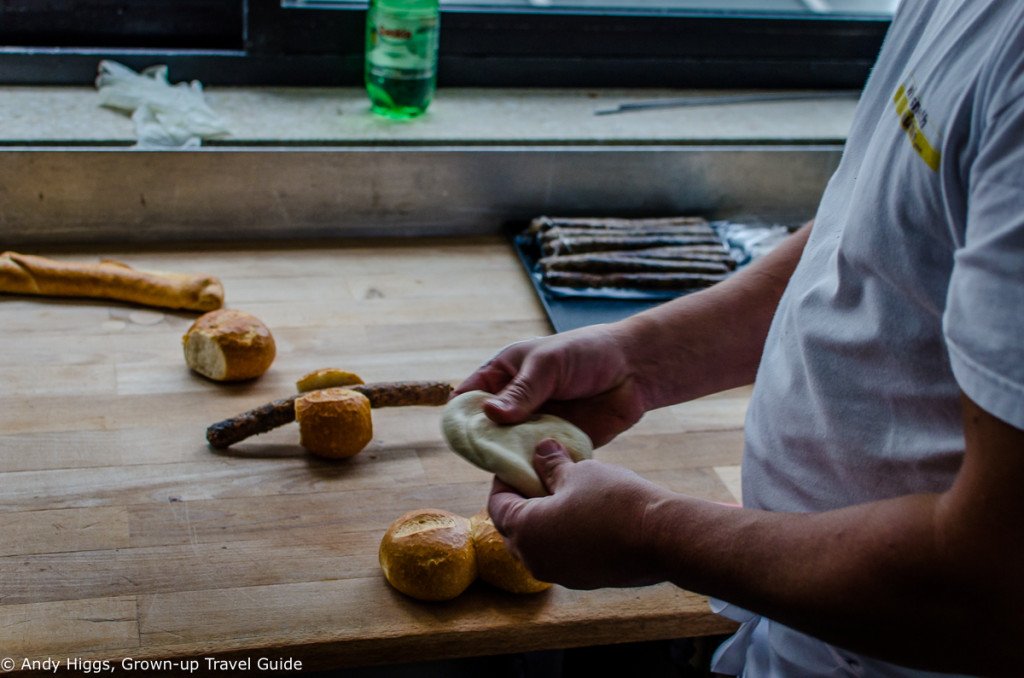 Some bright spark came up with the idea of using the same basic materials – the sausage and the dough – and making a takeaway version. 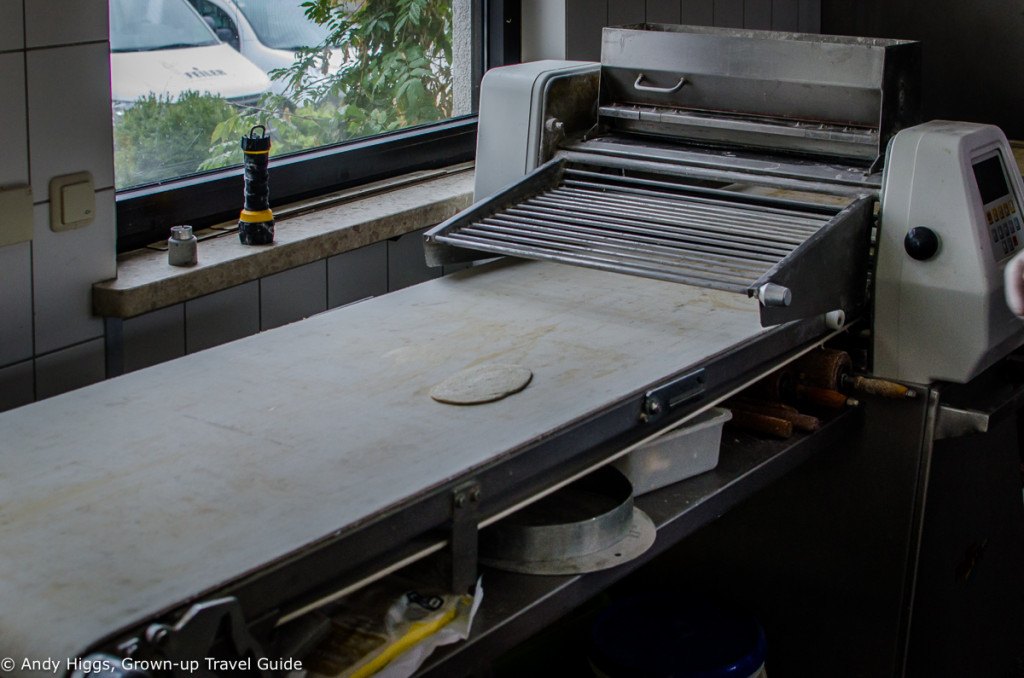 Simple but clever – take the same amount of dough used for the roll and run it through a pizza-style machine to flatten it. Sorry, not sure of the technical term for a machine that flattens dough… 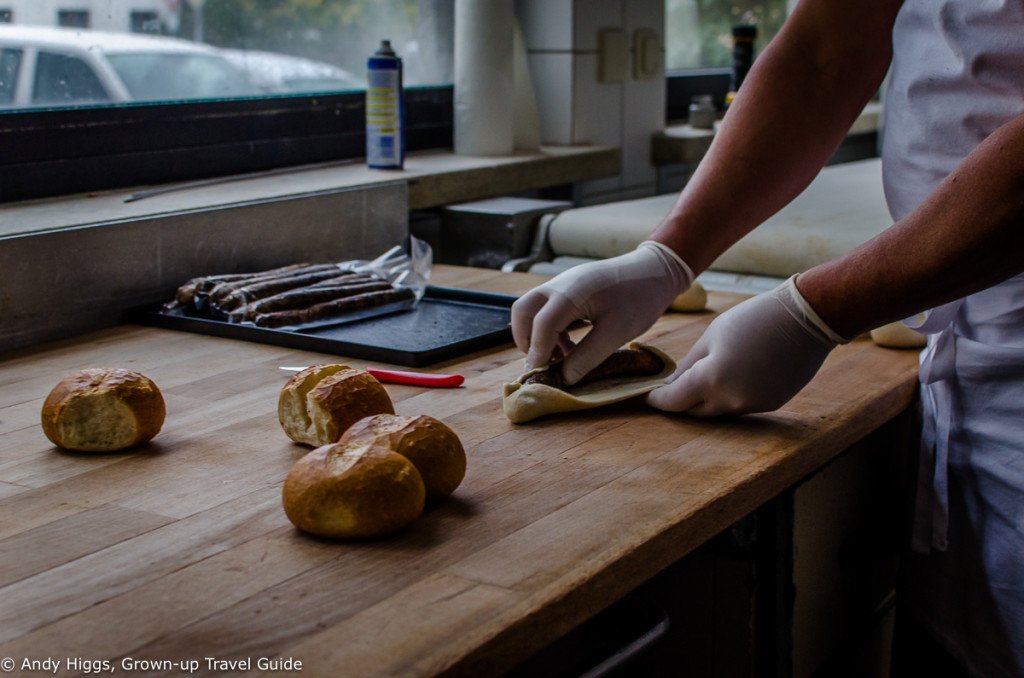 Then take a cooked sausage and roll it inside the dough.

Fold in the ends, stretch the dough around and close it all up. 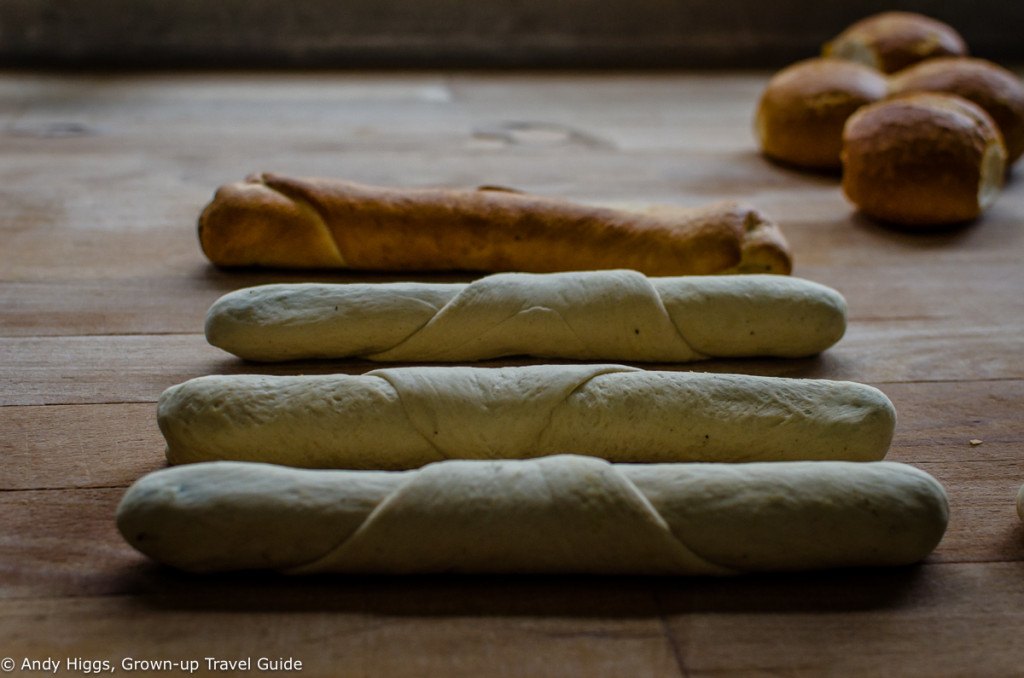 Then you are ready for baking. Pop it in the oven for about ten minutes until golden brown. Voila! Now you can stuff your face while in your car or walking back to work. The finished wurst were served in the adjoining cafe – with mustard of course. I loved this sausage – it was a more satisfying way to eat the Coburg bratwurst as well as a more practical one.

After polishing off ours we said our goodbyes and returned to the hotel before dinner.

We visited the actual bakery and cafe which is in a suburb of Coburg, but there is a more convenient branch in the centre of town:

It was still raining and miserable when we were picked up by Luisa to meet the manager of Coburg Tourist Board at his office. Luisa was then off the clock so she left us in his capable hands.

Here we discussed tourism, politics and the ways of the world over a huge plate of pork and dumplings – these were softer than the ones we had tried previously on this trip but equally tasty – especially accompanied by a lovely weissbier.

After dinner we walked back to the hotel in the rain and had a relatively early night.

If it hadn’t been for the weather I would have loved to have seen more of Coburg – it’s a beautiful place with a fascinating history and this area of northern Franconia is teeming with ultra-local beer breweries in the nearby villages, has a wonderful landscape for exploring on foot or by bicycle, some unique festivals (including, rather bizarrely, a salsa festival in the summer) and excellent food.

All in all this is another place that needs more time and one to which I will return.

Munich – and the finale of the Wurst Adventure – awaited in the morning. 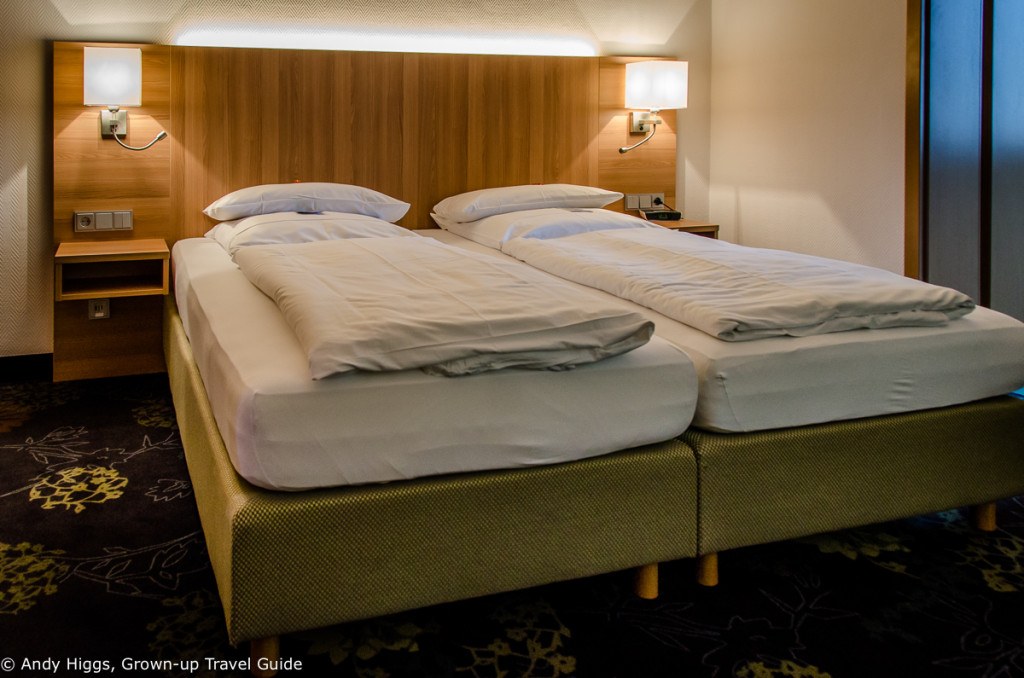 Located just outside the city centre, this hotel is an easy fifteen minutes walk from the station and slightly less from the Market Square. If you have luggage you’ll want to take a taxi which won’t cost you more than a few Euros. The room was very cosy with a superb bed – or rather beds; again there were two singles pushed together.

It was also extremely quiet – set back from a road without much traffic in any case. 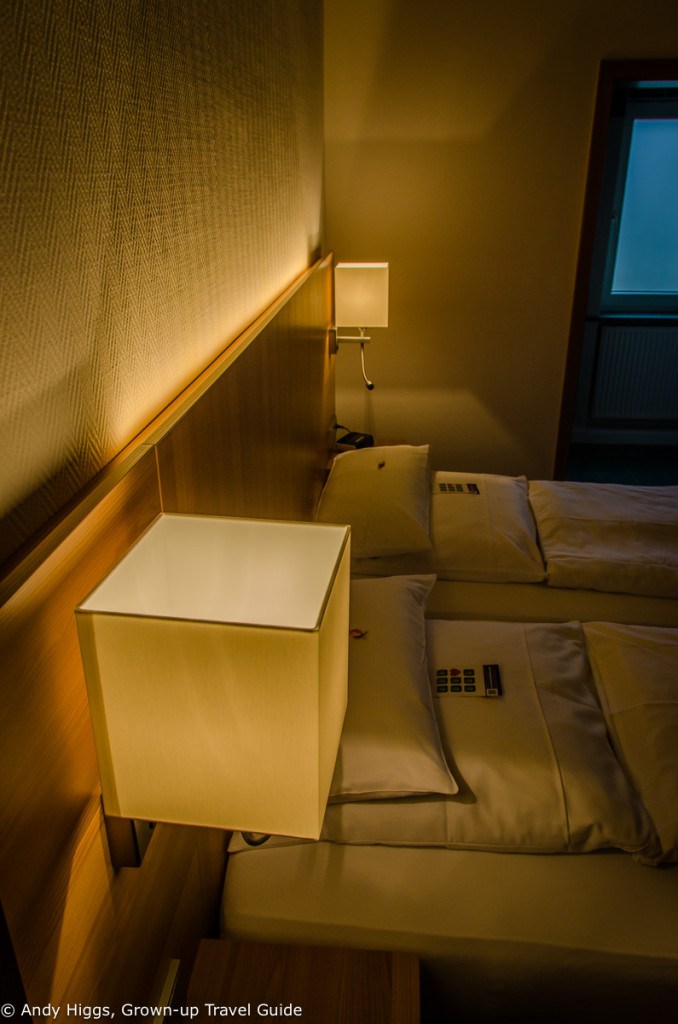 I liked the lighting, too – bright enough to see what you are doing but subtle enough to maintain a relaxed atmosphere. There was a good amount of space in the room too. 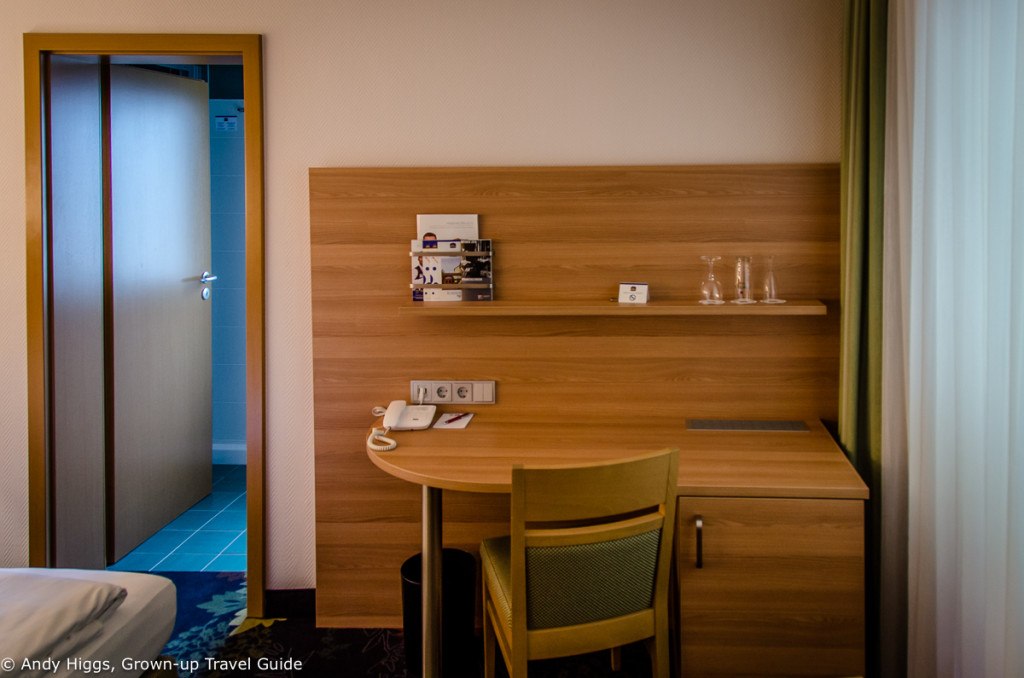 Yes, there were carpets but they were in excellent condition. The desk was a good size with sensibly located power points if you need to work. There was a reasonable amount of storage space although probably better suited for a single occupant rather than a couple. 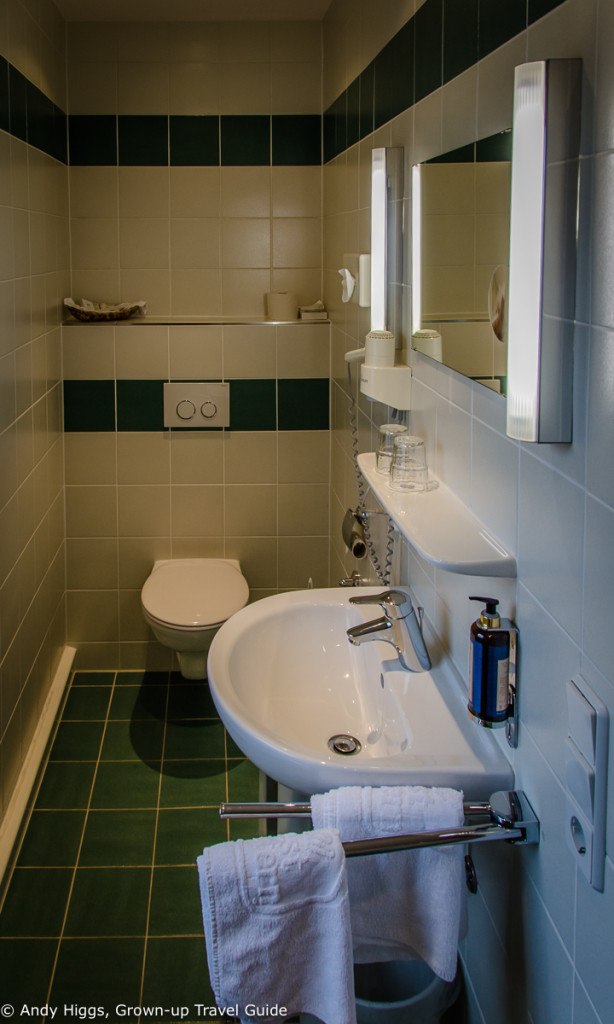 The bathroom was a good size and very modern. 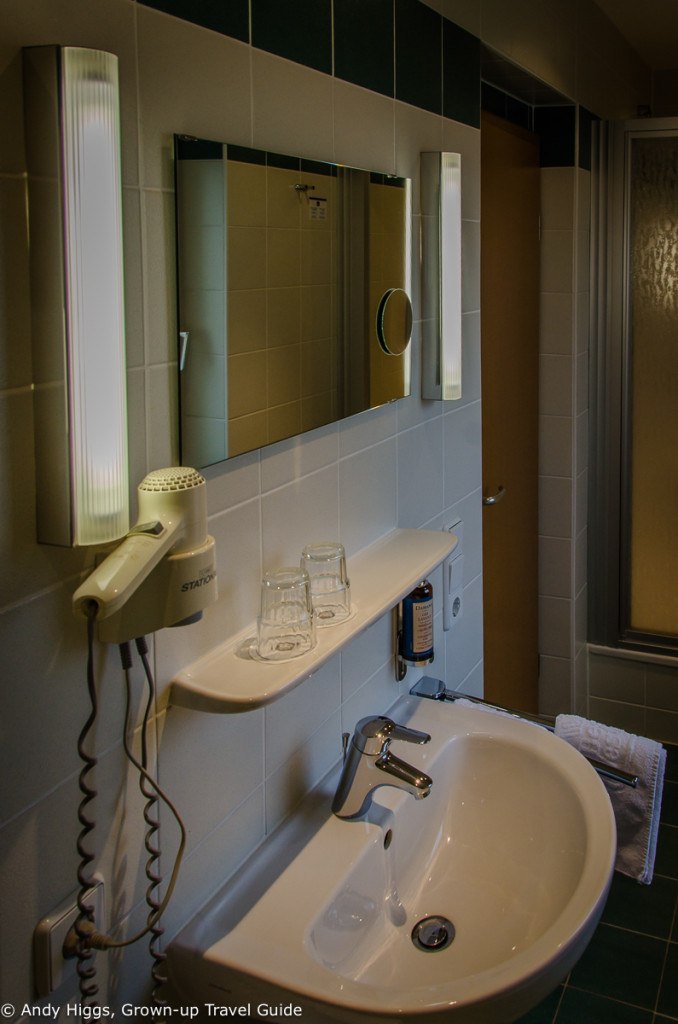 Again, plus points for the soap dispenser rather than individual bars. And yes, Best Western managed to complete their run of having fantastic showers in every hotel we stayed in (in Munich we were booked in a different hotel as BW had no availability.)

Again, breakfast was very good – lots of variety and some local products. I tried both hot and cold dishes and the quality was excellent.

There are slightly more central places to stay in Coburg but the Best Western is an excellent option if you don’t mind the short walk. It is also very good value for money and comes highly recommended.

The winner: Coburg Bratwurst in pyjamas

Keep your eyes open for the final part of the Wurst Adventure, when we arrive in Munich 🙂