London is home to some of the finest iconic landmarks as well as some of the greatest modern architectural wonders in the world. Along with its museums, art galleries, shopping, dining and entertainment venues, it is among the most visited tourist attractions on the planet.

And if you want to get the most out of your trip to London, it is recommended to stay at a hotel in or near the centre of the city.

Whilst in the UK, it is worth noting that there are many bargains in terms of shopping, both on and offline. For example, if you like to vape, you can buy e-liquid here.

Once you are done with sightseeing and want an alternate view of the city, try something different by visiting spots that offer incredible aerial views of the city. There are quite a few such locations in London and these include the following:

St Paul’s Cathedral: One of the most recognised symbols of the city St. Paul’s Cathedral is also one of the most visited attractions in the city. One of the highlights is the Oculus 270 degree film experience that is hosted in the Crypt, which brings alive the 1400 years history of the cathedral. Then there is its famous Whispering Gallery that is a one of-a-kind acoustic wonder to visit.

You will have to climb 257 steps to get up to the Whispering Gallery. To experience great views of London and its landmarks, you need to be prepared to climb another 119 steps to reach the Stone Gallery. And for the ultimate view of the city skyline you need to ascend to the Golden Gallery that offers the most exhilarating panoramic view of London’s skyline.

The O2: One of the most famous musical arenas in the city, The O2 plays host to some of the biggest musical concerts and events in London. And one of the top attractions at the venue is its fabulous skywalk that is over the top of the arena. Visitors have to don a special climbing suit with harnesses and are given safety instructions, before they set off to get to the platform that is located 53 metres above the ground level.

Visitors have to ascend up a fabric walkway to get to the summit. It is very windy albeit a thrilling experience with amazing views of Canary Wharf, the Tower Bridge and other prominent attractions. Visitors are able to walk about freely and look around in all directions before they have to get harnessed to begin their steep climb down back to base.

The Monument: It was completed in 1677 and was built my master architect, Sir Christopher Wren. It was built to commemorate the Great Fire of London in 1666, as a symbol of regeneration and rebuilding of the city. The Monument stands 61 metres in height and is a Roman type Doric column that is located in the centre of the City of London.

It is close to the spot where the fire is alleged to have been started and there is a spiral staircase that allows visitors to gain access to its platform at the top. To ascend to the viewing platform you need to traverse up its 311 steps. At the top there is a gilded orb that is enclosed to ensure visitors are safe. It offers excellent aerial views of the city and its skyline.

And those who manage to scale its steps to reach the platform at the summit are awarded a certificate for their efforts. A nice little souvenir to keep of your visit to the monument! 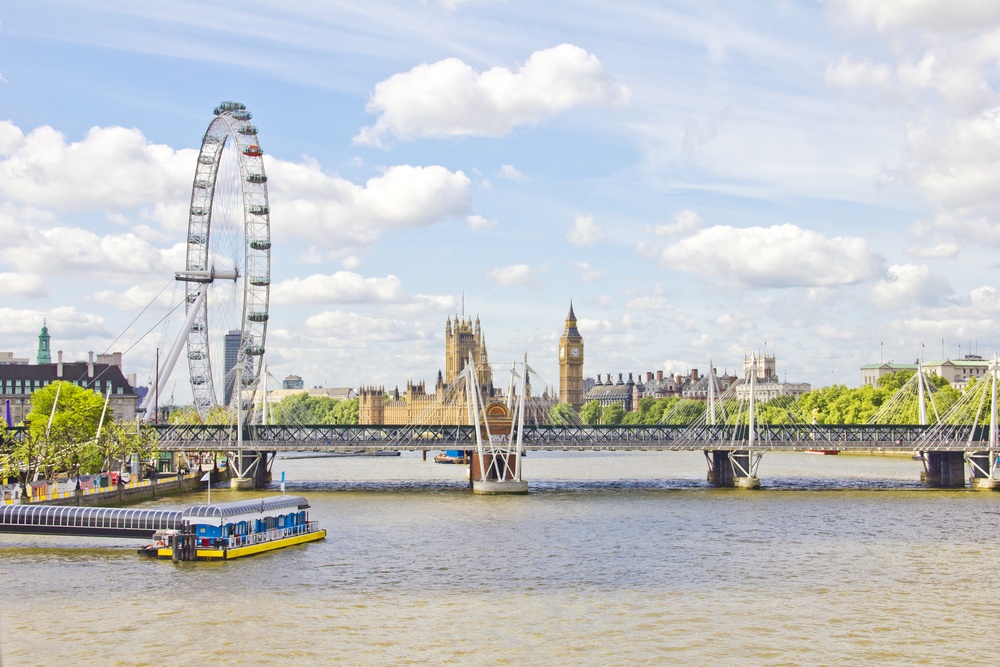 The London Eye: At a majestic 135 feet the Coca Cola London Eye located on the South Bank of the Thames River, is a great spot for some of the best views of the city. You could board any of its 32 capsules which spin gingerly and take around half-an hour to complete one single revolution. On a clear bright day you can see a distance of as far as 25 miles away.

From the glass capsules you can catch sight of some of the most famous landmarks in the city like Buckingham Palace, St. Paul’s Cathedral, Big Ben, The Houses of Parliament etc. It also offers spectacular views of the Thames River and its surroundings.

To make the experience more memorable you could choose to travel in style in one of its pricey private capsules that serve champagne to its guests. And the entry ticket also offers an exciting 4D cinematic experience that is simply stunning!

Arcelor-Mittal Orbit: This is one of the newer additions to the city skyline built in 2012, which is located atop the London Olympic Park. It is out of the tallest structures in the city and offers excellent views over the city and the Olympic Stadium. There is a special viewing platform built at its summit from which visitors can get glorious views across London.

Emirates Cable Car: This has the distinction of being the first of type cable car system in London as well as the country. And it forms part of the public transport network of the city. The cable car system helps to link the North Greenwich Area to the Royal Docks, while taking travellers across the Thames River that lies below.

The ride is short just about 1.1 km with a trip taking less than 10 minutes across. Along the way visitors get a fantastic aerial view of the Tower Bridge, The O2 Arena and other major attractions along the route.