Whether you have visited London before or you are a first-timer, when it comes to planning things to do there are usually some attractions which crop up repeatedly.  London is famed for its rich history, culture and heritage and we would certainly recommend making time to see some of the better-known attractions such as the Tower of London, Buckingham Palace, the London Eye, and plenty more besides.  However, for those people who like to inject a little bit of adrenaline into their day then there are also several ways in which you can do that in London.  The city might be a little short on theme parks but there are certainly other ways to get your kicks when exploring London: – There are several companies who offer helicopter tour rides over London and this makes a great and unique way to see the city as well as giving you a superb adrenaline rush.  You could book this as a gift for someone or just treat yourself but imagine seeing some of the city’s best landmarks from the skies?  Flight times range from between 12 minutes to 30 minutes and it’s a fantastic way to escape the crowds of tourists and see the city of London in an entirely new and different way.  This experience is a real must for anyone who wants a once in a lifetime feel to their thrill seeking.

There is something to be said for scaling one of the country’s most renowned landmarks and Up at the O2 gives you the opportunity to do just that.  This 90-minute experience will see you taken on a guided expedition, climbing the outside of the O2 arena along a fabric walkway until you reach the top, at 52 metres above ground level and with some truly envious views across London.  The walkway is suspended 2m above the surface of the O2 roof and has a slight bounce to it, just to keep you on your toes.  You don’t need any previous knowledge to take part in this experience; there will be a Climb Guide on hand to take you through all the safety and security before you climb and who will assist you as you make your way to the top.  Once you have climbed the 380m walkway you will be rewarded with the chance to stand on the observation platform and look out across the city; you might even be able to spot one of the Mayfair hotels London.  There are several different packages available including a Sunset Climb and a Twilight Climb. There’s only one way to travel along the River Thames for thrill seekers, and that is bouncing along in the back of a speedboat.  This is one of the newest experiences to arrive in London and gives visitors the opportunity to watch the landmarks and attractions which line the banks of the River Thames flash by at an almost unbelievable rate.  Ride times can last anywhere between 20 minutes to over an hour and it’s even possibly to privately hire the boat so it’s just you and your travelling party on board.

Although if you are staying at the Montcalm Hotel Marble Arch London you must travel for a little longer to reach the ArcelorMittal Orbit which is located in the Queen Elizabeth Olympic Park, we guarantee that for the true thrill seeker the journey will have been entirely worth it.  There are two ways in which the UK’s tallest sculpture can contribute to that all important rush of adrenaline.  The first is with the slide; which is the world’s highest and longest tunnel slide, being 178 metres in length.  It takes just 40 seconds to get from the top of the ArcelorMittal Orbit to the bottom but in that time, visitors will have circled around the structure 12 times, through loops and curves including a rather tight corkscrew section known as the ‘bettfeder’ before hitting a 50m straight run which brings you back out into the open. The second opportunity provided by the ArcelorMittal Orbit is through a company called Wire and Sky who offer the chance for visitors to abseil down the outside of this famous structure.  As it stands 262 feet above city level, this is certainly not one for the faint of heart!  Trained instructors will take you through a safety briefing and provide the necessary equipment before leading you to the upper viewing platform.  From here you will begin your exhilarating descent back to the ground, with the chance to see some truly stunning views across the city as you do so.  Landmarks such as The Gherkin, St Paul’s Cathedral and Canary Wharf are all visible from the ArcelorMittal Orbit on a clear day. 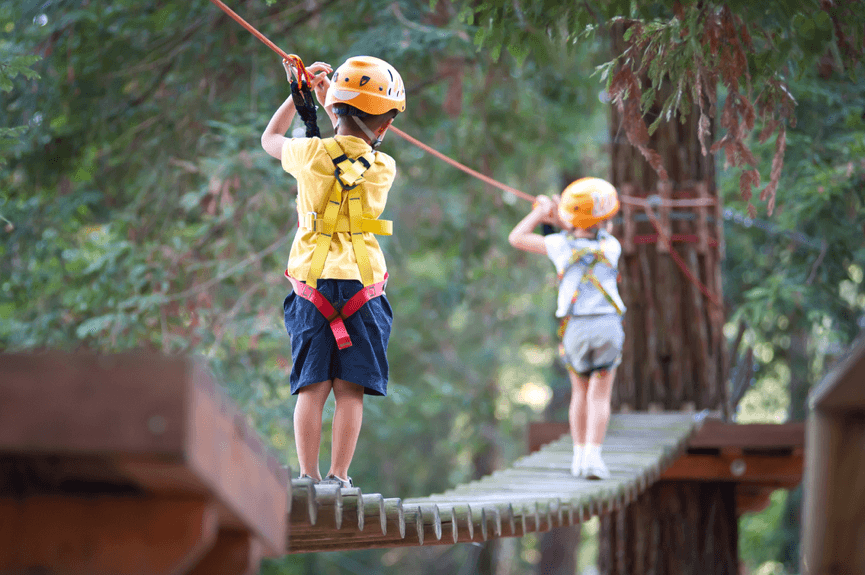 A new urban adventure from Go Ape has arrived in London and is taking the city by storm.  Go Ape usually creates its treetop adventure courses in the middle of forests and wilderness but they have now brought their experience to the heart of the city in their newest location.  Situated on the south bank of the River Thames, this courses has crossings which stand almost twice as high as some of the other Go Ape adventures, and twice as long making them extra challenging.  It takes between 2-3 hours to complete the course and participants must be aged 10 or older and accompanied by an adult where necessary.  There is also a Treetop Junior adventure course for younger thrill seekers who aren’t quite old enough to take on the highest course.  In addition, there are also two other Go Ape locations near to London: Trent Park being close to North London and Chessington being outside of the city but still close by.