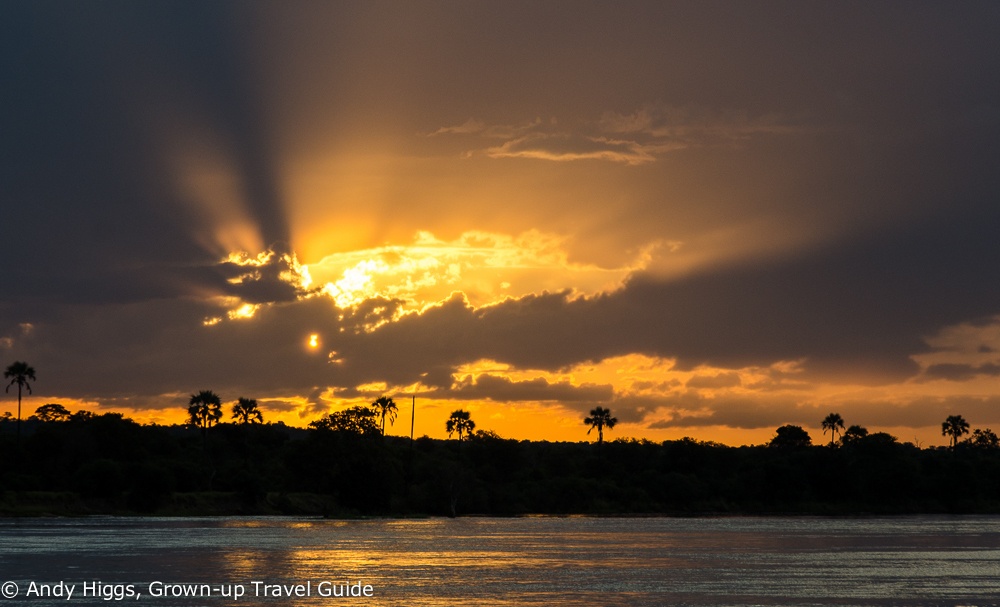 Since I am currently in Botswana and off the grid for a few days (no wi-fi, no mobile phone signal – what bliss!) it seemed appropriate to republish a few articles from my last trip to the most exciting continent in the world. Last year I experienced Zimbabwe for the first time – and I thoroughly recommend you do the same…

Pulling on my harness for the next part of the tour, I was a little taken aback when Monsieur Georges Imbault himself came over to help me adjust the straps. No longer in his role as the French engineer, our host was now preparing to lead us across the catwalk underneath the bridge and was clearly an expert in safety too.

Look closely at the picture of the Victoria Falls Bridge above which was taken from the other side of the gorge later in the day (the Zimbabwean side). Just under the roadway, running the length of the bridge is a narrow catwalk. This is the original access route used in the construction and maintenance of the structure – and if you sign up for the tour you get to walk it…

Some people actually find this more of a challenge than the zip line or even a bungee jump and I do understand that anyone who has a problem with heights might struggle. Rest assured that safety is again paramount and each of us had two lines on our harness fitted with carabiners which we would use to attach to the safety wire running the length of the bridge walkway.

We were instructed to keep at least one of these attached to the wire at all times, unclipping the other as necessary to move round obstructions. It was the same system I had used after the bridge slide and at climbing parks in Europe and each line is extremely strong.

This clip will show you what to expect:

As you can see the walkway is made of metal mesh so you get a great view straight down – but this may not be everyone’s cup of tea. Indeed two of our group had their doubts which proved to be founded when half way across, but to the guide’s credit he talked them though and nobody had to turn back.

One of them cried most of the way but I think she was glad she didn’t give up. I found it an amazing experience and an excellent way to fully understand just how incredible the Bridge design is – especially considering it was built in 1905! 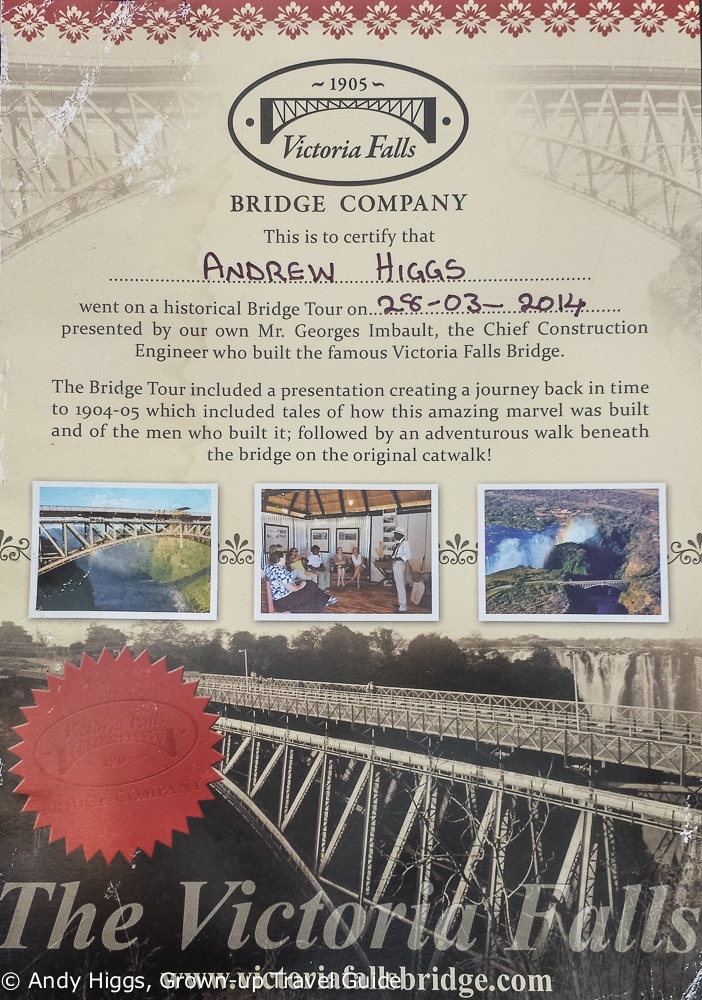 After completing the walk we received a certificate and it was time to bid goodbye to our genial host and get back on board the tram for the journey back to Zimbabwe.

Another round of cold drinks were most welcome as our driver fired up the engine and we headed back to the border post. I left the tram shortly after at the entrance to the National Park as the next item on my agenda was to see the Falls from the ground.

To get up close and personal with one of the Seven Natural Wonders of the World, head here. The views from the Zimbabwean side are better and the park is very well maintained despite all the problems in the country and the huge number of visitors. As well as the sight of the Falls there is a unique rainforest environment here due to the consistently damp microclimate, with a wealth of flora and fauna which have adapted to it.

A looping route leads from the entrance and visitor’s centre to the first of 16 viewpoints from which you can see – and hear – the Victoria Falls. 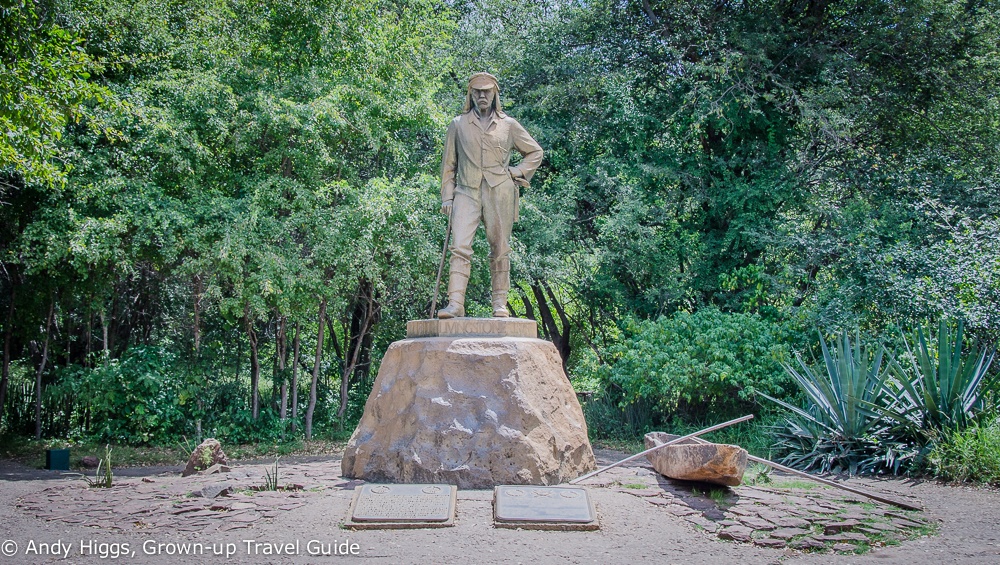 Perhaps the best place to start is at Livingstone’s statue where you can try to imagine what went through his mind here in 1855.

Having done so, I was soon making my way down the slippery steps to gaze upon the Devil’s Cataract in all its thunderous glory – and realising that this is but one section of the Falls themselves.

I put together a video from the footage I shot during my time in the park which you can see here:

Filming and taking photographs is not easy due to the spray which gets heavier as you move eastwards. I seriously regretted not having brought a waterproof jacket – especially a little later when what I assumed was just increasing mist turned out to be the mother of all tropical storms. Being in an open area devoid of shelter and at the furthest possible point from the cafe or visitors centre, there was little I could do about it and I was soaked to the skin.

By the time I made it to the cafe I was able to literally empty about half a litre of water from each of my boots and to wring a similar quantity from my shirt and trousers. The skies cleared a few minutes later and my clothes dried quickly, but my feet were squelching for the rest of the night. Lesson learned.

The Rainforest Café is a good place to have lunch – or dry out – or both in my case. I found they had a decent menu, good coffee, cold beer and blankets for wet guests which ticked all the boxes as far as I was concerned. Nearby you can learn all about the Falls at the Interpretive Centre and a well-stocked souvenir shop.

Patience had made arrangements with the staff of the cafe so that I could tell the waitress when I was ready to be picked up and Shearwater would send a driver. In the end I met some people from the Lodge where I was staying who offered me a lift back and on arrival at the office Patience told me she already knew I was on my way – word travels fast in Victoria Falls.

With the weather now much improved I was picked up at 4pm to be taken to the next event – a sunset cruise on the Zambezi. Sipping a sundowner while watching the sun go down is something of a tradition in these parts, and who am I to question tradition?

Shearwater runs several vessels from a jetty about ten minutes’ drive from their office, as do a number of other companies, but the concept is basically the same. For your money you get a relaxing, two-hour cruise with complimentary drinks and snacks.

You’ll see wildlife and plenty of birds and be treated to a wonderful sunset, weather conditions permitting. 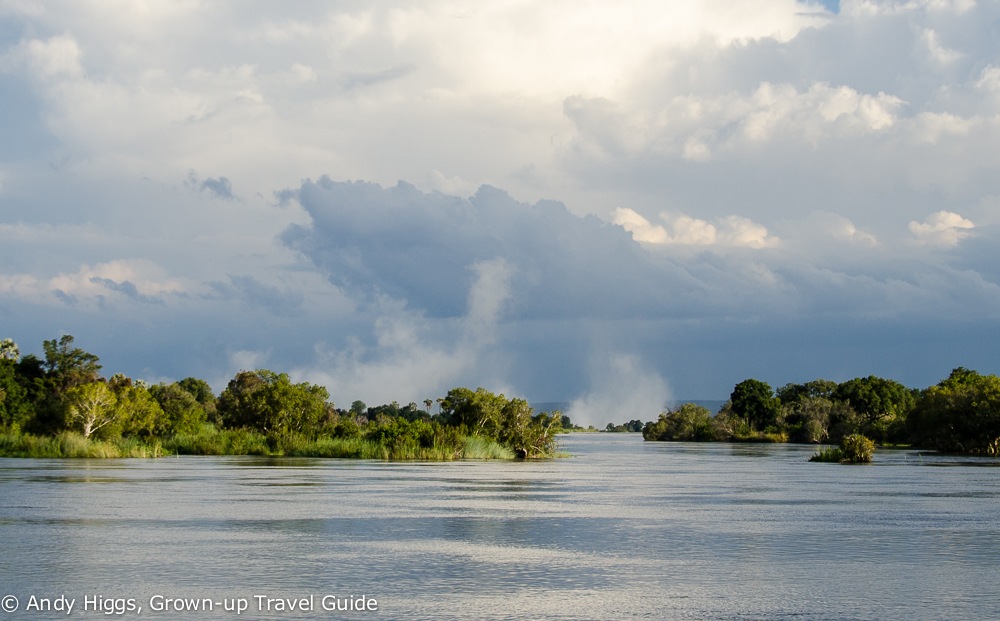 The two-deck boats sail downstream before reaching the point of no return with the mist from the Victoria Falls in the distance, before turning and travelling upstream until sundown. Roll the film!

If you prefer photos… 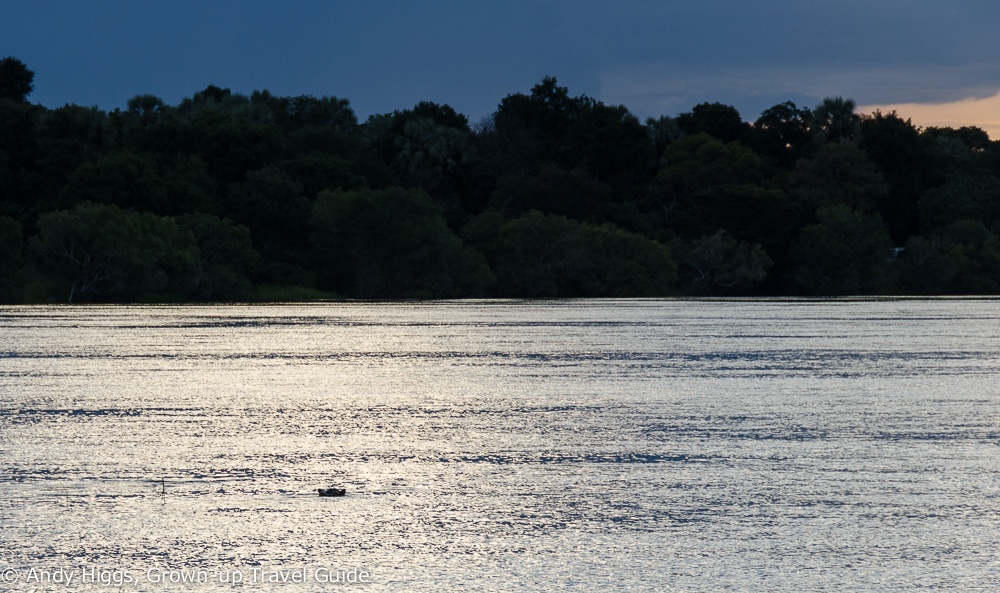 Hey – did you see something in the water? 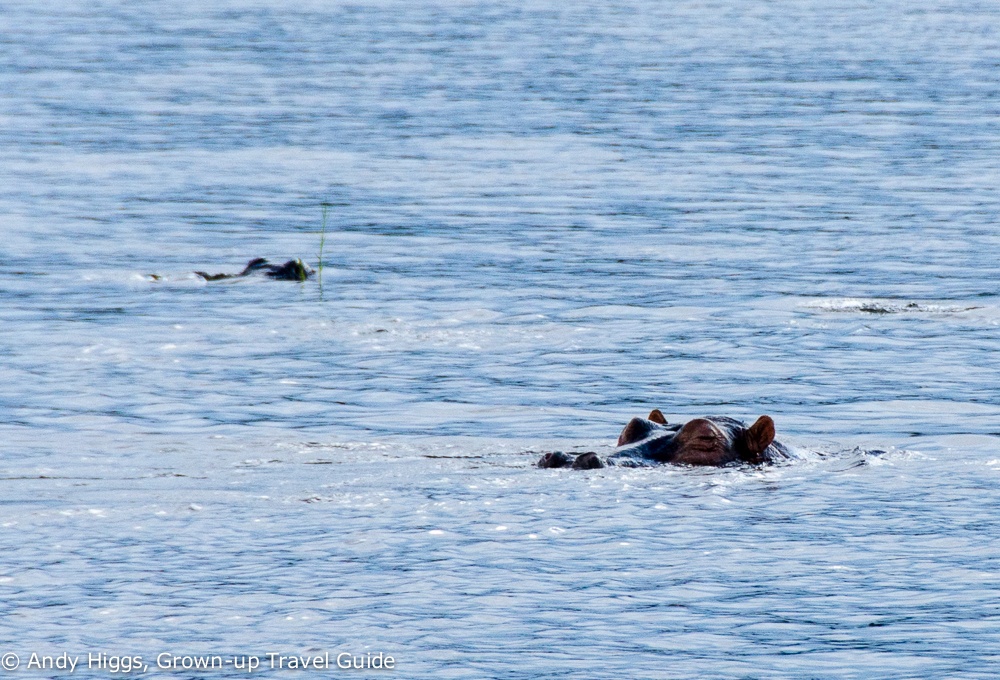 Aha! Hard to imagine how these big lugs can be so dangerous, but they are and kill hundreds of people each year. So a zoom lens is preferable to getting closer. 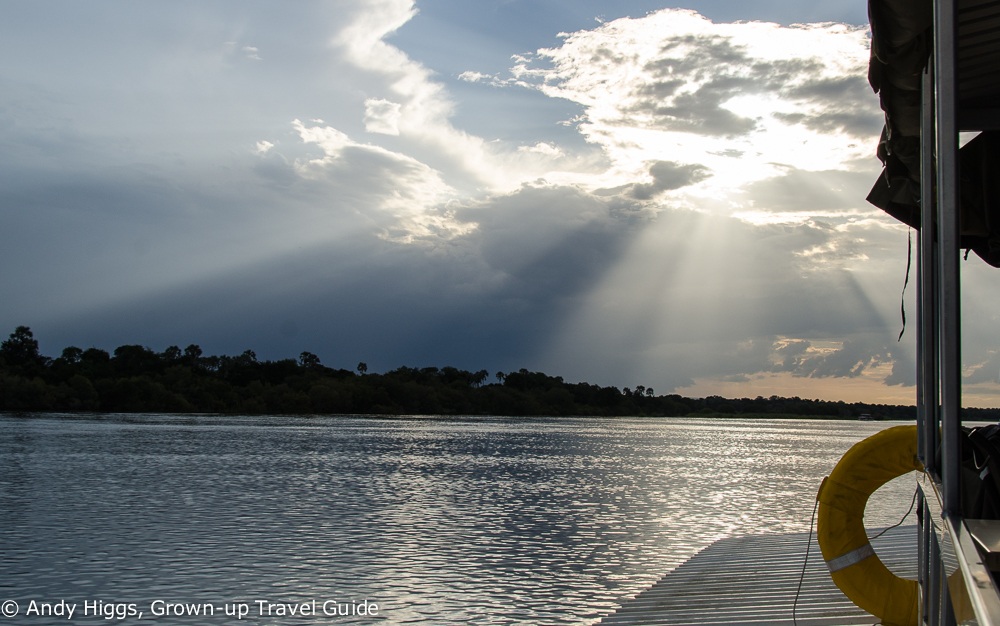 There you go. Picture-postcard stuff.

Just managing to avoid the coming storm we landed back where we started and boarded the waiting bus. This took passengers to various destinations and in my case to the final activity of the day – dinner!

Boma – The Place of Eating

I was pretty exhausted by this stage, but soon perked up when I got to Boma. It is a tourist trap, but it’s a good one. Offering a huge buffet with all sorts of grilled meat, vegetables, local specialities and desserts accompanied by cultural performances it’s great fun, but probably better enjoyed in company.

Very popular with large groups, it’s also good for families and couples but being on my own I felt a little out of place and also felt that the waiters saw me as a low value customer. I was also largely ignored by the wandering salesmen peddling everything from aphrodisiac drinks to fortune-telling services but did notice that they were not the persistent type and nobody was hassled during their meals.

This didn’t stop me enjoying myself though and the food was excellent and the wine most welcome. After choosing from a menu of starters I made several journeys to the various food sections (for research purposes, of course). My research included succulent warthog steak but did not encompass mopani worms.

The music and dance shows were great but I left before things really got going – later on there are drumming sessions where audience participation is encouraged and the opportunity to watch uncomfortable foreigners trying to dance. Not wanting to be one of the latter I called my driver from Gorges Lodge as arranged and made my getaway into the night. Lasting from dawn to dusk, and then a bit more, this had truly been one of the most exhilarating days of my life.