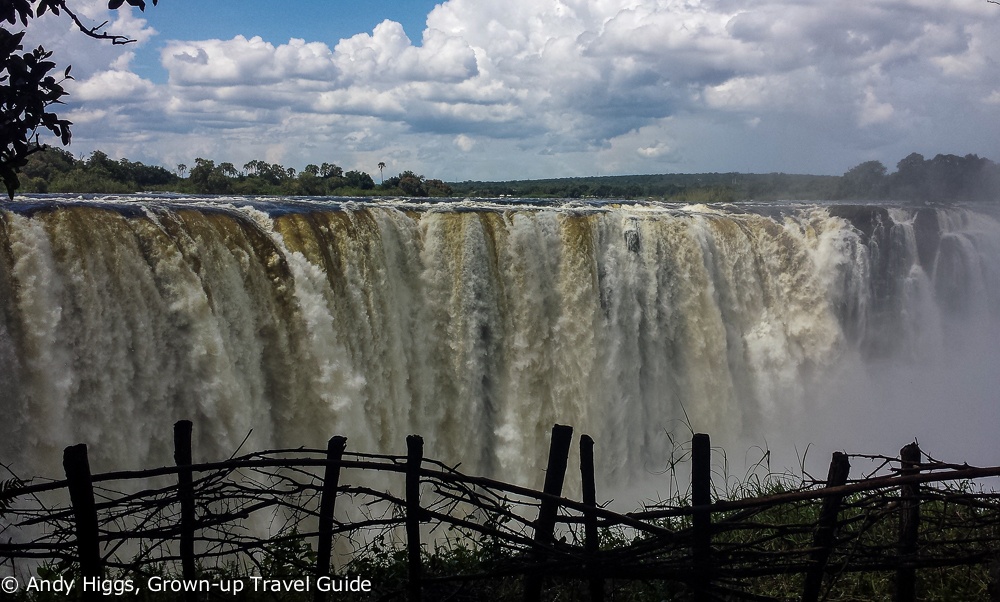 Last year I had one of the best trips of my life when I spent a week in Zimbabwe working with Imvelo Safari Lodges, a company that offers some of the best safari experiences you can have on the continent while helping both wildlife and the local community.

I also promised you more and am currently working on an extensive article about the wildlife conservation and community projects which Imvelo runs in the country and which set the benchmark for responsible tourism in my book.

With this in mind I decided it would be a good time to republish some of the Zimbabwe content for those of you who may have missed it the first time round. I’ll review the accommodation and experiences I had at two of Imvelo’s properties soon but first of all I wanted to show you just how much you can pack into a single day at Victoria Falls…

To avoid confusion let me make it clear from the start that Victoria Falls is a town as well as the natural phenomenon itself. 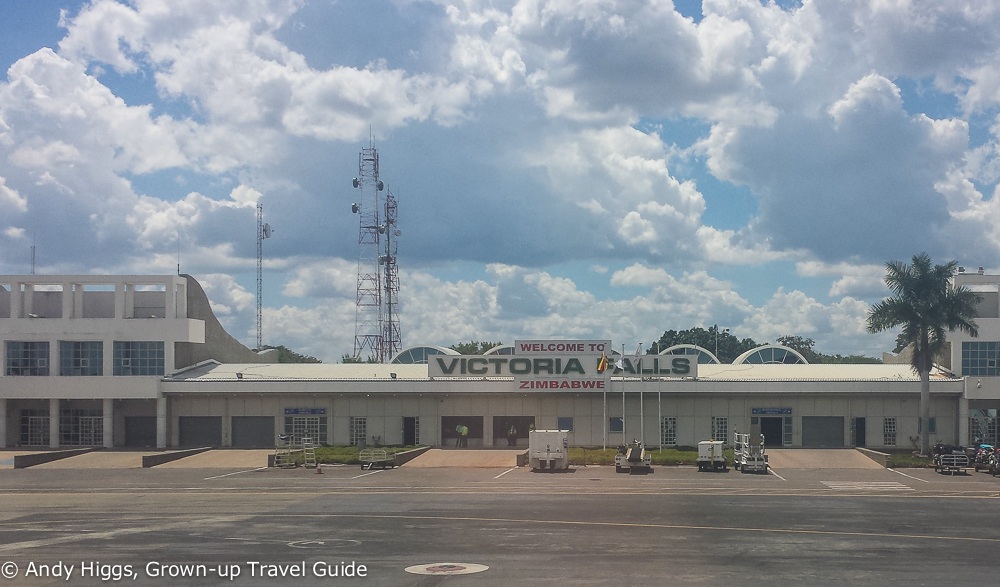 It’s on the Zimbabwean side of the bridge that forms the border crossing into Zambia and has an international airport making it a preferred point of entry for many visitors to Zimbabwe.

You can reach Hwange National Park in a few hours on a good road – which is where the majority of travellers are destined for – but don’t rush off without experiencing one of the natural wonders of the world – ‘Mosi-oa-Tunya’ (‘the smoke that thunders’). It doesn’t stop there either – the town of Victoria Falls is one of the most tourist-oriented in Zimbabwe with a number of operators offering activities ranging from relaxing sundowner cruises to bungee jumping.

Imvelo Safari Lodges recommended Shearwater Victoria Falls – the oldest operator on the Zimbabwean side and a company with a superb reputation. Shearwater were keen for me to experience their activities and review them honestly for my readers so we emailed back and forth to end up with a programme for the one full day I had in town. In the interest of disclosure I received a 50% discount on the standard prices but my opinions – as always on Grown-up Travel Guide – are my own.

While on the subject of prices, I have included the rate for each individual activity but Shearwater also offers a range of combo deals. You can book several products together at a major discount so check the Shearwater website; you may be surprised how much you can save.

I’ll write more about the fascinating history of the Falls, the town, bridge, hotel and all that great stuff in later articles; first of all I’m going to concentrate on the activities themselves. With so many photos, video clips and words I’ve had to divide this into three parts 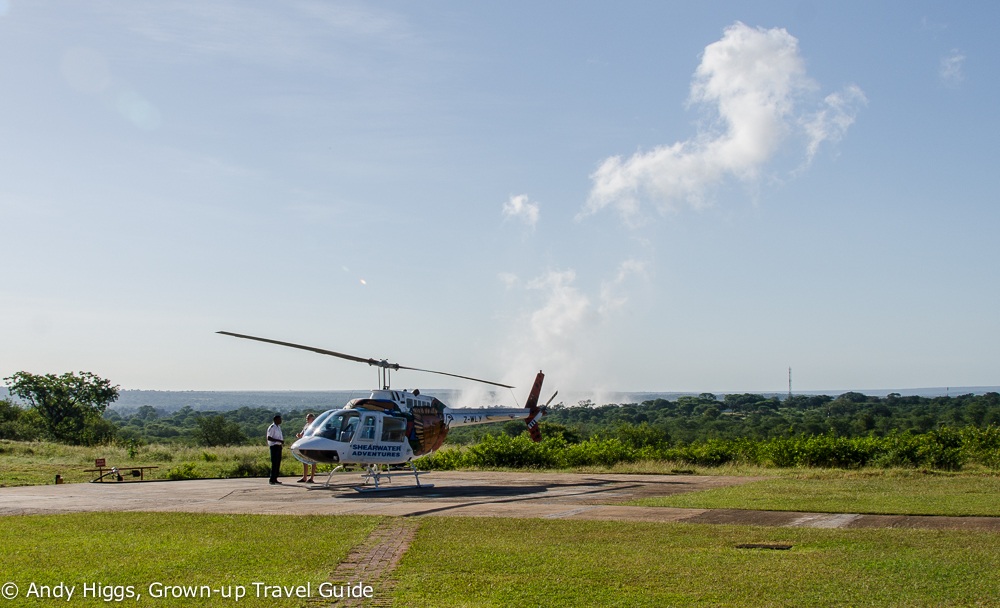 If you can, try to do this first. Nothing compares to seeing the Victoria Falls for the first time from the air. When I visited the water levels were extremely high due to exceptionally good – and late – rains, and the sheer amount of mist generated obscured the view from ground level. To really understand the scale of the falls – take to the air.

The name of this helicopter trip comes from the writings of David Livingstone. It’s hard to imagine the impact of seeing the Victoria Falls for the first time with no prior knowledge of their existence, but when he did so in 1855 he wrote that “scenes so lovely must have been gazed upon by angels in their flight”.  Now you can get an angel’s eye view of one of the natural wonders of the world…

In addition to the 13-minute “Flight of Angels” there is a 25-minute “Zambezi Spectacular” flight which covers a wider area, but you won’t feel shortchanged by the shorter version.

Shearwater owns the Zambezi Helicopter Company which is the largest private helicopter company in Zimbabwe and they will transport you to the departure point for your tour which is a few minutes from their town centre offices. I was lucky enough to get a place on the first helicopter tour of the day which was scheduled for 0830.

The flight was full which in our case meant 6 passengers plus the pilot – 5 in the back of the helicopter and one upfront. No matter where you sit you’ll have a great view, and the route includes both left-hand and right-hand circuits over the Falls so passengers on both sides get equal treatment.

Our group was blessed with perfect weather conditions and after a short briefing it was time to get going – while nothing beats the real thing I filmed the ride on my GoPro so you can see why you can’t afford to miss out on this experience. You’ll see that about half way through the film the chopper swings over so that those of us on the right get a stunning view of the Falls too. It’s in full 1080P too, so turn on HD quality and enjoy!

After landing we were ushered into a viewing room to watch the souvenir DVD put together while we were in the air, comprising footage shot by their photographer when we arrived and cut together with images, video and facts about the Falls. There’s no pressure to accept the offer and after the screening you’ll be driven back to town.

I had an hour or so to kill before the next event on my schedule, the historic tram ride to the Bridge. Trish at Shearwater suggested I had a look at the legendary Victoria Falls hotel and as the tram leaves from the station right outside the building it was on my way.

Despite its popularity Victoria Falls town is a small and easy-going town – as a tourist you’ll attract a certain amount of attention from would-be guides and souvenir sellers but never feel intimidated or that your polite ‘no thank you’ is ignored. 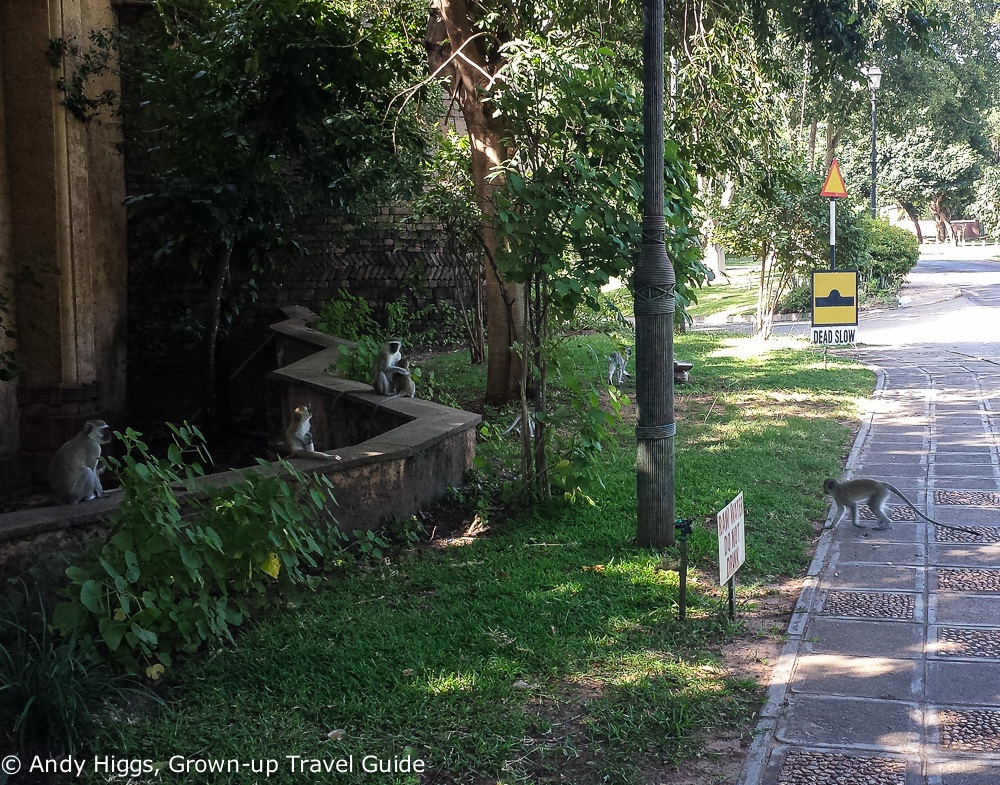 I had my first wildlife sighting during the walk to the hotel – first a family of warthogs crossed the road then a group of monkeys came the other way.

The Victoria Falls Hotel is an impressive example of colonial extravagance and and well worth visiting, the staff don’t mind if you look round and nobody tries to make you sit down and buy a drink in the bar. 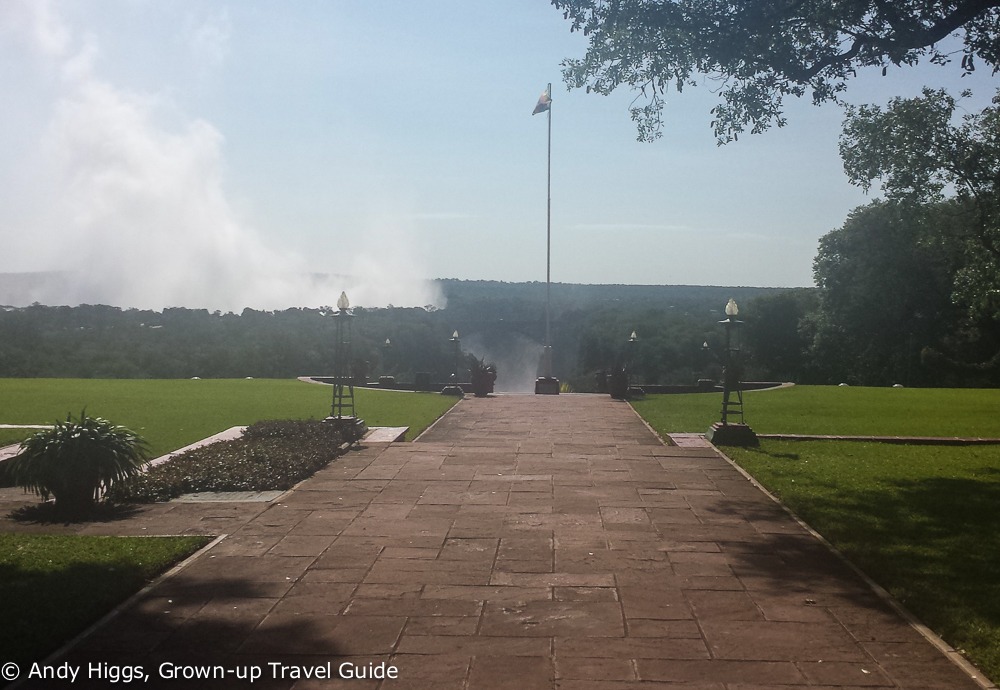 Of course you may be tempted into doing so to fully enjoy the beautiful view from the terrace.

The impeccably kept gardens and enviable location are two major draws but a lot of people find a visit to the bathrooms just as interesting if online discussions are anything to go by.

Unlike many other ‘grand hotels’ in Africa this one had kept up with developments and offers all the modern comforts you’d expect from a luxury property. Indeed the Victoria Falls Hotel remains one of Africa’s best hotels – just as it was over 100 years ago. Next time, I’m going to have to stay here but right now I have a tram to catch…

A short distance from the hotel a red carpet lead to the platform of the Victoria Falls Station. Upon arrival I met up with Patience, a Shearwater representative who would be joining me for the tour as well as the other passengers. 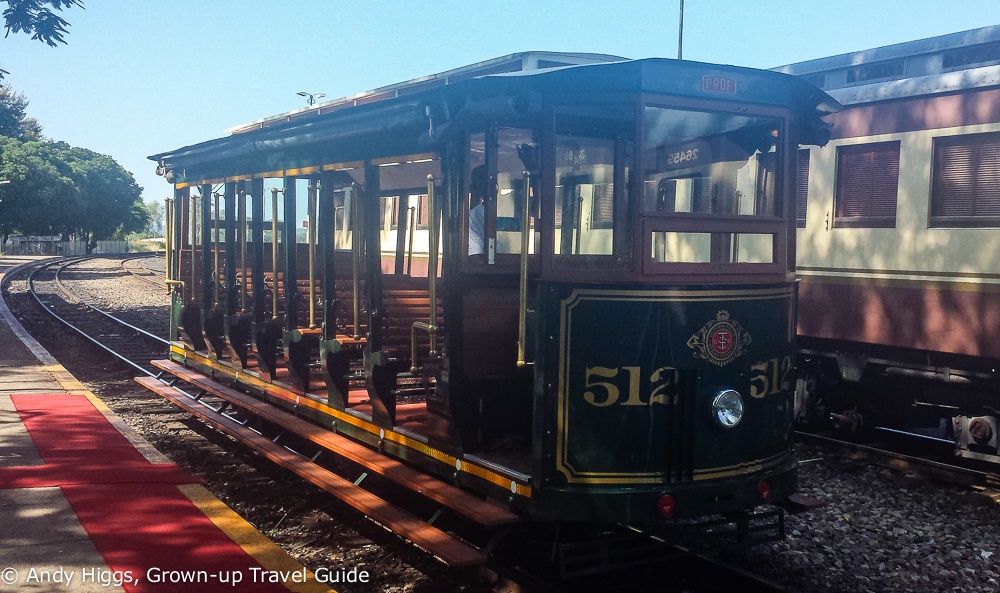 After a refreshing drink the tram came to pick us up. A new vehicle modelled on the 19th century design, this is an open-sided diesel tram with eight rows of bench seats. Our driver and guide took their places and a waiter offered us further refreshments for the 20-minute journey to the Victoria Falls Bridge.

After leaving the station and crossing the main road in town we were soon into the bush and right away we spotted several Impala watching us.

The driver stopped to allow us to observe and take photographs before we slowly pulled away again. 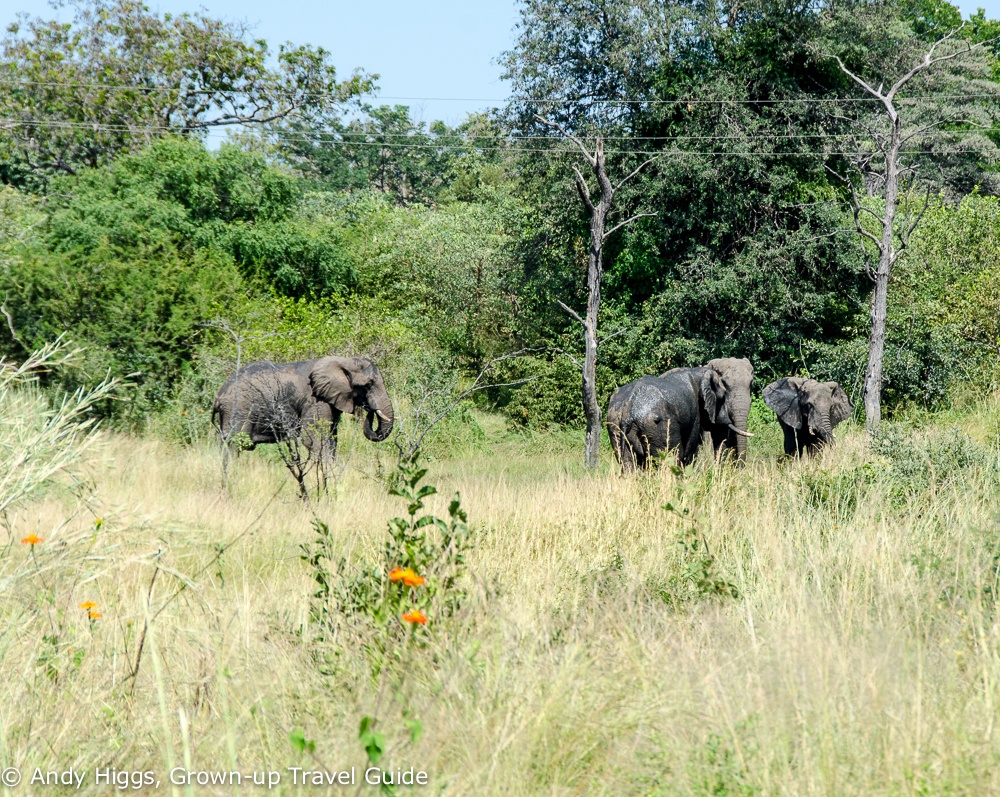 I’d read stories about all sorts of wildlife wandering through town and the proximity to nature became even clearer a few minutes later when we saw these elephants just a few metres from the entrance to the Rainforest National Park.

Since the Bridge is located in ‘no mans land’ between Zimbabwe and Zambia you will need to have your passport with you. This is just a formality and on the tram ride one of the crew members collected our documents to show to the Zimbabwean authorities. While we waited rain fell steadily from the skies – but of course this was in fact spray from the Falls produced by the huge amount of mist I’d seen from the chopper.

Border procedures completed we were off again and just a few minutes away the Bridge came into view. 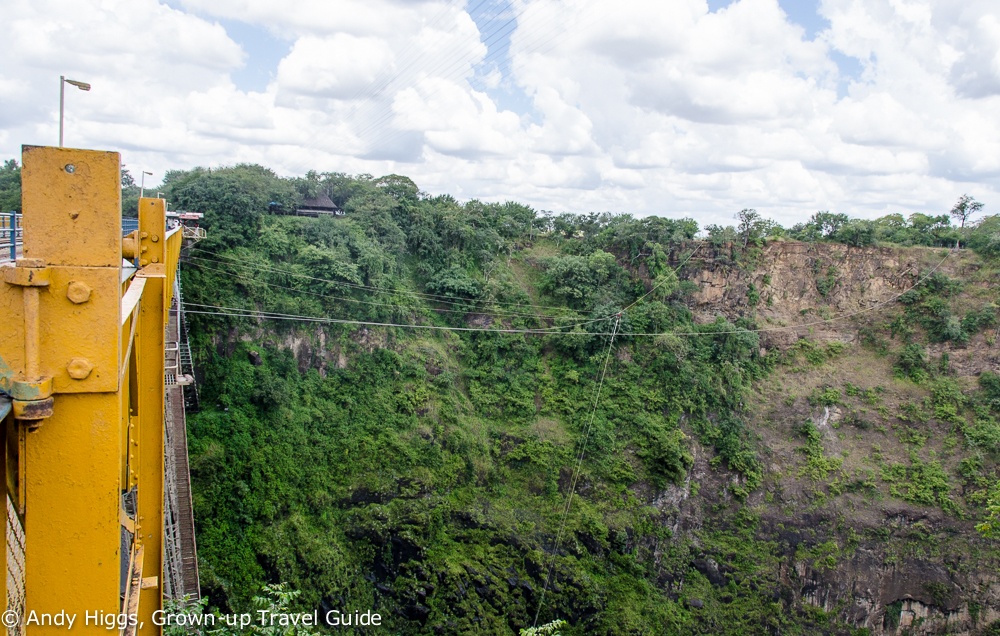 Trundling over we passed the bungee platform and I caught a glimpse of the zip line. This was going to be good!

Arriving on the other side of the bridge we disembarked the tram for the Bridge Cafe.

This is the only restaurant in either country with a view of the face of the Falls. The cafe is built on a platform over the Batoka Gorge and is the perfect location to watch other people do crazy things while taking it easy with a cold beer or a bite to eat. 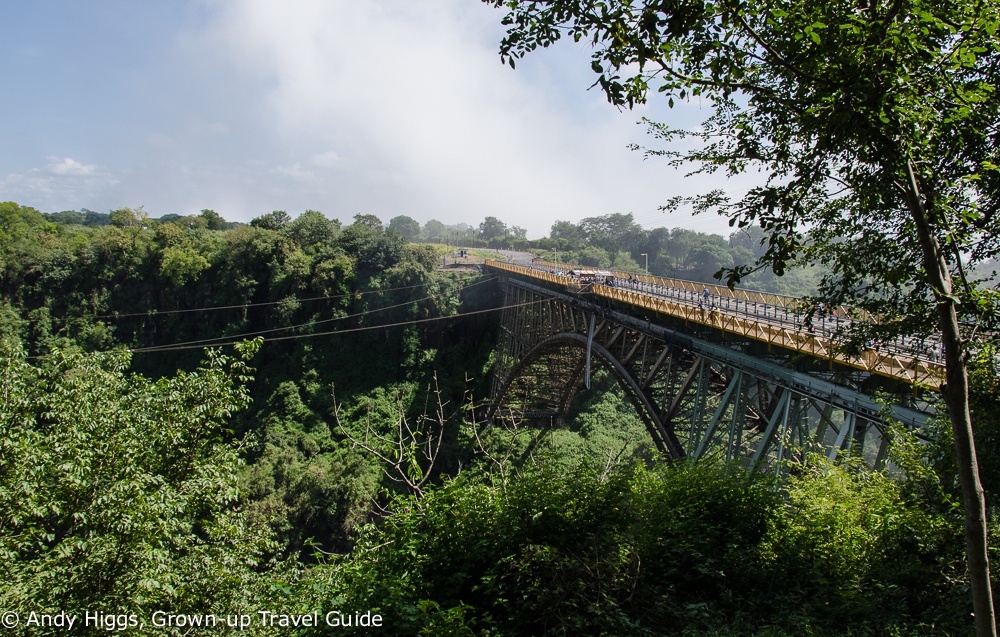 On this occasion I was to be one of the ‘other people’. As I’d booked a Bridge Slide I was taken aside to get into my harness and go through a safety briefing while the rest of our group kicked back and put their orders in…

As mentioned previously I swore to my wife I wouldn’t try bungee jumping for the first time while travelling on my own in Africa, but I did get permission to try the Bridge Slide (zip line) across the gorge. It was fantastic, but again I’ll let the GoPro do the talking:

This experience is marketed as family-friendly and the mildest of the Bridge activities. I would agree, and add that I felt absolutely safe the entire time as the staff are professional, give clear instructions and instil confidence in their customers. The equipment is in perfect condition and safety is taken very seriously – those ropes can bear a huge amount of weight.

As you can see you are pulled in by a guy on the other side and you then need to walk a short way under the bridge to the exit point.

Having walked back over the bridge to the cafe I rejoined the rest of my group for the Historic Bridge Tour. This starts with a theatrical performance with an actor playing the part of Georges Imbauly, the Frenchman who was the Chief Construction Engineer for the Victoria Falls Bridge. 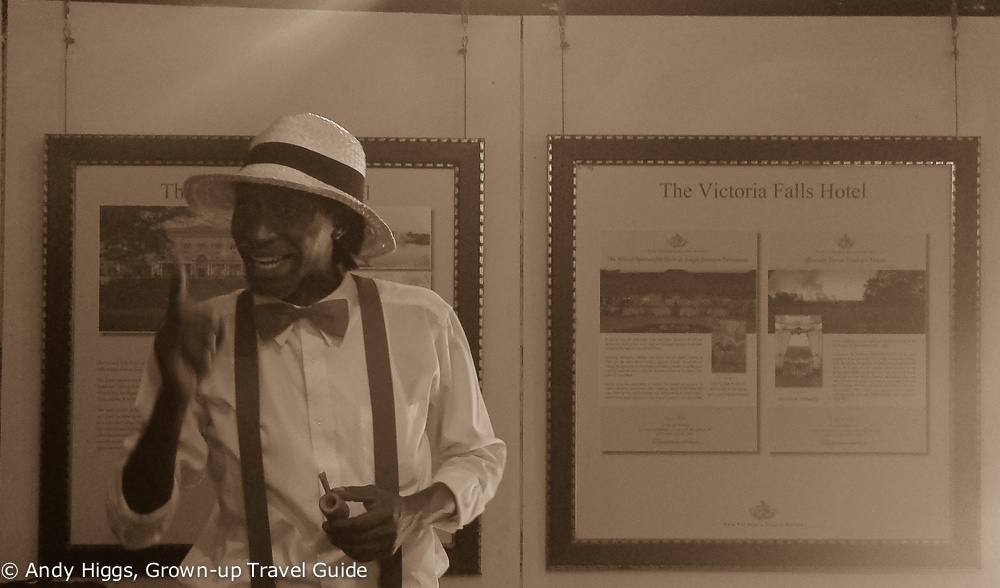 Kitted out in period costume, he regaled us with stories from the construction, anecdotes from the notorious drinking sessions after each day’s work at the Victoria Falls Hotel (which was built first) and some impressive facts and figures. It may sound a little cheesy but it really isn’t – this was one of the highlights of the day and both informative and a lot of fun.

Once the presentation was over we were given full safety harnesses once more as it was time to join our architect friend to walk beneath the Bridge.

It had been quite a morning but there was plenty more excitement on the agenda for the afternoon, and you can read all about it in the next post.

6 of the best…places to take the kids in Chicago