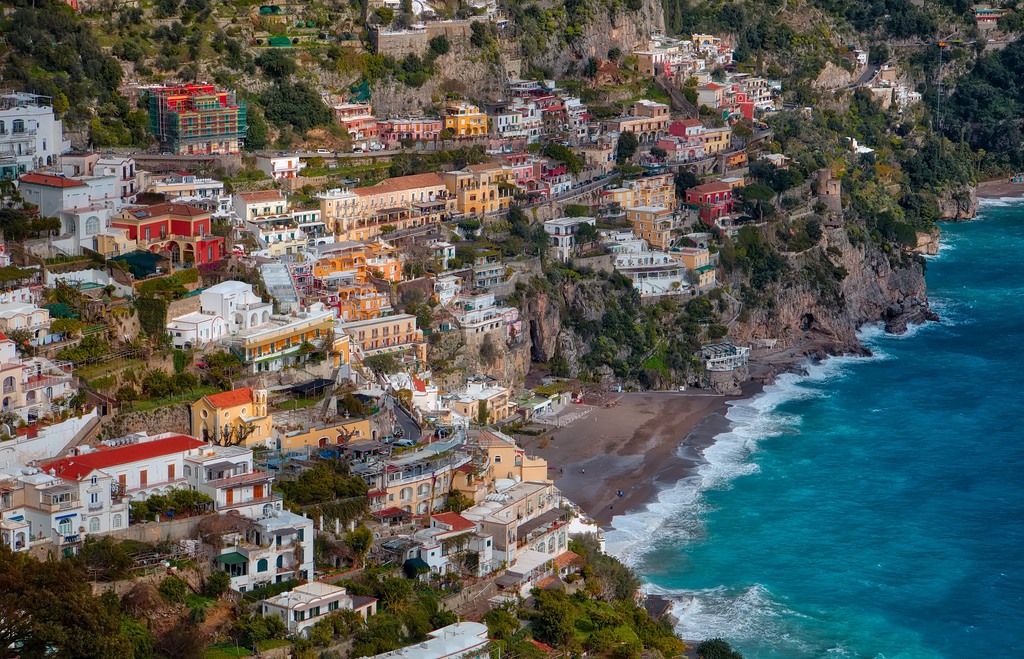 Europe has its fair share of stunning road trips, but perhaps the most famous and possibly most beautiful is the stretch of road between Salerno and Sorrento on the Costiera Amalfitana, better known as the Amalfi Coast. When the weather is good – which in summer is almost guaranteed – nothing beats a leisurely cruise along on of Italy’s most fabulous routes. You’ll need a place to stay, so check out Amalfi Coast villas for a great deal on a rental property on the Amalfi Coast.

You will also need a car – call me old-fashioned, but if it’s Italy nothing beats a MINI. The classic British version would be best, but I agree it’s unlikely that your rental car company will have any for hire. The rebooted BMW models have the advantage of being a lot more comfortable with all the mod cons you could require, and they also come as convertibles, which is what you should be aiming for.

Okay I may be too heavily influenced by “The Italian Job” – or even “The Trip to Italy” and it’s true, you are going to love this road trip no matter what set of wheels you are driving. But try to get a MINI convertible…

As you probably know, the roads along the Amalfi Coast are not straight, wide autobahns (perish the thought!) but rather narrow, winding and at times a little challenging. It’s easy to get distracted by the incredible views and antics of fellow road-users, but keep calm, take it easy and enjoy one of the most thrilling road trips on the Continent.

Ideally you’ll want to avoid the absolute peak season when tour buses can be a pain and the sheer weight of traffic may spoil the experience – go early, such as in May or wait until mid-September onwards when the worst of the rush is over.

The Amalfi Drive is a narrow road that snakes along the high cliffs above the Tyrrhenian Sea.

UNESCO agrees with the rest of us that the Amalfi Coast is something special, calling it “an outstanding example of a Mediterranean landscape, with exceptional cultural and natural scenic values,” when adding it to the World Heritage list in 1997.

The most famous towns on the coast – Amalfi, Ravello and Positano – have inspired artists for centuries, including composer Richard Wagner and playwright Tennessee Williams.

Salerno features in the history books as home to the first medical school in the world, founded in the 8th century. More recently it was the site of one of the main Allied beachheads during the invasion of Italy in WWII.

Apart from many medieval buildings and the Schola Medica, the Lungomare Trieste and Castello di Arechi are well worth visiting.

The Lungomare Trieste (seafront promenade) is one of the best in Italy and is lined with many rare palm trees.

The Castello di Arechi (Arechis’ Castle) is a huge castle that towers over the city from a 300m hill. The views of the city and the Gulf of Salerno are reason enough to make the journey.

After Salerno, the next stop of note is Vietri sul Mare, a village with many viewpoints where you can take in the stunning coastline. The road continues past two villages – Maiori, which has an excellent sandy beach) and Minori, where you can visit the ruins of an old Roman villa, before heading inland to Ravello.

Ravello is a stunner – and widely considered to be one of the most romantic small towns in southern Italy. The town is situated on steep slopes and features quiet streets and green gardens as well as unforgettable views from over 350 metres up.

The most famous sight here is the Villa Rufolo, dating from the 13th century. Popes, kings and Richard Wagner feature on the guest list – the latter wrote part of his opera Parsifal here in 1880. Again, the views from the gardens are unbeatable.

Ravello also features an 11th-century cathedral that is well worth a visit.

Enjoy the atmosphere in Amalfi

The road drops from Ravello down to Amalfi, which used to be one of Italy’s most powerful maritime republics. All sea trade in the Mediterranean was once governed by the 12th-century Tavole Amalfitane, one of the first maritime codes in the world. Amalfi is also believed to be the place where the mariner’s compass was first introduced to Europe.

Today, the town’s beautiful coastal setting, large number of cafes and shops as well as its great weather have made Amalfi extremely popular – in high season you will not be alone here.

Visit the Arsenal of the Maritime Republic (Arsenali della Repubblica) for an insight into the town’s seafaring past.

Then walk along the Valle dei Mulini, a steep-sided ravine dotted with ruined watermills once used to make paper, an industry for which Amalfi was, and still is, famous. The Museo della Carta tells the story of Amalfi’s paper production and is housed in an old paper mill once owned by the Milano family.

Don’t leave without trying the local Limoncello or a gelato or five.

Continuing west from Amalfi, the corniche road gets even more scenic as it passes Grotta dello Smeraldo, a marine cave of luminous emerald waters that you can visit by boat, elevator, or rock-cut steps.

Next comes the Vallone di Furore, an impressive gorges worth exploring on foot, before you reach the villages of Praiano and Positano.

Praiano is located about mid-way between Amalfi and Positano. Here the beach of Marina di Praia is sheltered by high cliffs, and a great place to escape some of the crowds.

You won’t forget your first view of Positano as you approach round a hairpin bend on the Amalfi Coast road. Allow time to explore this gorgeous town as it is one of the highlights of the entire area.

Stop for a while in Sorrento

Things get more frenetic when you reach the end of this road trip in Sorrento. It’s a famous and busy resort, but still charming and attractive. Spend some days here to make the most of it and pick up some quality souvenirs – ceramics, lacework and intarsio (marquetry items) are particularly prized.

Many of Italy’s prime attractions are close by – the town straddles overlooks Naples and Mt Vesuvius across the water; to the south lies miles of unspoilt countryside, to the north lies Pompeii and other archaeological sites, and offshore is the fabled island of Capri.

How Travelling is Beneficial for Your Health

Travelling to Germany for a football fix