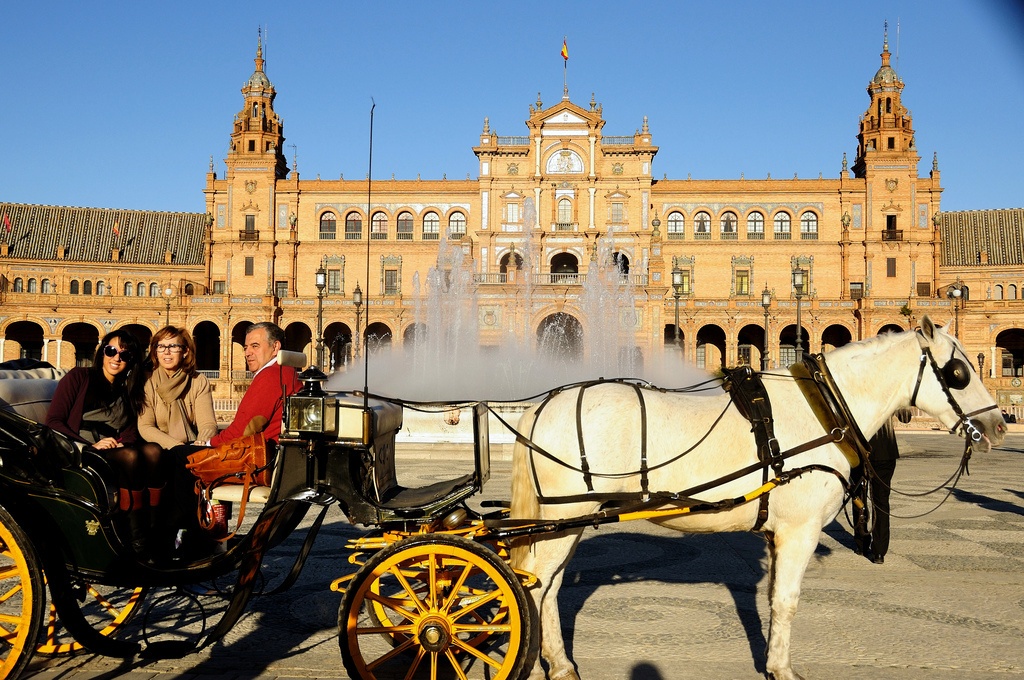 Seville is an historical city located in the southern region of Andalusia in Spain. The city is known for its ancient cathedral and its bell tower, which used to be a minaret. The city is located a short distance away from the beaches of Andalusia and a short flight away from Spain’s largest cities Madrid and Barcelona, and can be reached by high speed rail.

Tour the cathedral and La Gerald

The city’s cathedral was built on the ruins of a mosque. This large cathedral has several halls decorated with marble and golden statues. The domed ceilings are covered in mosaics and gold leaf. After visiting the many halls of the cathedral, several of which have been transformed into galleries filled with jewels, visitors can climb up the Giralda tower. The tower used to be a minaret and during the construction of the cathedral was remodeled into a bell tower. The red stone tower has views towards the city and the river.

Walk around the city centre

Next to the Cathedral square visitors will find the Alcazar and the Barrio de Santa Cruz. The Alcazar is an ancient fortress that was later transformed into a palace. The centric Santa Cruz neighbourhood is known for it large selection of tapas bars that serve taquitos de cazón fried fish accompanied by wine, and is filled with squares with fragrant orange trees. Another way of exploring the city is by enjoying a ride in one of the horse drawn carriages that can be found next to the Cathedral square.

Enjoy tapas in one of the city’s traditional districts

The Guadalquivir river separates the historical city center from the gypsy Triana neighbourhood. This neighbourhood is one of Seville’s most traditional areas, where visitors will find flamenco bars, tapas bars and many restaurants serving some of the city’s most famous dishes. Visitors can enjoy huge green olives on one of the terraces located on the banks of the river. Typical tapas range from the traditional tortilla de patatas potato omelet and salmorejo soup to fried fish accompanied by local vegetables. The city offers a range of Spanish beers and wines, and after a filling tapas dinner visitors can party until dawn in one of the city’s many clubs.

Spend an afternoon in the Maria Luisa Park

The María Luisa park is located on the banks of the Guadalquivir river. The park is one of the city’s largest parks, and in the center of the park visitors will find the Plaza de España square. This square was built for an Expo that took place in the city. Many of the palatial buildings around the square are now used as museums. The square itself is known for its architecture, with tiled niches representing each one of Spain’s provinces. Each niche is decorated with mosaic murals of the region’s landmarks and most famous products. Visitors can explore the rest of the park on foot, by renting a boat and by enjoying a ride in a horse drawn carriage.

How to Make the Most of a Trip to the UK

Travelling To The States? Check Out The Five Busiest US Airports

Accommodation options for your city break