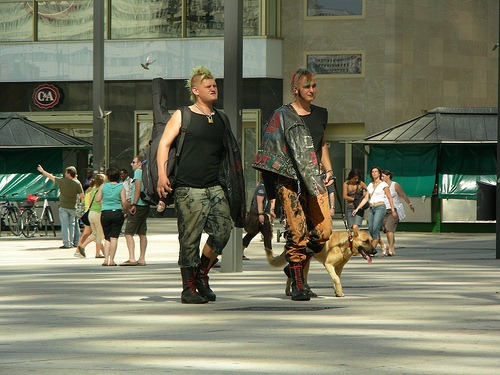 Having lived and worked in Berlin for a couple of years right after the fall of the Wall and visited several times in the years since, I’ve had the chance to witness huge changes to the city which is now the German capital.

It wasn’t when I lived there, and there was massive opposition to the idea of relocating all those politicians from Bonn, just like there were huge demonstrations against the idea of Berlin hosting the Olympics in 2000. But while the latter bid failed Berlin regained its status as the capital of the reunified German republic and in the years that followed the city changed almost beyond recognition – both physically and demographically.

But trips back reminded me that no matter how different the Berlin of 2015 may be, this dynamic and still slightly chaotic city has a few traits you just don’t see elsewhere.  It is this extra seasoning of strangeness that lifts Berlin above the standard European city break fare and adds a further reason to visit.

Many would say it lives on in other places too, but punks are way more visible in Berlin. Some tourists took a photo of me in 1991 and the only reason I can possible conceive for their doing so was that I was (badly) dressed in black, wearing big Doctor Marten’s boots and hanging around in the roughest part of Kreuzberg. This isn’t me – or that picture – by the way… 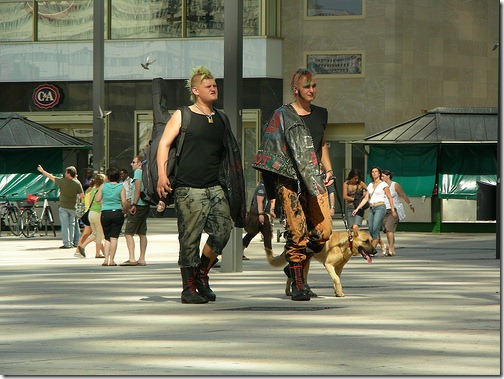 The situation was reversed last week when on the U-Bahn back to my hotel a couple of (real) punk girls boarded the train and I had to sit on my hands to avoid the temptation to take a photo. It would have been a good one too – dressed in black (natch) and with tattoos and piercings galore, they sat drinking ‘sekt’ (sparkling wine) from champagne glasses while vehemently criticising social services. Only in Berlin…

2. People make a strange noise if you poke them

Had you at the title, right? I’m not advocating going round prodding strangers on the U-Bahn. It’s just that this was one of the first things I remember noticing. Having been brought up on the British “Ouch!” or “Ow!” it was interesting to note that a Berliner will say “Aua”. Granted, this is a German thing but I heard it first – and most – in Berlin. And it’s my list. This may well form the basis for a future article “The noises different nations make when poked”. Watch this space.

3. What is it with the sewer smell?

Either I have a super-sensitive sense of smell – for which I have no evidence – or everyone else just accepts the situation as it is. I’m talking about the way you can be wandering around a beautiful part of Berlin (west or east, makes no difference) and suddenly your olfactory system is assaulted by a waft of sewage. I’m assuming this is not what the tourist office refers to as ‘Berliner Luft’ (Berlin air). I remember an American friend who said it was because the sewer system was built far too close to the surface; is this really the case? If anyone knows please do let me know – and is there nothing that can be done?

Another underreported aspect of visiting Berlin in the summer months is the wasp problem. Not when you’re walking around, you understand, but if you feel like having coffee and a cake from a bakery, for example. It is quite unsettling to go into any one of the numerous high-class pastry shops and see that the cakes on display are literally crawling with the yellow and black pests. Yet even more astounding is that nobody takes any notice – which leads me to assume that this is Berliner acceptance in the same way as number 3 on this list.

5. You never, ever need to ask someone the time

I would love to know how many publicly-visible clocks there are in Berlin. One thing’s for sure, you won’t need to learn the German for ‘Do you have the time please?’. This phenomenon is more widespread in the western part of the city and may have something to do with the fact that because public transport actually runs on time the authorities want to make sure you notice that the bus due to arrive at 11.14 arrives at 11.14 and not 11.15.

6. They seem to think everything tastes better in a bread roll or drowning in ketchup

From the simple boulette (basically like a burger) to the once-proud Wiener Schnitzel and most things in between, they’ll stick it in a dry bread roll and pop it in a paper bag for you. On the other hand, where bread would normally be expected – for example to hold a grilled sausage – the Berliner has other ideas. 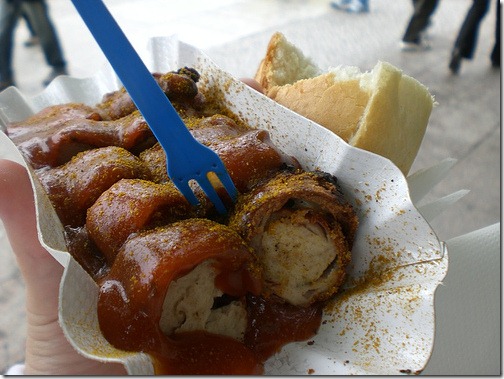 This used to be a sausage

Like cutting the sausage into slices, placing it in a paper tray and smothering it in curry ketchup. Voila! The Currywurst – a Berlin tradition so strong it apparently warrants its own museum. Click here if you don’t believe me.

Hope you enjoyed this light-hearted look at Berlin. We’d love to hear your observations too – add your comments right here!