The Vikings have a long and illustrious history that fascinates many people the world over. From amazing ship-building capabilities to stunning craftsmanship with textiles, metal, and wood, the Vikings had a lifestyle that continues to captivate people to this day. The good news is that the Vikings continue to live on in Scandinavia and there are plenty of places where you can experience the Viking lifestyle all year round.

So, whether you’re looking for a summer vacation with a difference or you want to celebrate New Year’s Eve Scandinavian-style, why not visit some of these amazing Viking sites.

Named after the legendary Viking ship Aifur, the Viking-style bar and restaurant is ideal for anyone looking to feast like a Viking. The interior is adorned with replicas of Viking tools and furniture, making it the perfect setting for a truly immersive Viking experience, Using the Viking’s culinary skills as inspiration, the restaurant offers dishes such as roasted dwarf chicken and mead truffles. The drinks are also heavily Viking-themed and there is always plenty of live music to enjoy as you sit back and relax.

Aarhus, Town of the Vikings, Denmark

Originally called Aros by the Vikings, Aarhus is Denmark’s second-largest city and houses some of the best Viking museums in the country. The Vikings settled here due to its perfect location on the harbor for trade and there are still plenty of remnants of the Viking lifestyle in the city today. Coincide your trip with the Viking Moot Festival on the last weekend of July where you can shop like a Viking at the craft market stalls and watch combating warriors and fierce horsemen do battle.

Vikings are becoming super popular in modern culture; for example, Ragnar Lothbrok’s story in the Vikings TV show, the character of Thor in Marvel movies and even Vikings videogames for those ready to raid the reels. But to really experience the likes of a Viking, it doesn’t get much better than the Viking Festival in Hafnarfjordur in Iceland. The four-day event is held in mid-June and draws visitors from all over the world to enjoy the crafts and battles put on by Viking enthusiasts. Learn how to throw an axe, shoot with a bow and arrow, carve a wooden bowl or have your future told. 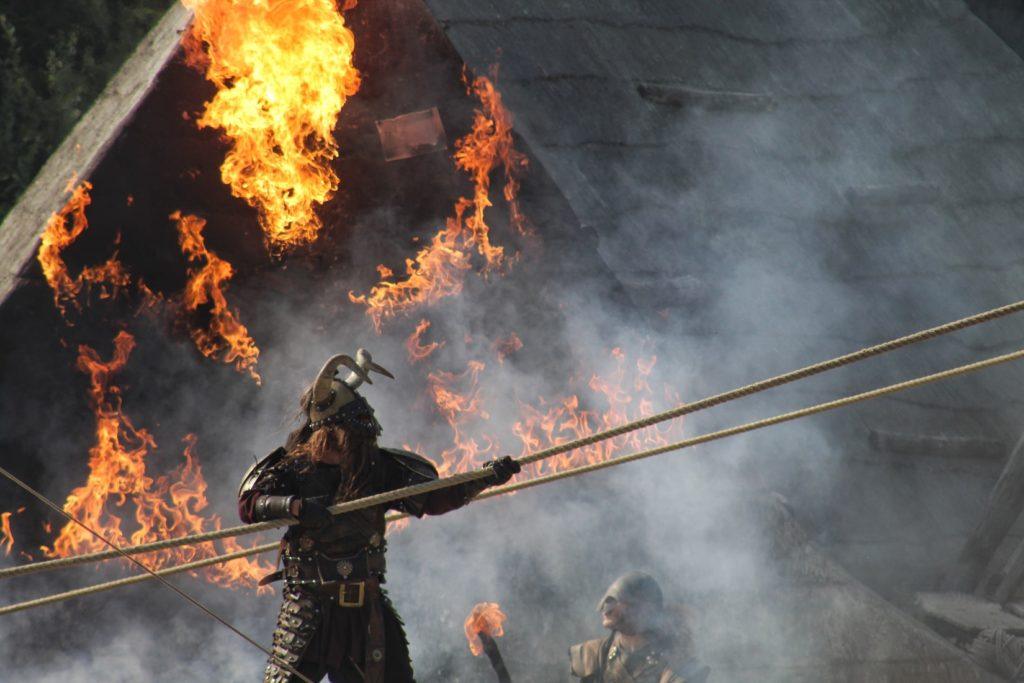 Caption: To live like a Viking, head to the Viking Festival in Iceland

South West Norway is home to a replica Viking settlement which offers visitors the opportunity to take part in an immersive Viking experience. Everything about Viking culture, from the food and festivities to agriculture and trade, is set up to provide visitors with valuable and fascinating insight into day-to-day life as a Viking. The open-air amphitheater is widely regarded as the best in Scandinavia and is home to the longest-running open-air play in Norway.

Opened in 2016, the Life of Viking museum in Stockholm is a fully interactive, dramatized tale of the Viking Age. One of the main attractions at this stunning new museum is the 11-minute journey into the dark exhibition hall which reveals all aspects of life during the age of the Vikings, from life at home with the family to Vikings traveling around the world.

The Vikings were well-regarded for their expert shipbuilding skills and advanced sea-faring capabilities. These can be admired in all of their glory at the Viking Ship Museum in Oslo. Featuring two of the best-preserved Viking ships in the world, the Viking Ship Museum is a must-see for any Viking enthusiast. Explore the fascinating finds from Viking tombs situated around the Oslo fjord and learn about the sleds, boats, textiles and household utensils on display.

As you can see, Viking enthusiasts are spoiled for choice when it comes to exploring Scandinavia and delving into the fascinating history of the Vikings. The only problem you’ll have is choosing which one to visit first!