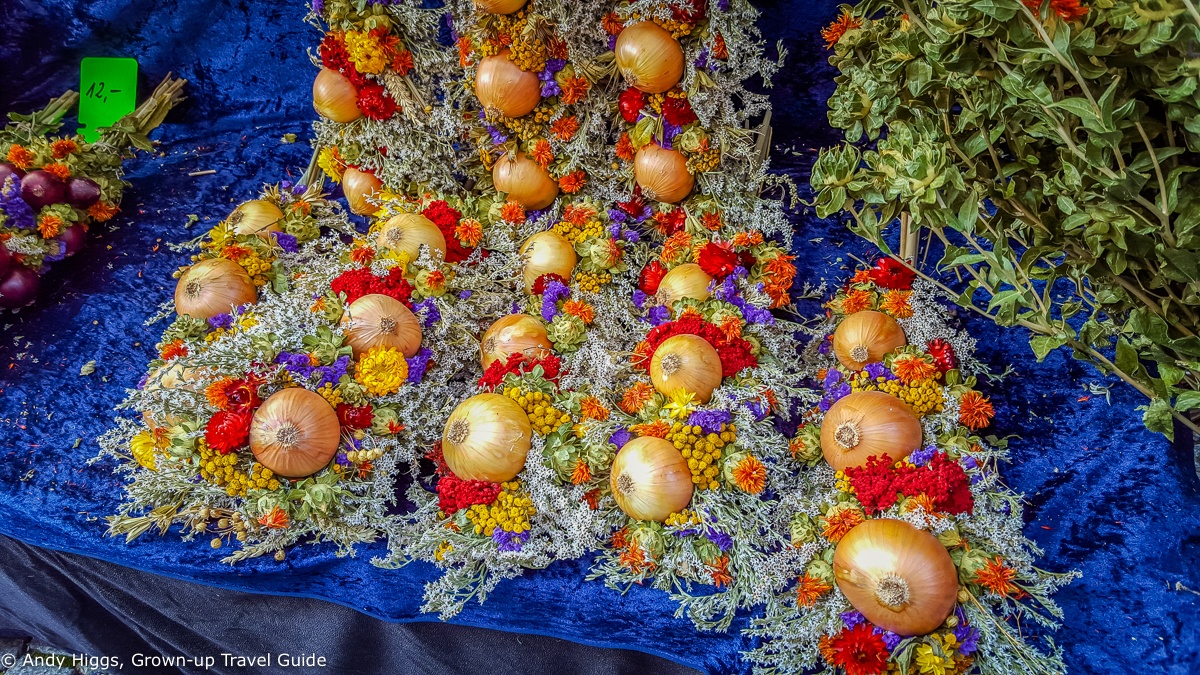 At this point I’m assuming you’ve read the introduction and itinerary as well as the article covering Part One of the Wurst Adventure which we spent in Berlin.

I also recommend you read up on the full details of this project organized by the Nordic Travel Bloggers collective and check out the official German Wurst Adventure website.

Each article will begin with the clarification that my trip was sponsored by the German National Tourist Office for the Nordic region, with help from Deutsche Bahn and Best Western Hotels and the assurance that all opinions are my own, as per usual.

On we go then…

I woke up after a great night’s sleep at the very comfortable Best Western Kantstrasse Hotel in the middle of Charlottenburg, Berlin. Not having had the time or the inclination to unpack for just one night, it took me about 90 seconds to have my two bags ready for my departure.

I left them with reception (the hotel has several lockers for storing luggage) while I joined the rest of the crew for breakfast.

Here again the hotel delivered the goods – a wide variety of hot and cold dishes with some local specialities in there too. So all in all, this is a place you should really consider next time you visit Berlin.

After breakfast we grabbed our bags and headed for the S-Bahn.

On reaching Hauptbahnhof we needed to collect our train tickets from one of the machines. The clock was ticking, and this task proved more difficult and time-consuming than anticipated. One of the two machines on the main concourse was out of order so Janicke stood in line behind the other one.

When her turn finally came, it turned out that each ticket had to be selected and printed separately, and that there were a bewildering number of steps to complete before this could be done. It may be that we missed an express option in our haste but the upshot was that we didn’t have a lot of time left to reach the platform.

On getting there, we found that there were also machines on the platform – so you can save time by printing tickets here. I remembered that the position of the carriages was shown on a display so we were able to find ours and wait on the right section of the platform. This is a hot tip so that you don’t have to walk through the entire train to find your seat – at least if you have a reservation. We were travelling First Class so our seats were assigned.

And many long-distance trains consist of two or more sections with one driver’s cabin connected to another – meaning that it is not possible to walk the length of the train without disembarking and reentering the next carriage at some point. So take note – get there early enough to stand in the right place. 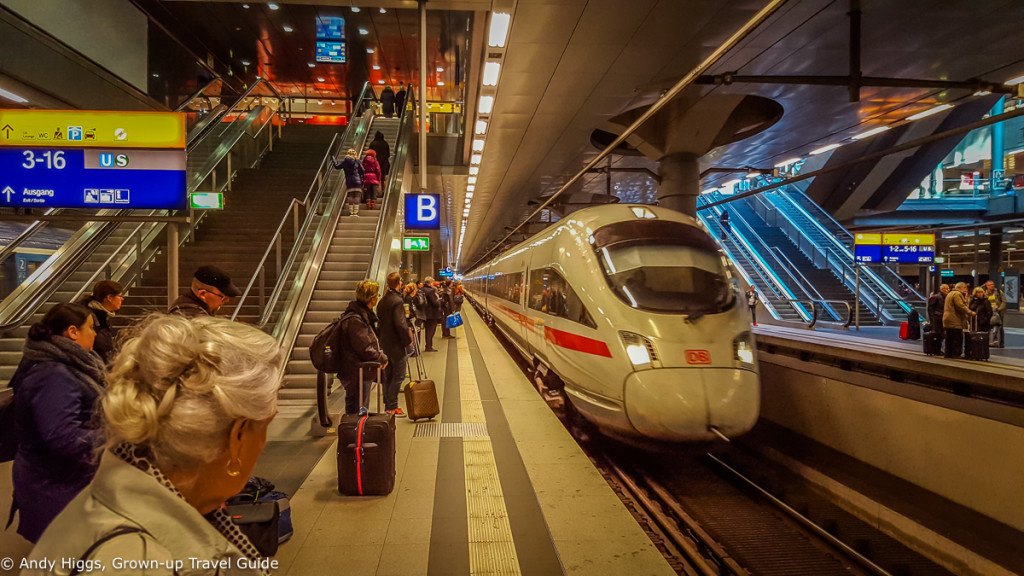 Before long our ICE train glided in. Most people would probably avoid making puns about how “cool” these trains are, but naturally I’m not one of them.

The seats are comfortable and recline if you want to relax, there are power points, complimentary (German) newspapers and wi-fi but drinks and snacks have to be paid for. You can be served at your seat or take a break in the cafe or restaurant car.

Note that there are often special offers allowing First Class travel on Deutsche Bahn for the same price as a regular seat – usually you need to book early to take advantage of these.

Our journey took us from Berlin to Weimar via a change at Naumburg. In total, it took us about 2 hours and twenty minutes which pretty much flew by – these ICE trains don’t hang about.

We made our way across the road to the Hotel Kaiserin Augusta where we met our guide Ann and were able to leave our luggage. Then it was time to check out the city… 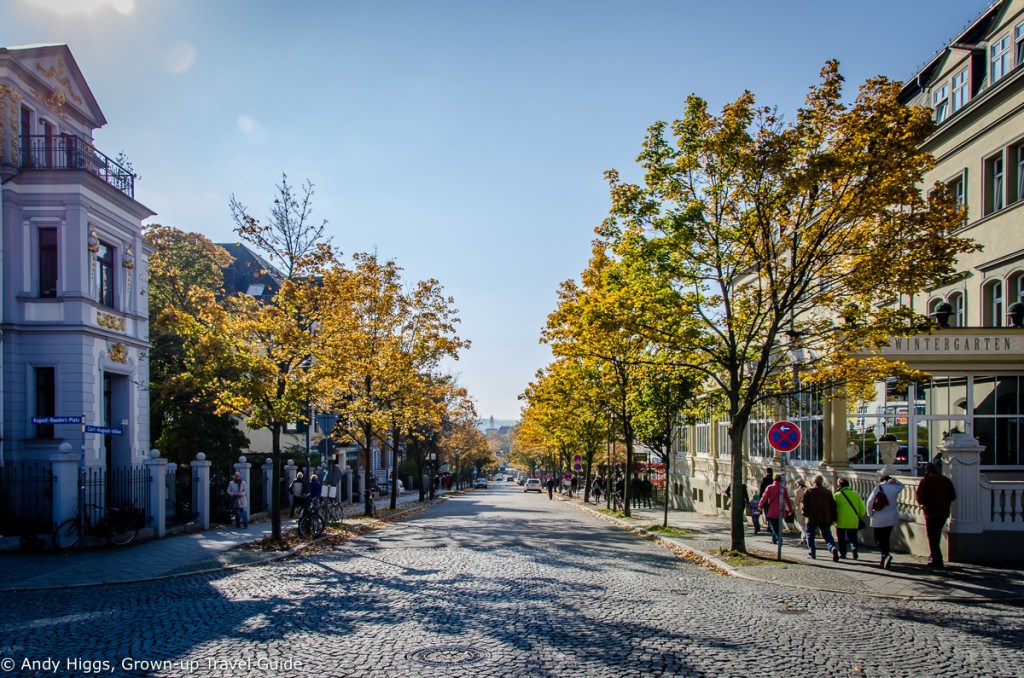 I have to admit that Weimar was not a place I knew much about – of course I’d heard of the Weimar Republic but basically forgotten what it was and that was about it. Well, a little reading revealed that Weimar was where Germany’s first democratic constitution was passed to replace the German Empire, heralding the eponymous republic. It wasn’t to last, unfortunately, as Hitler dissolved it in 1933 but it is still an important era in German history. The Nazi period left its mark in the area too; the concentration camp of Buchenwald was located close by.

But there are other happier reasons to visit – the country’s most famous poets, Johann Wolfgang von Goethe and Friedrich von Schiller lived here for 50 and 3 years respectively, the Bauhaus school of architecture has its roots here and let’s not forget the annual Onion Market.

Yes, rather incredibly, 2015 is the 362nd year that Weimar has celebrated this humble vegetable. It may be called the onion market but this three-day event is more of a festival, and brings over 350,000 visitors to this city of 65,000 residents.

There’s a ferris wheel and other funfair style attractions too.

A huge number of stalls selling not only onions but other food, handicrafts and local specialities fill most of the centre of town. 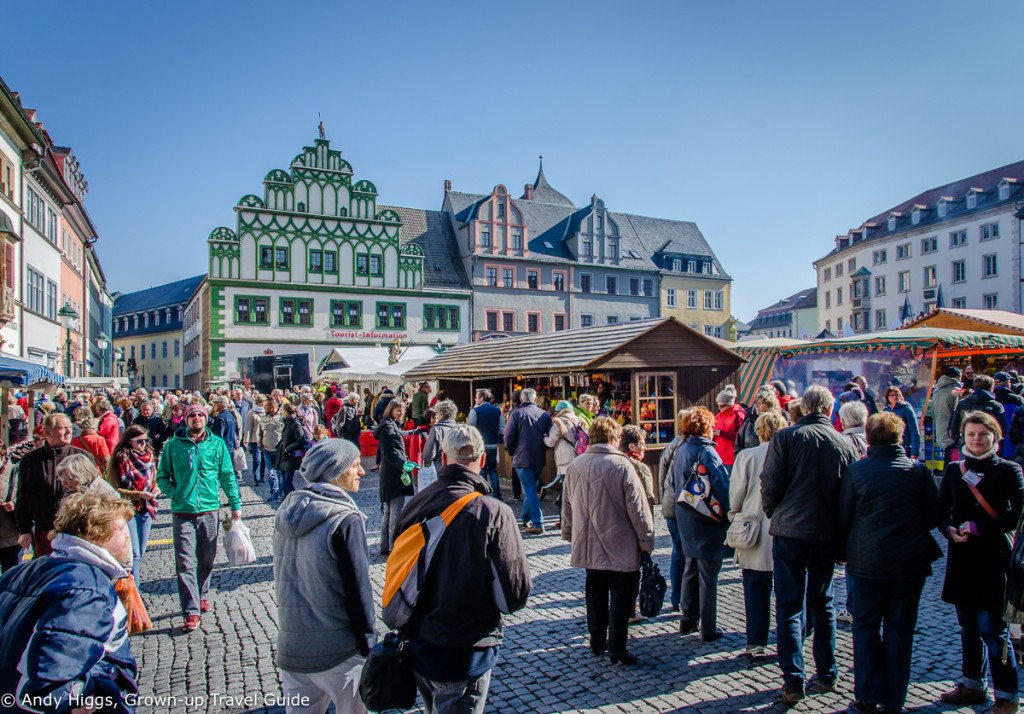 There is also a full programme of entertainment each day. 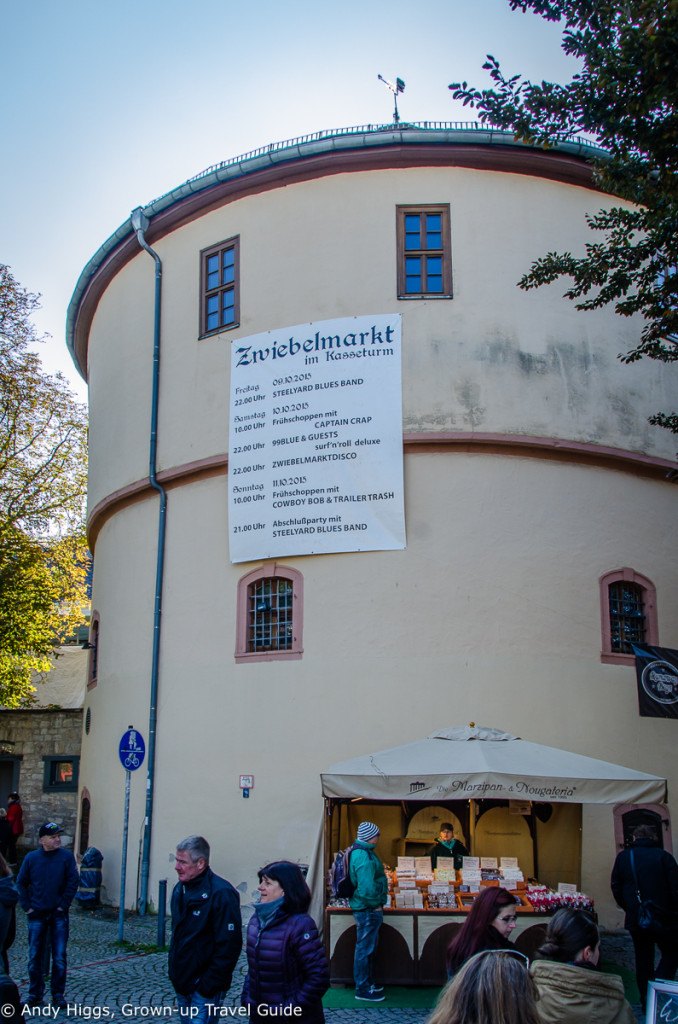 I have to say it was a shame we missed the onion disco at 10 p.m. Perhaps next year… 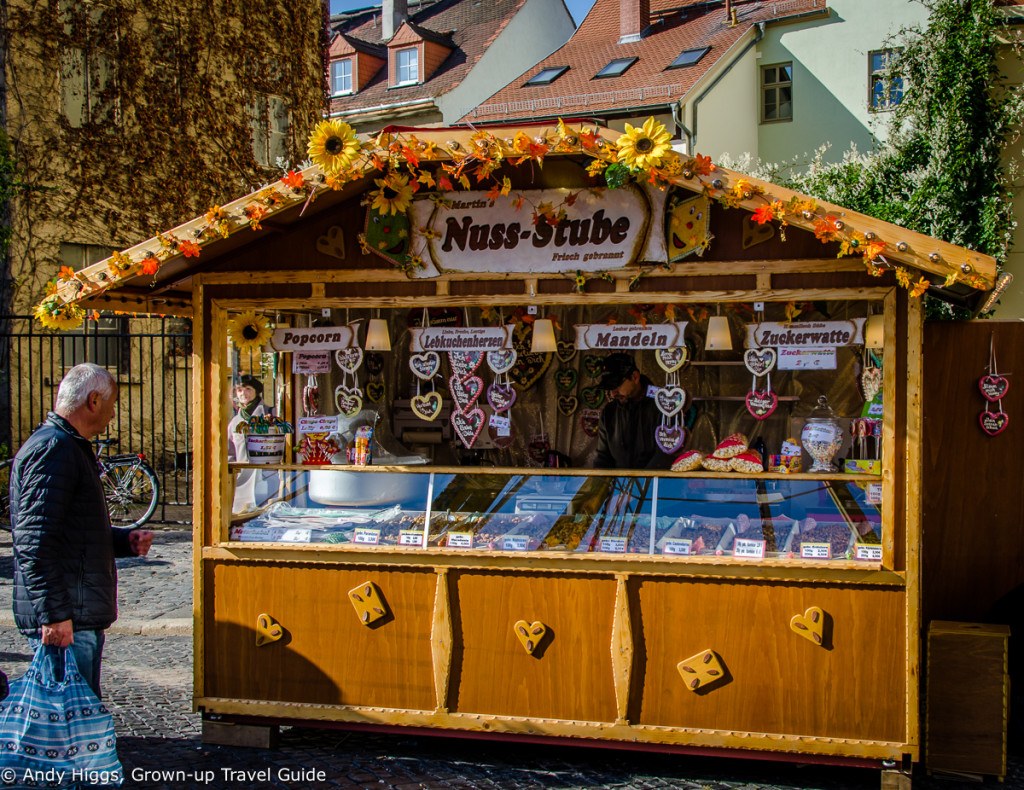 Those with a sweet tooth won’t go home disappointed either. 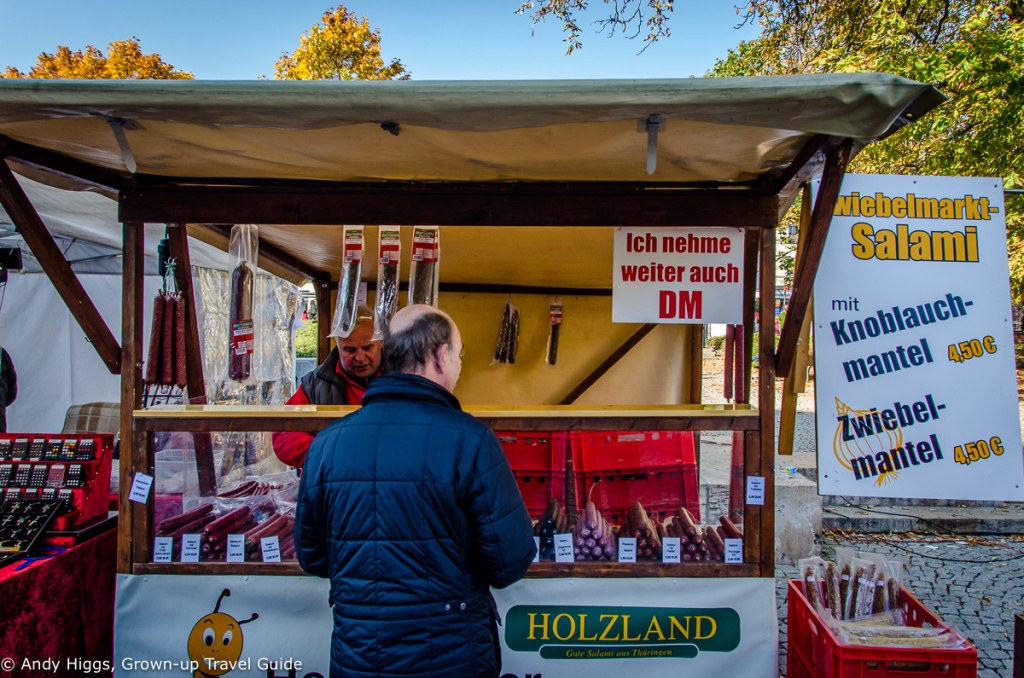 Yes, you can seriously pay in Deutsche Mark at some stalls – presumably this is the ultimate way to show allegiance to the good old pre-Euro days. Apparently it is still possible to exchange DM at government banks at a rate of about 2 marks to the Euro as Germany never set a deadline for when people had to change them. 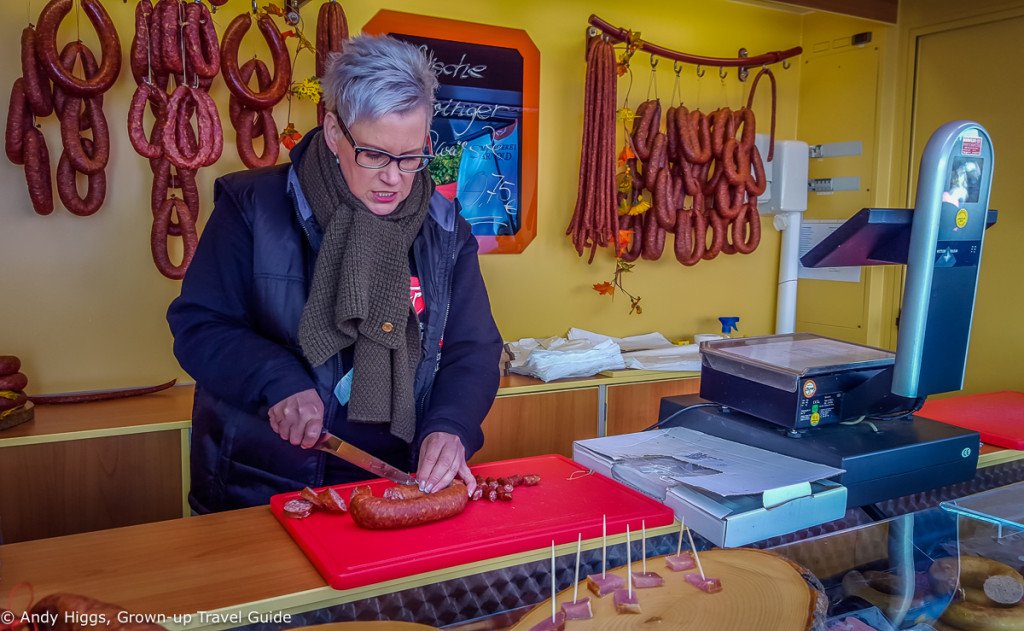 Before too long we reached our first sausage station. Here we bought a nice selection of cold meat – a Thuringian original Knackwurst as well as a thin and heavily smoked version of the same. 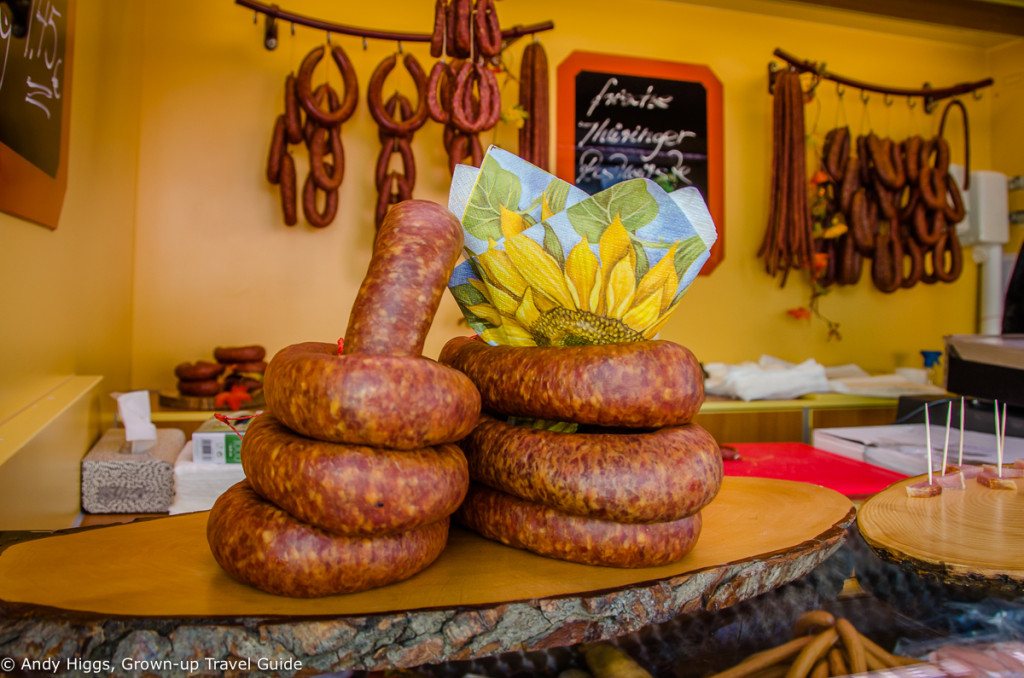 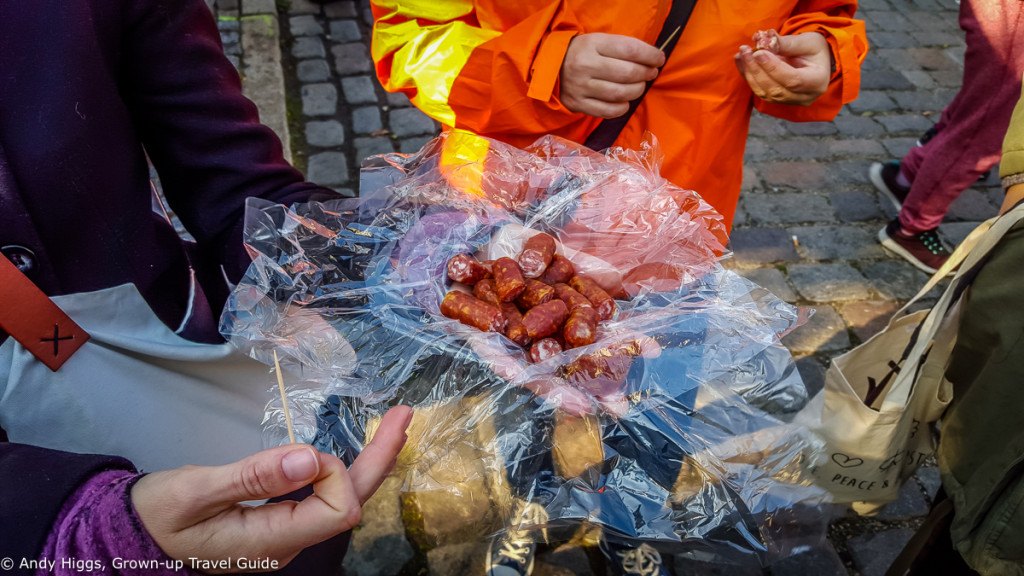 I liked both of these a lot, especially the smoked one. 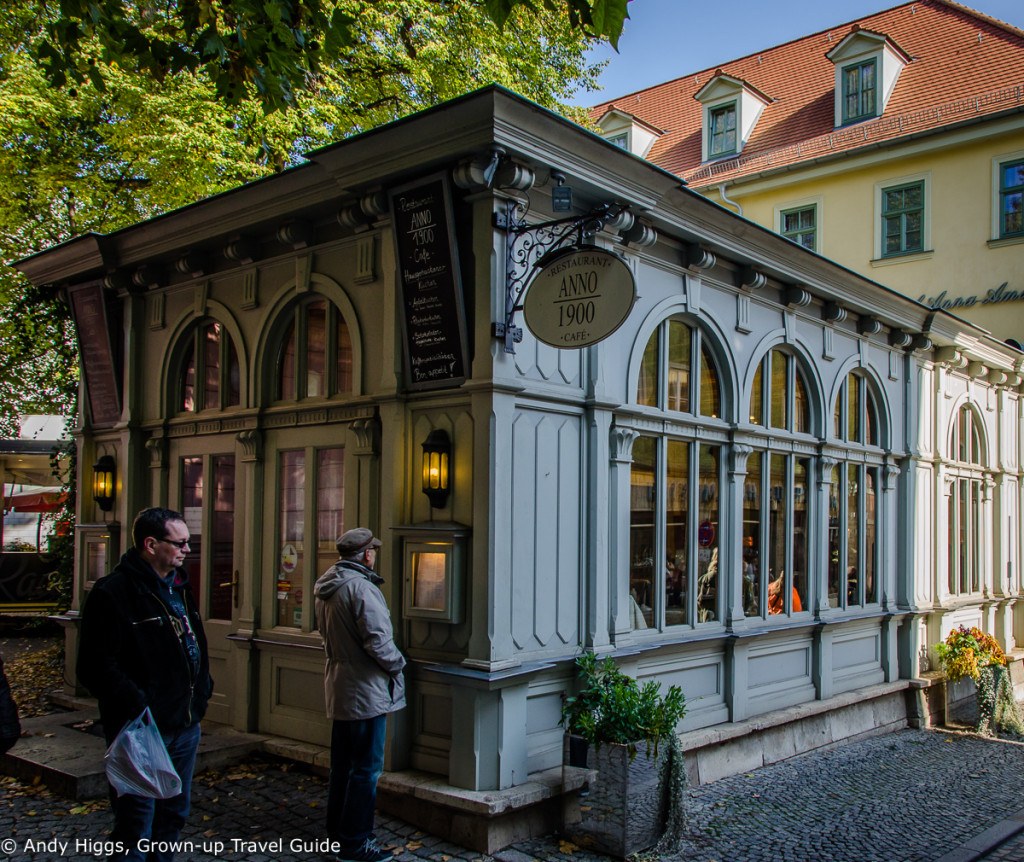 By the way if you need a break from the market or are otherwise in Weimar looking for a bite to eat, don’t miss Anno 1900. This is a lovely little restaurant in the middle of town with an extremely enthusiastic food-loving owner. 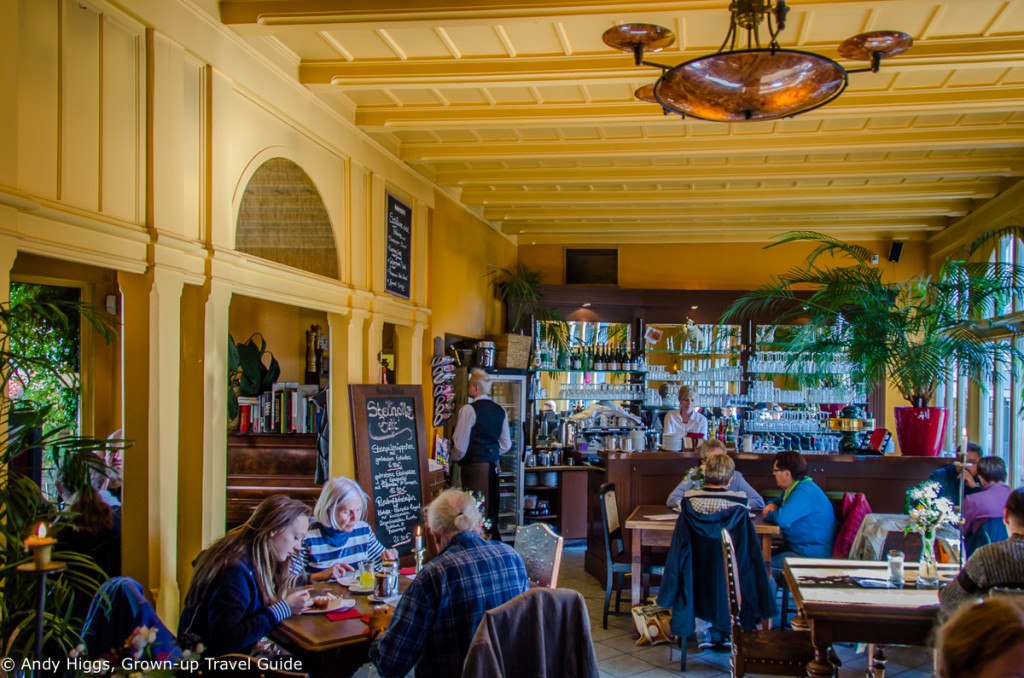 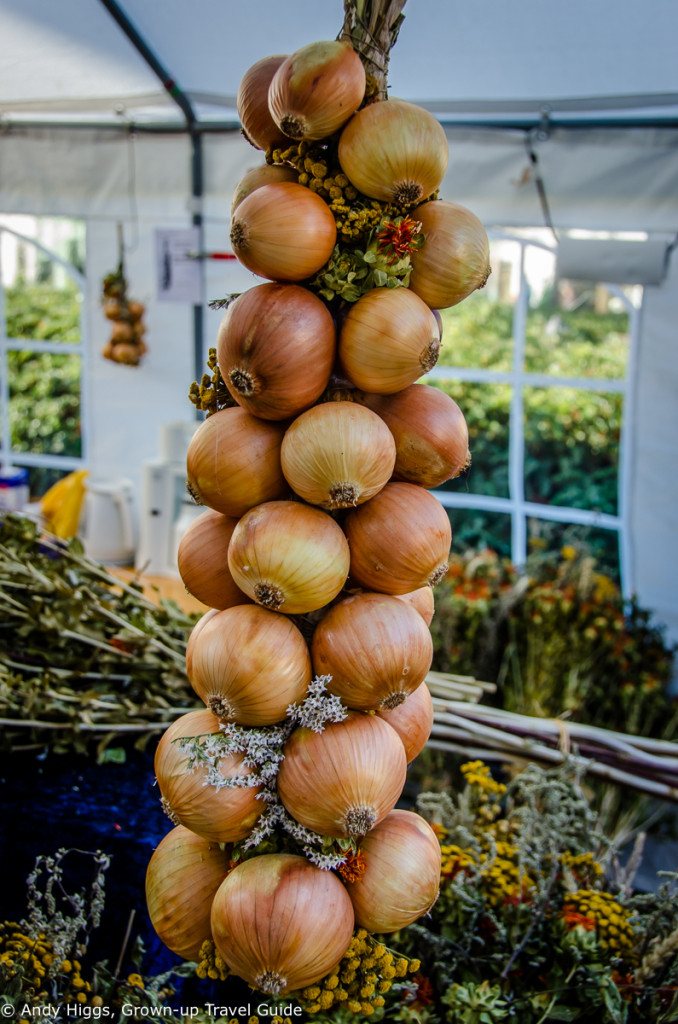 But today was all about the onions, and finally we saw the first of many, many stalls selling them. Don’t expect a market stall pile; here presentation is everything and the onions are as much decorative as tasty.

You can buy other ingredients here too, of course, including these colourful chilis. 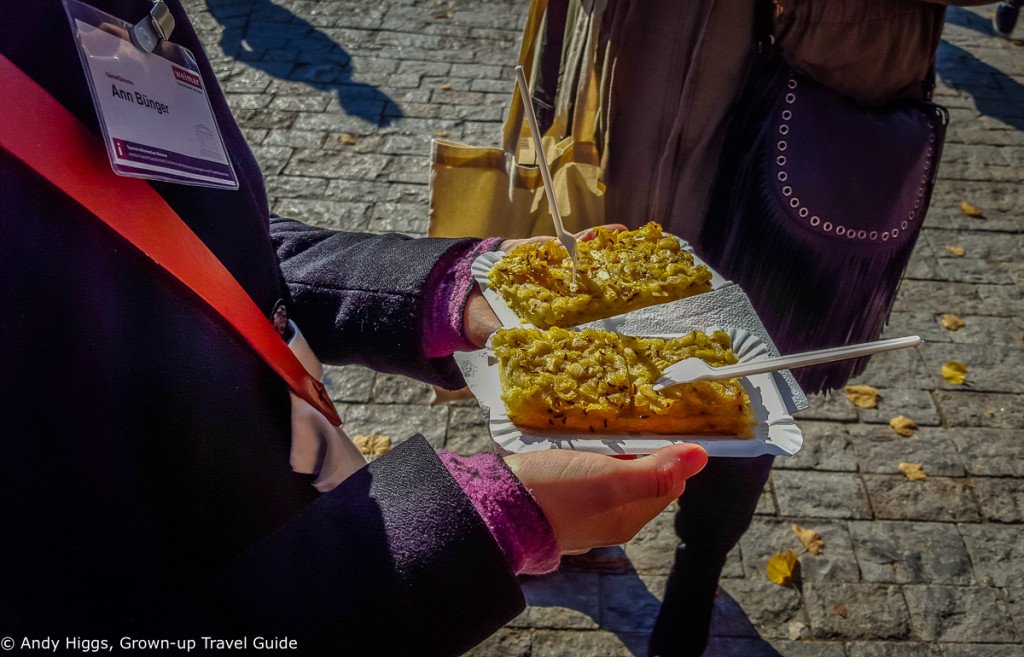 A speciality of the market is Zwiebelkuche – onion cake. A bit like an onion pizza without the tomato sauce, it’s very tasty with a consistency like quiche.

I’m afraid I don’t know her official title, so I will just call her the onion lady until I find out. Anyway, she wanders the market explaining its history and answering any questions visitors may have. 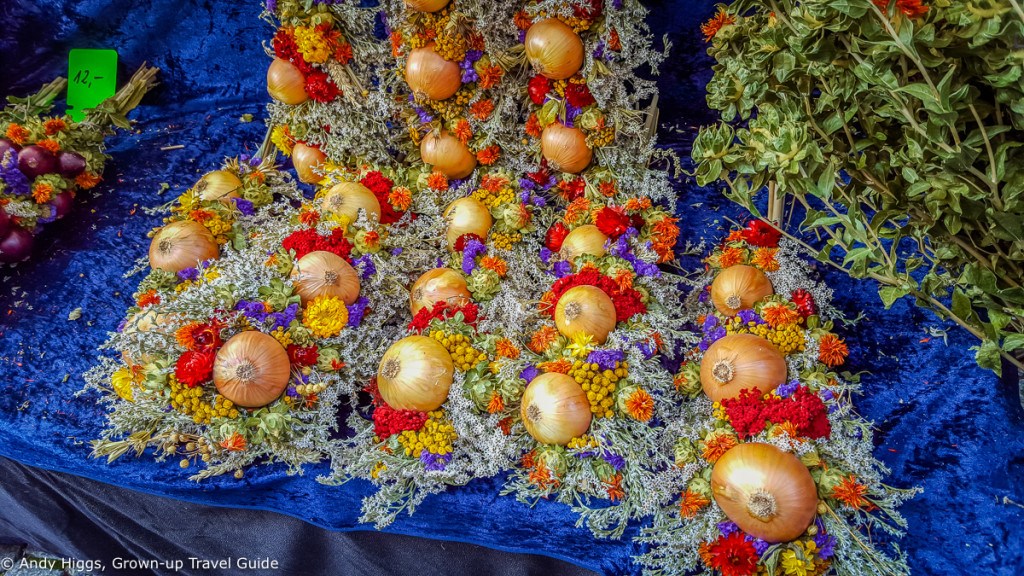 The displays got even more colourful the further we ventured into the centre of the city. A marching band appeared and made its musical way through the crowds. 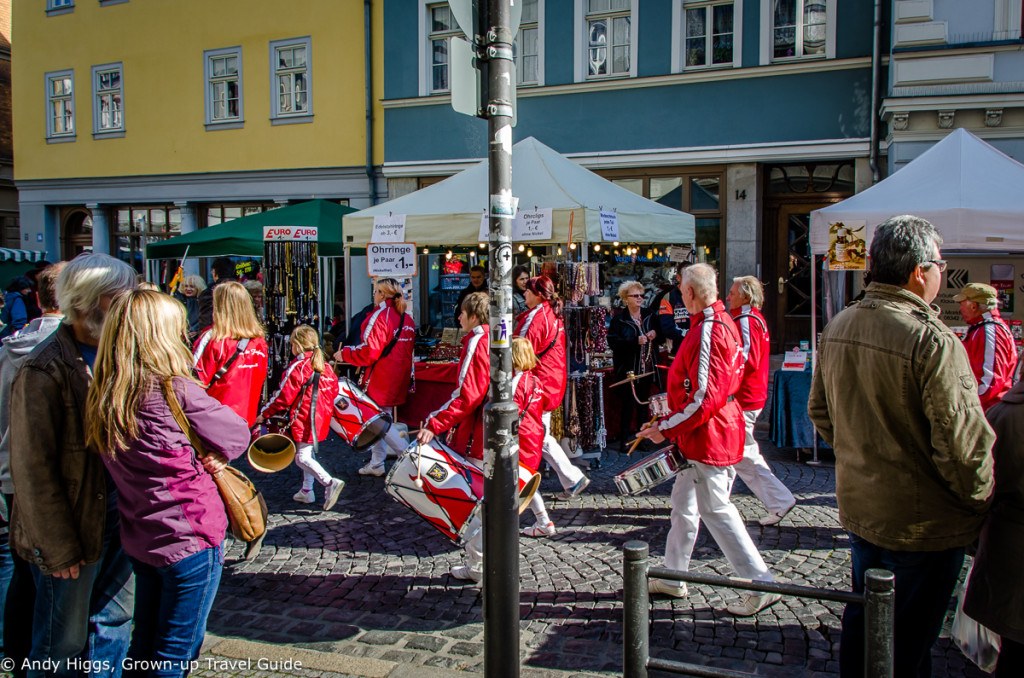 Music is a big part of the festivities and as if to prove this point a marching band appeared and made its musical way through the crowds.

We headed into a local speciality shop to try another sausage – the Goethe Salami – which was also very good. 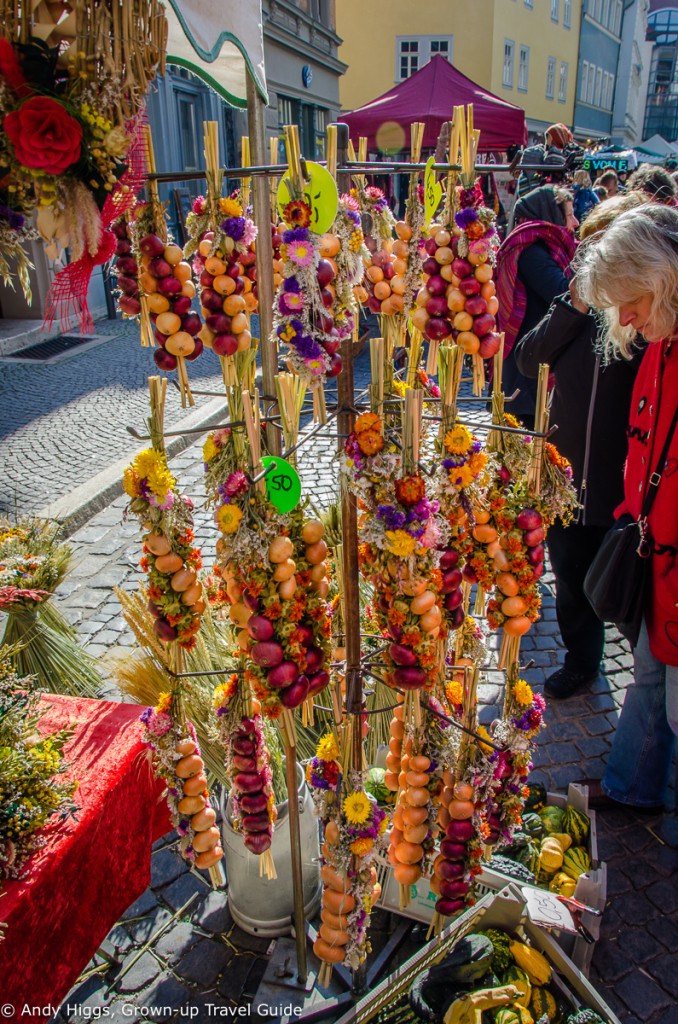 Many of the onion ‘chains’ are beautifully interwoven with flowers. 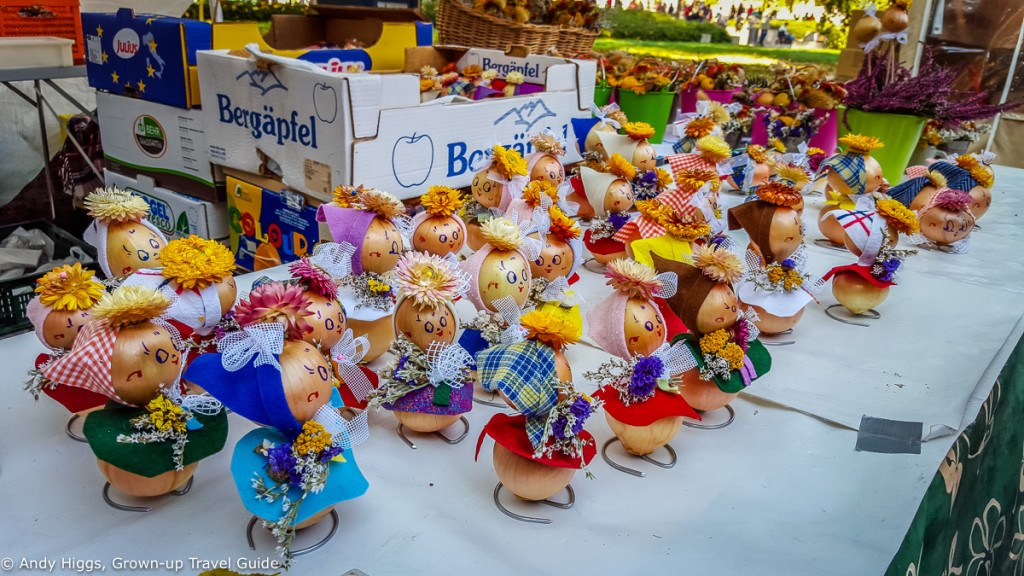 The creativity doesn’t end there – how about these rather delightful onion people? 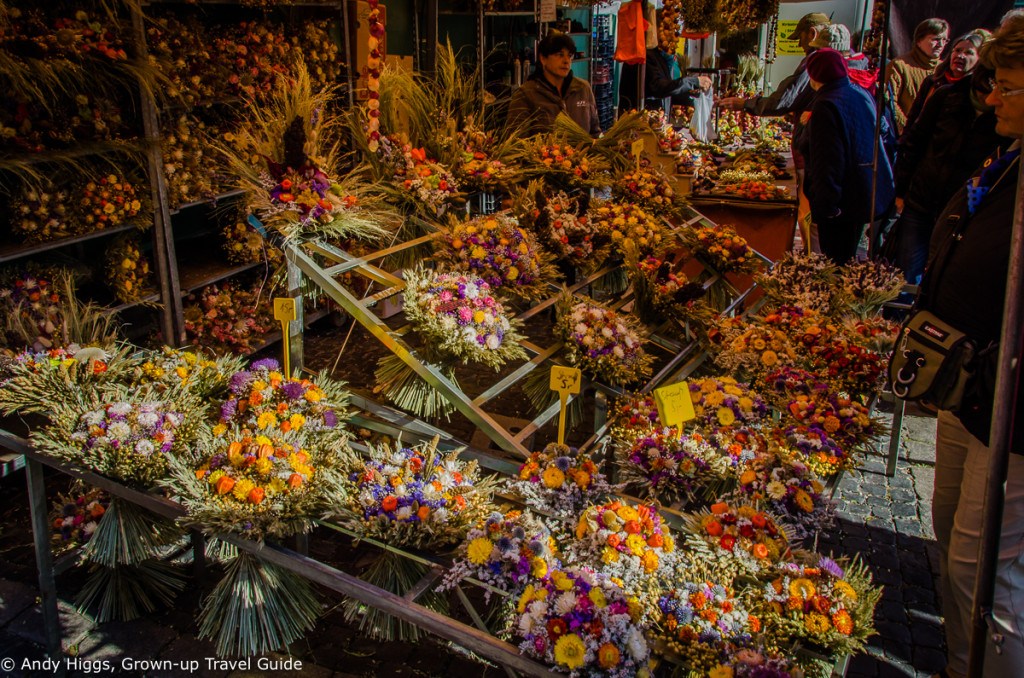 Some of the stalls just sell flowers – but in amazing arrangements. 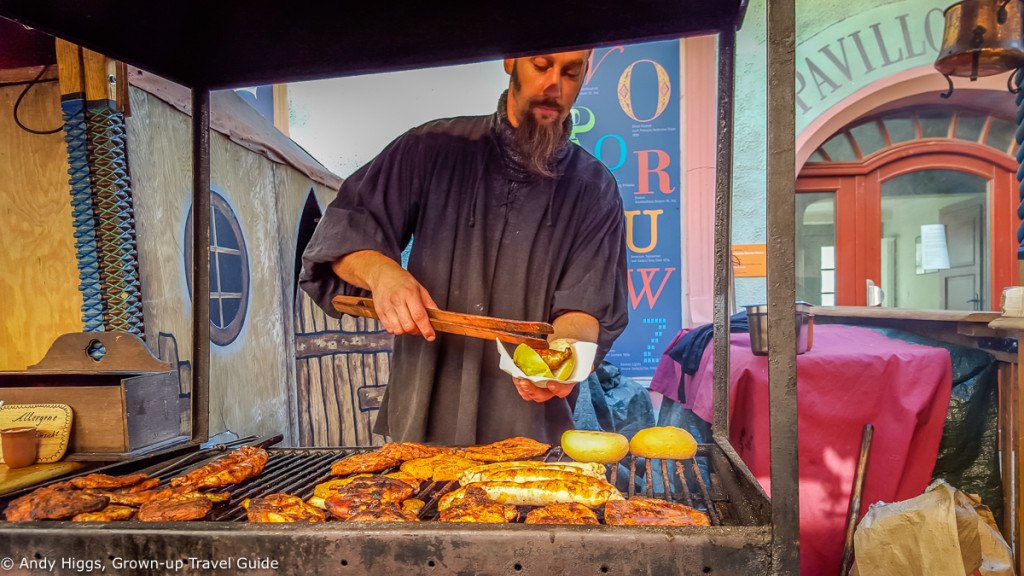 Finally we visisted the medieval section of the market for our first hot wurst of the day: the Thuringian Bratwurst. 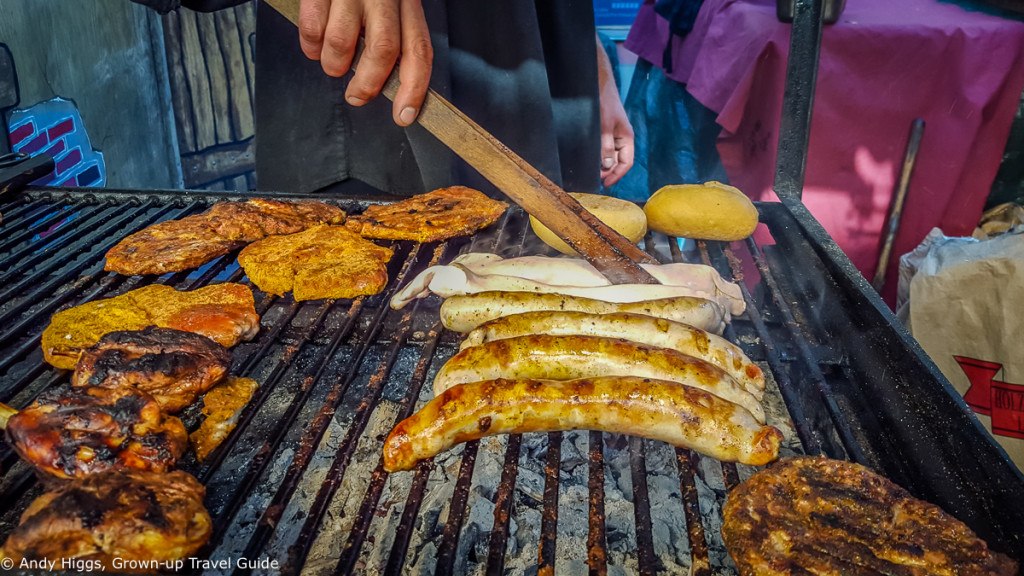 According to EU protection regulations, the sausage is at least 15-20 cm long and consists of quite finely ground, well-seasoned sausage meat in a thin natural casing.

Authentic Thuringian bratwurst is grilled over wood charcoal from raw. As you can see from the above snap, they don’t look good when raw.

If the grill gets too hot, beer is poured on it rather than water which creates a lovely smell and allegedly affects the flavour too. 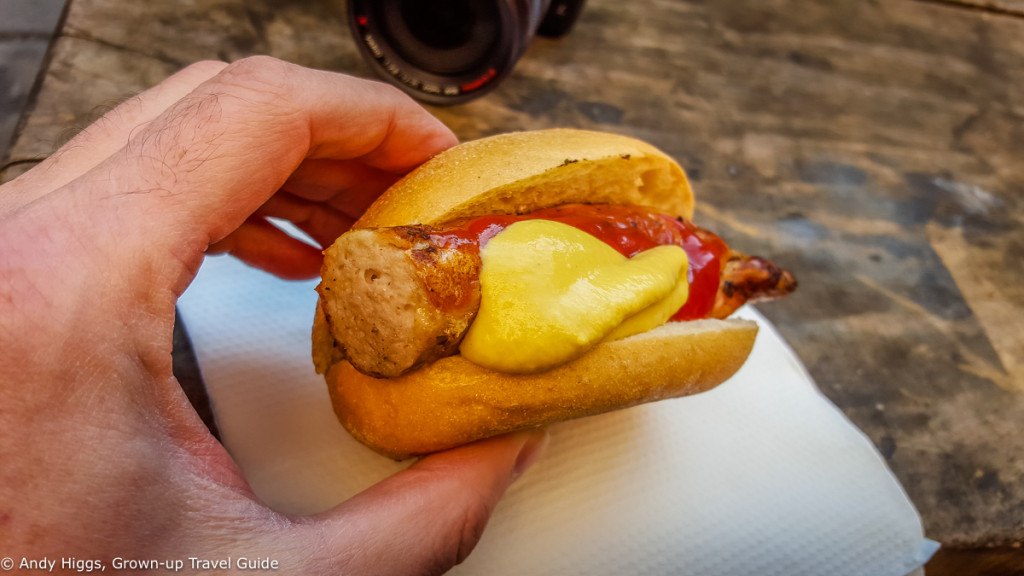 Usually these babies are eaten in a roll, cut horizontally, with original Thuringian mustard which contains a touch of horseradish.

They are very tasty and went straight in at number one.

After our tasting session it was time to leave – so we walked back to the hotel, collected our bags and took the train to our overnight stop of Erfurt – just twenty minutes away.

We would be staying in Erfurt for two nights and I’ll cover the hotel in the next post which is about that city.

Stay tuned for the next instalment of the Wurst Adventure, when we move on to Erfurt 🙂

A Short Break in Flanders, Belgium – Bruges (Part One)