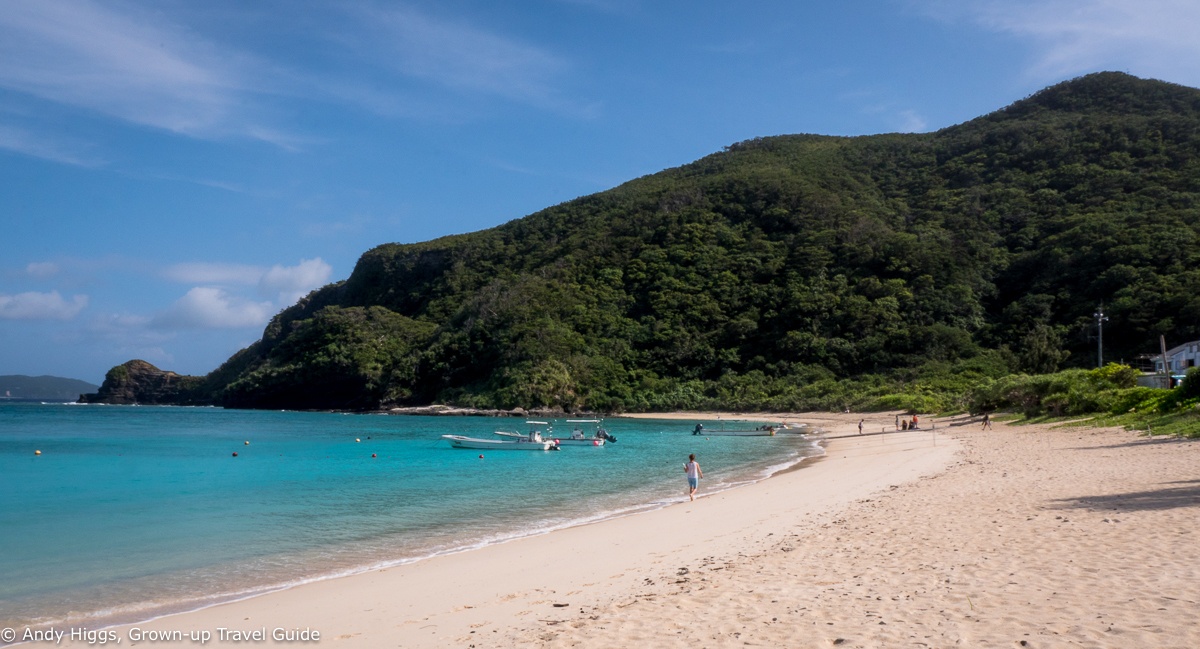 This article is part two of the series “Experiencing the exotic in Okinawa, Japan”

Some dreams do come true

It’s been a lifetime dream of mine to visit Japan – and just like my very belated first trip to the USA, when I finally did so it made me wonder why on earth I had waited so long.

Perhaps the very aspects that appealed to me most – the sheer distance from my base in Europe, the exotic culture, the utterly foreign language and script – played their part in this delay.

I knew that I would have to join a group or have a guide to help me in Japan as I had no intention of wasting my precious time in the Land of the Rising Sun wandering around lost, resorting to eating at western restaurants with familiar menus and missing out on everything I flew half way round the planet to experience. 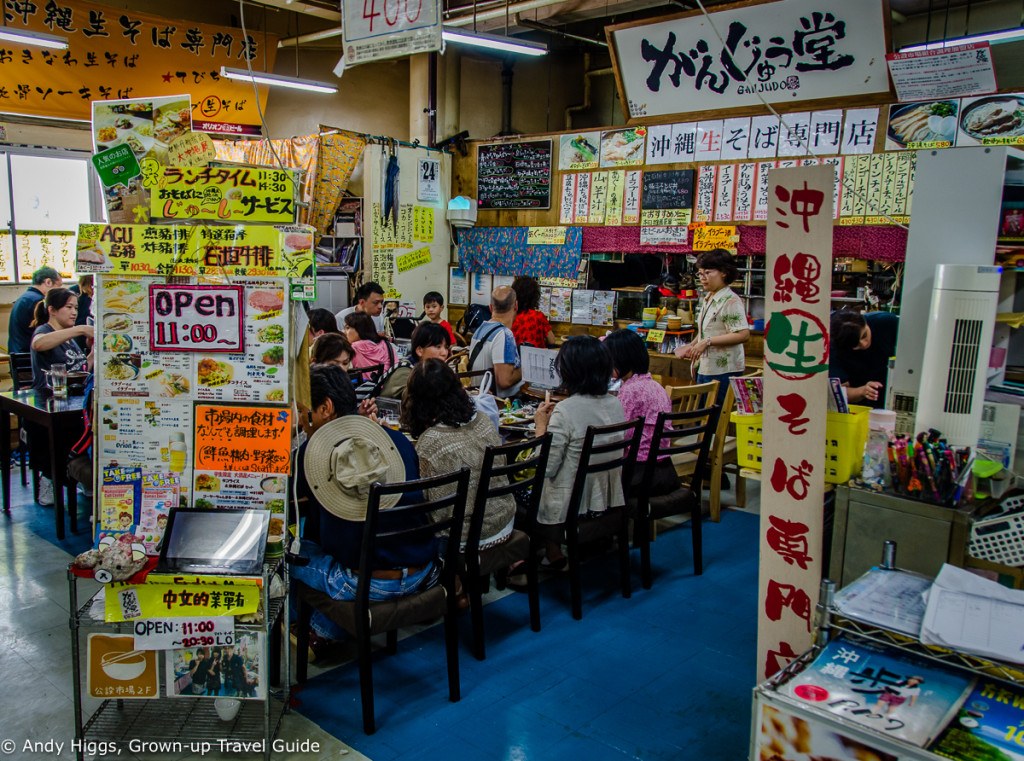 And let’s face it, for a family with pre-teen children living in Norway, two weeks on the beach in Europe is a lot easier, cheaper and more likely to be ‘successful’ as a family holiday.

But when those children are a little older, and the appeal of lying on a beach surrounded by your neighbours from home has long since faded (okay, it was never really there in the first place) then it’s time to set your sights higher.

Of course if you are travelling solo or as a couple without the small ones in tow then you have no excuses either – and I’m going to show you why you should include Okinawa in your Japanese itinerary.

As a destination in its own right, Okinawa offers almost everything you could want from a trip to Japan and a whole lot more that you weren’t expecting.

In the latter category, how about white sand beaches on near-deserted tropical islands and some of the best diving and snorkelling opportunities in the world? 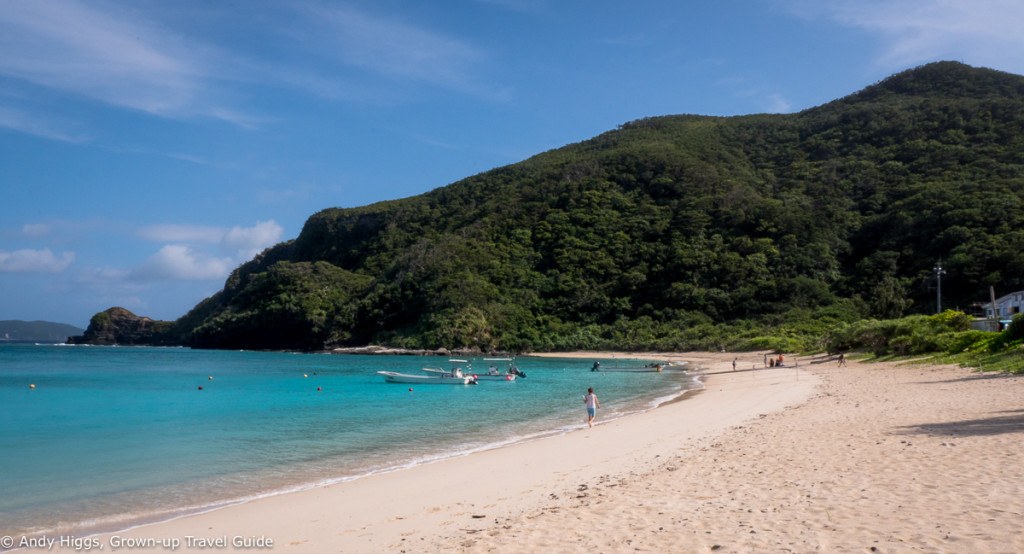 Okinawa boasts a unique culture, a turbulent and fascinating history and superb cuisine that may just help you live longer – its residents top the longevity tables.

You will find some of Japan’s biggest areas of unspoilt natural environment, dense jungle and an impressive biodiversity.

The weather is another draw – it’s warm all year round, summer can last from April to September and the rainy season is short. It can get very humid at the height of summer but the sea breezes provide relief. Typhoons can be an issue in July and August and sometimes later; spring or autumn are probably the best times to visit.

Furthermore, by combining Okinawa with a few days in one of Japan’s megacities such as Tokyo or Osaka you will be fully able to appreciate the variety in this endlessly fascinating country. One visit to Japan will never be enough; but two weeks split between Honshu (the main Japanese island) and Okinawa would be a fantastic start. 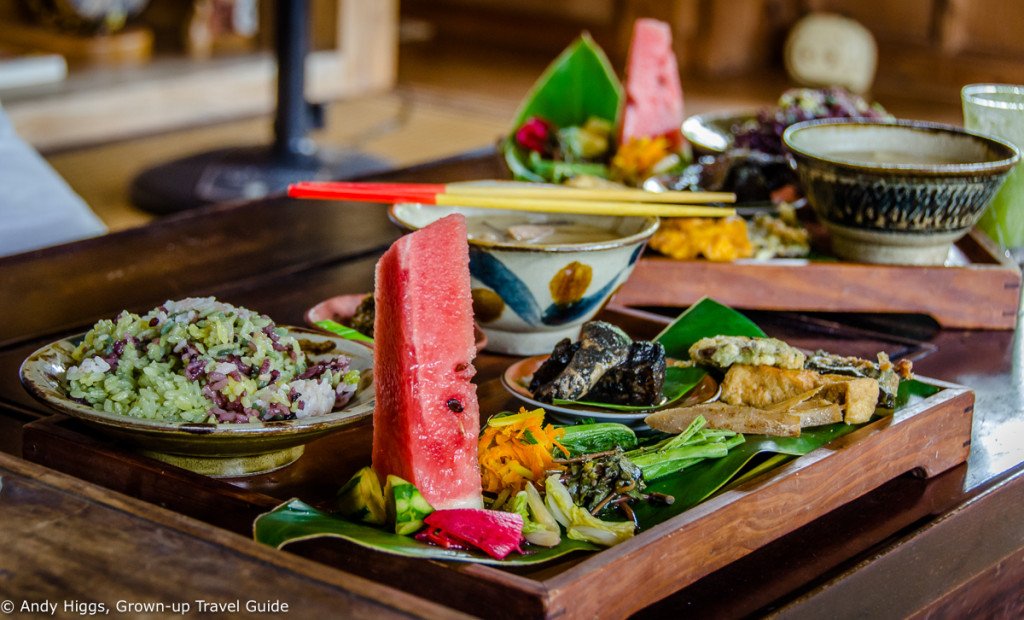 Just understand that you will can expect to be hooked for life – I haven’t felt such a need to return to a place since first setting foot in Africa all those years ago.

In my case I was invited on a press trip by the Okinawa tourist board after meeting with their representative at WTM (World Travel Market) in London late last year. Somewhat miraculously the proposed dates were perfect for me and the short but packed itinerary was almost tailor-made to meet the interests of Grown-up Travel Guide readers.

I would be travelling in a small group – just four of us with a guide and driver – which is what I would have chosen anyway if I had booked it myself. Flights were booked with KLM via Osaka; I had to stay one night in Japan’s third largest city on the way back to make my return connection.

Due to time constraints (our family holiday was starting a few days after my return) I couldn’t stay in Osaka any longer but it would at least give me a taste of urban Japan before coming home.

You’ll find the original schedule in the ‘teaser’ post here – the only changes made were that we used some different hotels than those listed.

An introduction to Okinawa

First, a little clarification. The name Okinawa originally referred to the largest of more than 100 islands collectively known as the Ryukyu Shoto. These days it is also used to describe Okinawa prefecture which covers the southern half of the island chain. The largest island is Okinawa-Honto but this is usually just called Okinawa.

Confused? I understand. It’s a bit like the way many people refer to England when they mean Britain. Or the United Kingdom. Or was it Great Britain?

Anyway, I am using Okinawa to mean the region with its islands and it should be clear enough when I am talking about the main island specifically. As you will have seen we spent most of our time on Okinawa-Honto anyway, with the exception of one night on Tokashiki Island.

Got it? Let’s continue…

I’ve included a couple of maps here to give a little perspective – first of all to show that Okinawa (and indeed Japan) is a long way from Europe – this is the furthest east I’ve ever been from Greenwich, which as everyone knows is the centre of the world. Ahem.

Okinawa is that little dot in the middle there – you can zoom in and out and scroll around to see the whole picture.

Even more interesting though, is where Okinawa is located in relation to the rest of Japan – as you’ll see from it is actually closer to Taiwan than Tokyo.

Here’s a close-up of the islands in case you get lost after scrolling around on the one above:

As well as being by far the largest island in the chain, Okinawa-Honto is home to the capital of the prefecture, Naha City, and the majority of Okinawa’s residents. And over 25,000 American  soldiers, which we’ll come back to later. Yes, over 25,000…

Naha is the main transport hub for the area and where most visitors arrive; whether by plane or ferry.

If you zoom out of the map a couple of clicks you’ll see just how far the islands stretch out to the south-west. Many of the outer islands are uninhabited; those that do have populations can be reached by ferry or plane.

Fossil records suggest that Okinawa was originally connected to the Asian continent. Somewhat more recently – albeit as much as 32,000 years ago – humans lived on the islands. It was the discovery of bone fossils belonging to a certain Yamashita Cave Man that provided evidence for this theory. Many other remains have been found and it is assumed that these early settlers came to Okinawa from mainland China.

Contact with the outside world appears to have begun in the 12th or 13th century according to artefacts and bones discovered in different areas of Okinawa.

The establishment of the Ryukyu Kingdom by Sho Hashi in 1429 ushered in a new era. The First Sho Dynasty began when Sho Hashi overpowered the three dominant kingdoms of the time; Chuza, Nanzan and Hokuzan. The Second Sho Dynasty followed seven generations later with Sho En taking power.

This period of Okinawan history is known as the “golden age of trade.” The Ryukyu Kingdom carried out business with China, Japan and other Asian countries and was even recognized by European nations. 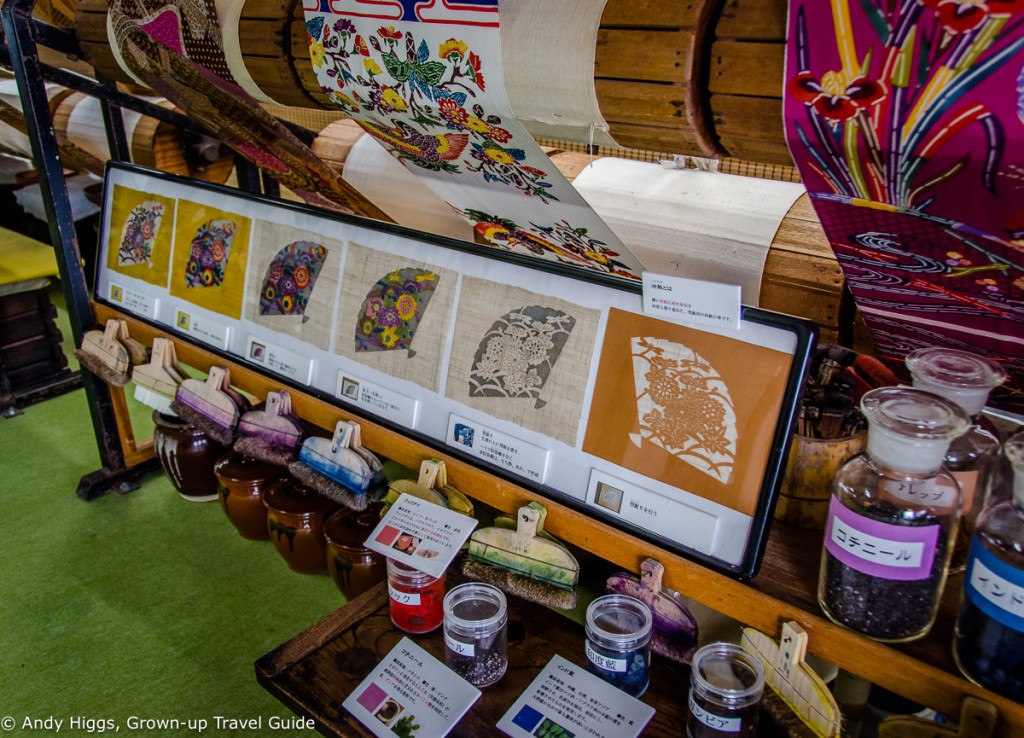 The unique culture of the Ryukyus was significantly shaped by exposure to foreign goods and culture during the Second Sho Dynasty.

Unfortunately it wasn’t to last – in the early 17th century the Ryukyu Kingdom was incorporated into the Japanese feudal system under the shogunate. Later it was annexed by Japan with the birth of the Meiji government, marking the end of 500 years of history as the Ryukyu Kingdom. Okinawa Prefecture was founded in its place.

A British Navy Captain, Basil Hall, wrote a bestselling account of his contact with the locals in the early 19th century. In his book, Captain Hall describes the Ryukyus as utopia, saying, “People in the Ryukyus are highly civilized. They are anything but greedy and look to be completely satisfied with their life.”

In the mid-19th century, four warships of America’s East India Squadron led by American Commodore Matthew C. Perry arrived at a port in Naha, which marked the start of his expedition to Japan.

The 20th century marked the low point for the islands. With the outbreak of World War II in the Pacific in 1941 Japan entered its darkest period of history and Okinawa was the scene of the only major ground battle in Japan, resulting in the deaths of a quarter of the island’s population and over 14,000 Allied troops. 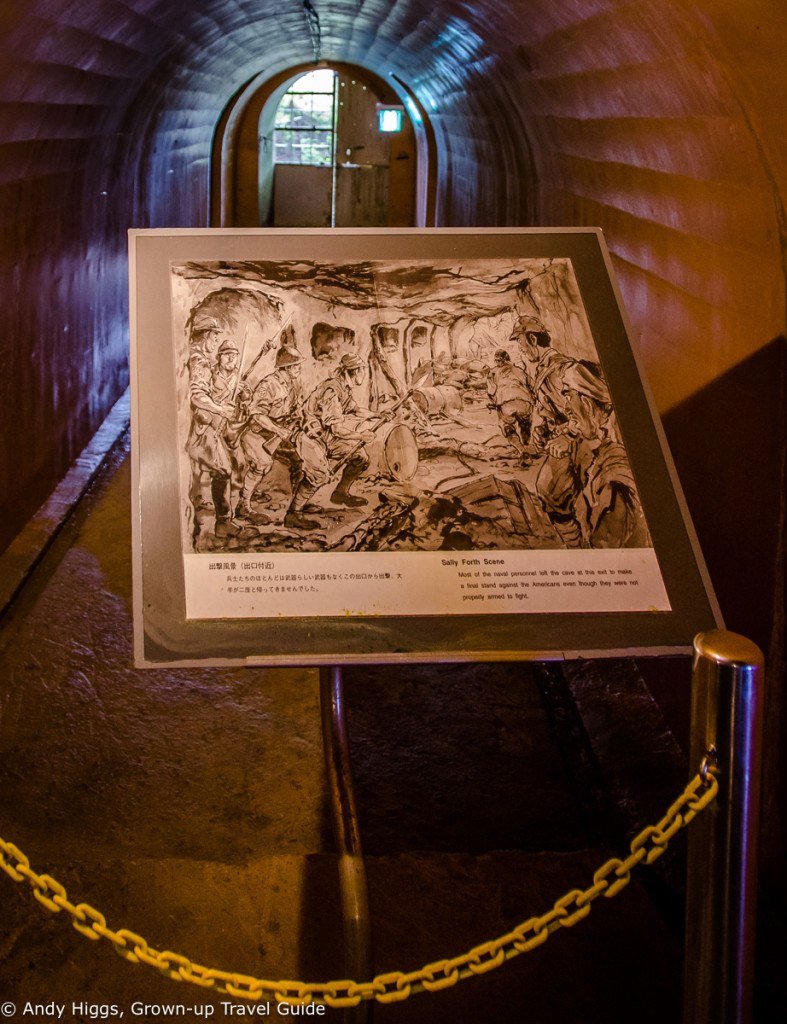 Okinawans felt that their homeland was sacrificed by the central military leadership – there is no doubt that civilians were treated terribly by their own armed forces and it is perhaps understandable that many still treat Tokyo with deep suspicion today. Mass suicides were commonplace as the army convinced the people that it was better to take their own lives than to be captured by the invading troops. Okinawa is dotted with shrines and monuments to commemorate these tragic events.

In the postwar period, Okinawa was placed under U.S. administration for 27 years, until its reversion to Japanese control on May 15, 1972. Although Okinawa regained its status as a Japanese prefecture, as previously mentioned there are still a large number of U.S. military bases and facilities all over the main island.

This has caused a lot of tension, especially following the horrific gang rape of a 13 year old local girl by US soldiers in 1995. Plans to reduce the US military presence seem to have been scrapped due to China’s perceived aggression in the South China Sea and protests against the relocation of one of the largest bases, Futenma, to the town of Henoko have been a regular feature in the news in recent months.

The bases provide both protection and some economic benefit to the islands; most Okinawans understand the need for the US presence but believe it could be reduced or relocated to other parts of the region. A compromise will surely be found but it seems likely that a large number of soldiers will remain for the foreseeable future.

These days tourism accounts for over twice as much earnings as that attributable to the US bases – more than 6,000,000 visitors arrive each year from mainland Japan and abroad. 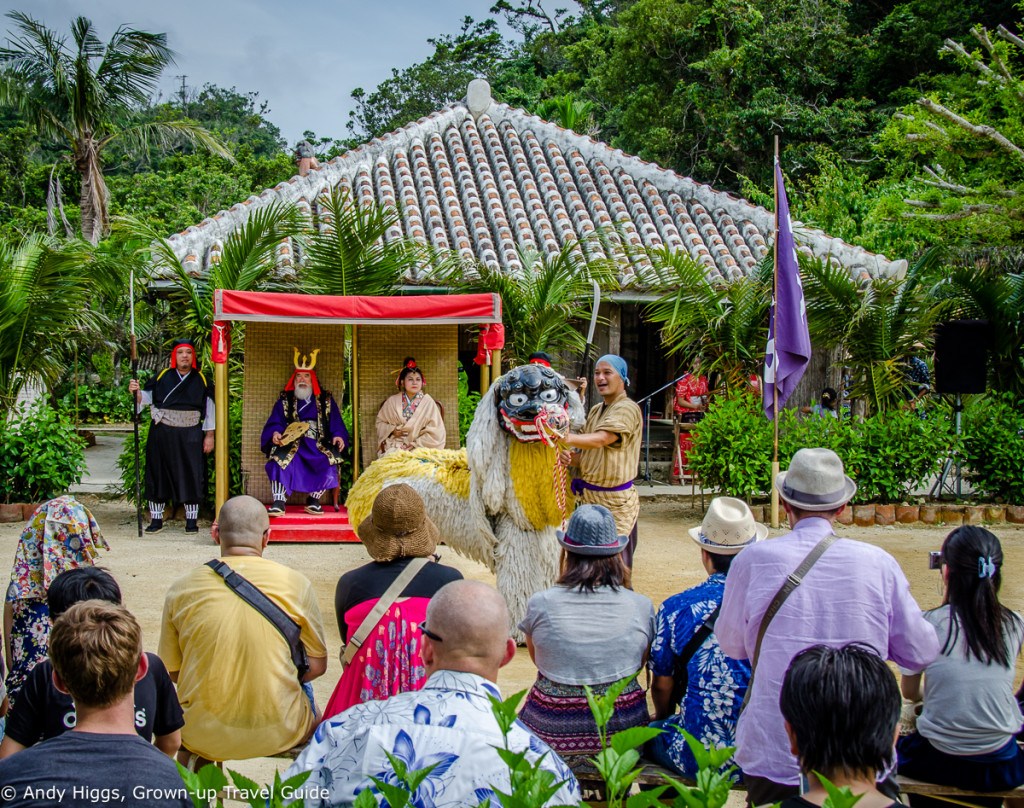 During the era of the Ryukyu Kingdom, Okinawa established a rich and distinctive culture which is very different from that of mainland Japan.

Visitors to the islands can experience Ryukyuan palace cuisine, awamori (a spirit made from rice) as well as arts and crafts such as bingata and lacquerware. 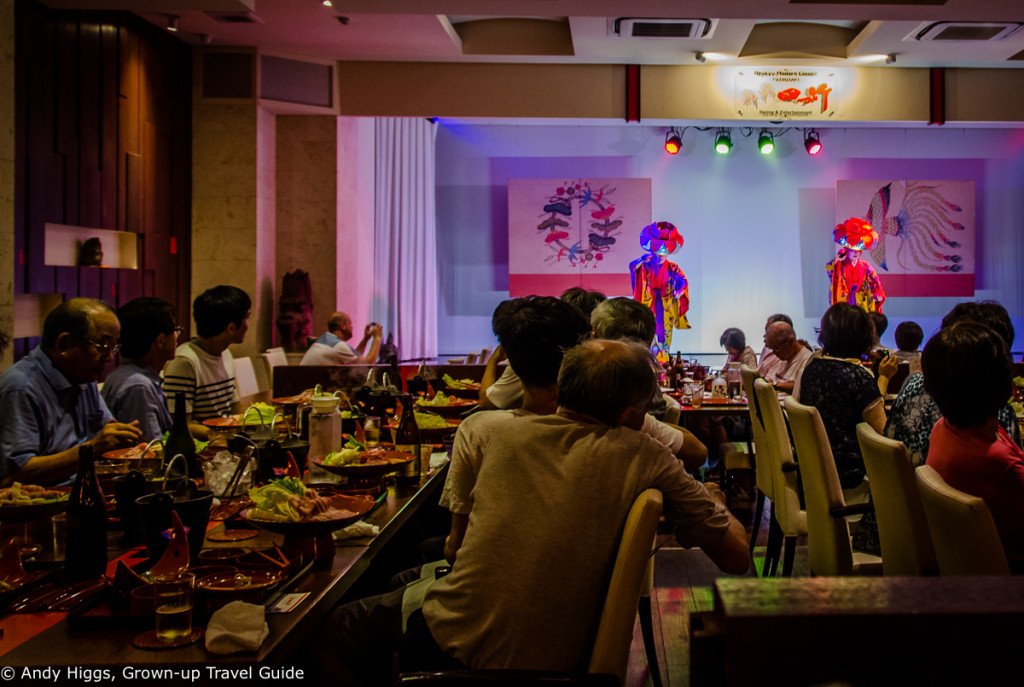 Classical dances such as kumi-odori were developed to entertain Chinese envoys and can be enjoyed today, often as an accompaniment to dinner at a restaurant. Dressed in beautiful costumes, dancers perform to music from the sanshin, flute, Chinese fiddle and Japanese zither.

In the next article in this series you can read about my experiences in Naha City, the capital of Okinawa where we stayed for the first two nights of our trip. I’ll also elaborate on many of the points touched on here – so watch this space for more!

Follow my adventures using the #gutgokinawa2015 hashtag on social media and read the next article on the series right here: Experiencing the exotic in Okinawa, Japan – Naha City, Day One