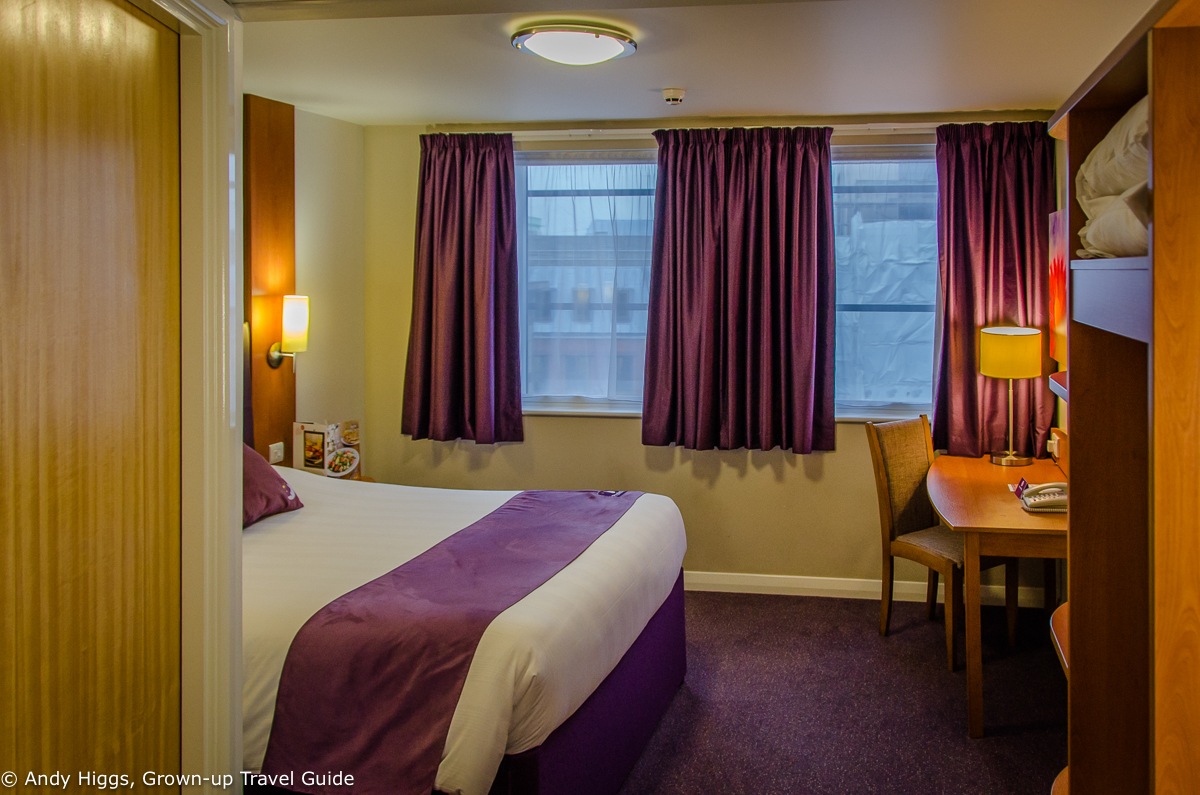 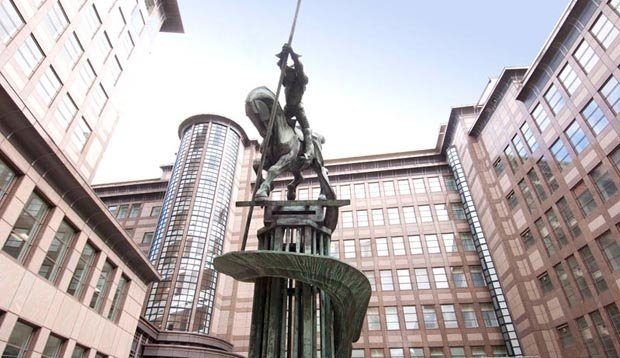 How times have changed. When I was living in London the only reason you’d choose a hotel in the City for a weekend stay was if you wanted to be undisturbed. As soon as the suits left on a Friday night the financial area of the capital was more like a ghost town until Monday morning. Rather like Wall Street in New York still remains, in fact.

In 2015, things are different. The pubs, cafes and restaurants are open almost as long in the rest of London (with a few notable exceptions) and I would now go as far as to say that Blackfriars is an ideal base for visitors.

So what was behind my decision to stay here? I was in London for WTM and as usual stayed right near the ExCel site for the duration of the trade fair. As soon as it was over, I high-tailed it for the city to make the most of my last few days in the capital. I can say from experience that you don’t want to commute from the other side of London to Docklands every day of WTM but equally you don’t want to spend forever on public transport when you want to meet friends for a beer in Soho.

My solution is simple – stay a couple of hundred yards outside the ExCel entrance doors during the fair itself and drop the socializing, then move closer to the action when work is over. My hotel of choice at WTM this year was the Premier Inn (review coming soon) and because I got a good deal there I checked the rest of their London portfolio when I needed somewhere for my last three nights.

So it was that I settled on the Blackfriars hotel – central, good value and with everything I needed – but how would Premier Inn measure up against the other chain budget brands? Would it be as bad as a Travelodge or up to Holiday Inn Express standards?

As its name suggests, the Premier Inn is located in Blackfriars; to be precise it’s about 300 metres from the Tube and overground station and a couple of blocks from Fleet Street. As well as the obvious benefits of the Underground system, this means there is a lot of good stuff within walking distance – St. Paul’s Cathedral is less than ten minutes’ walk away; you can reach the Tate Modern in a few minutes more and I walked to Covent Garden in less than twenty. There are also a number of noteworthy historical pubs in staggering distance and plenty of decent restaurants.

A tip – have a wander through Temple; it’s a unique part of London.

The hotel does not offer car parking facilities but if you are unfortunate enough to be driving in London you can leave your wheels at Baynard House Car Park for the not insignificant sum of GBP 2.50 per hour (although after 7 p.m. and before 6 a.m. is a far more reasonable flat rate of GBP 2.50.

The combination of location and price. I think you’ll find definitely struggle to find better value in such a good area.

If you’ve stayed at a Premier Inn before you’ll suffer from deja-vu – these hotels are basically identical. It’s actually quite uncanny; I woke the first morning after having spent four nights at a sister property on the other side of town and initially wondered if I had dreamt about changing hotels.

But let’s face it, you’re not staying here for its unique character – but here Premier Inn delivers a very high standard for a great price.

And did I mention the location? 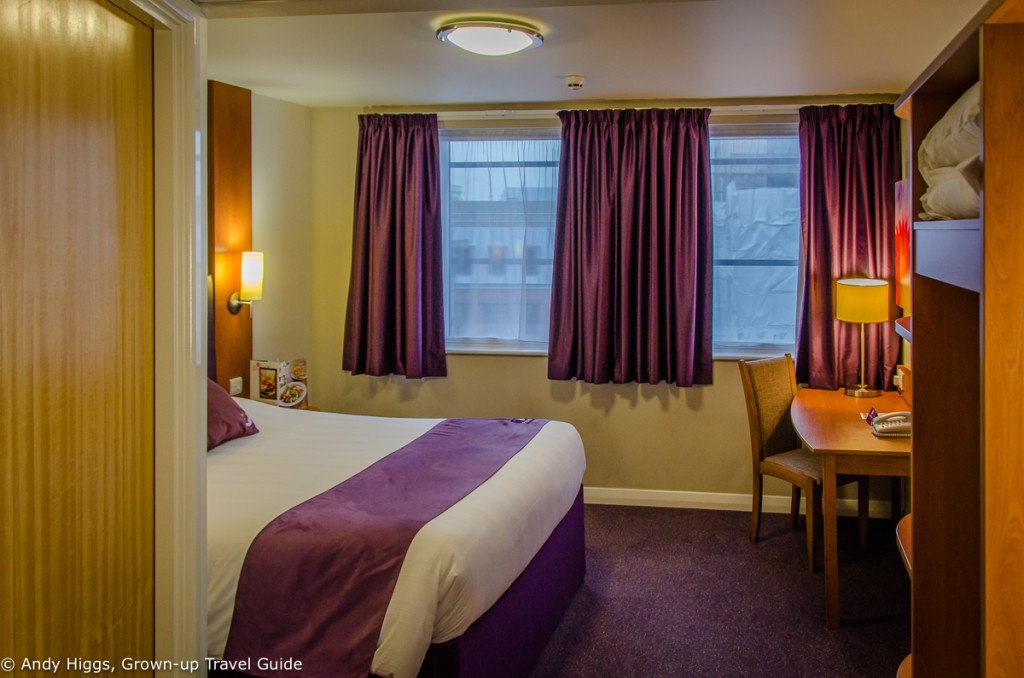 There are three categories of room: double, triple and quadruple. I stayed in a double room on this occasion, which I found to be a reasonable size – it would have been fine for a couple too.

I was immediately struck by the modernity and cleanliness of the room. The purple colour scheme inevitably divides opinion but I can live with it; it’s clear that the property has been well cared for in the three years since it opened its doors. 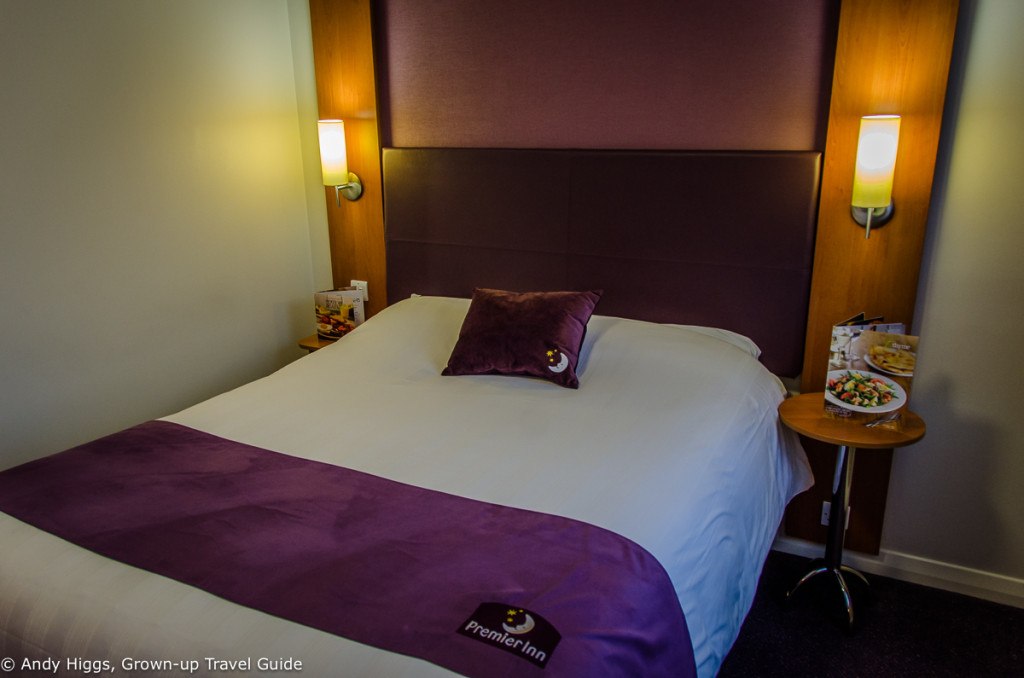 The bed was large and very comfortable – Premier Inn touts its ‘Hypnos’ bed as the key to a good night’s sleep and they even go as far as to guarantee it – you’ll get your money back if you don’t sleep well. 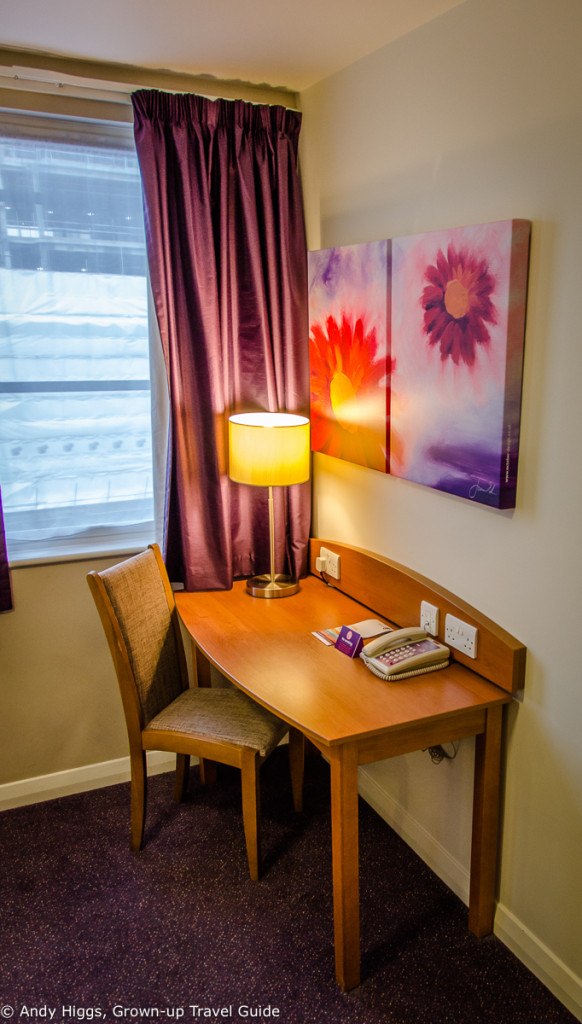 I doubt they have to pay out very often as I slept fantastically well. The desk was big enough to work at with power points conveniently located in the wall.

I always like being able to open the windows and you can here – to a degree – but you can just rely on the air conditioning which was quiet and effective.

There were a good number of power points in the room and Premier Inn get extra points for the bottle opener (although I always carry one when travelling). 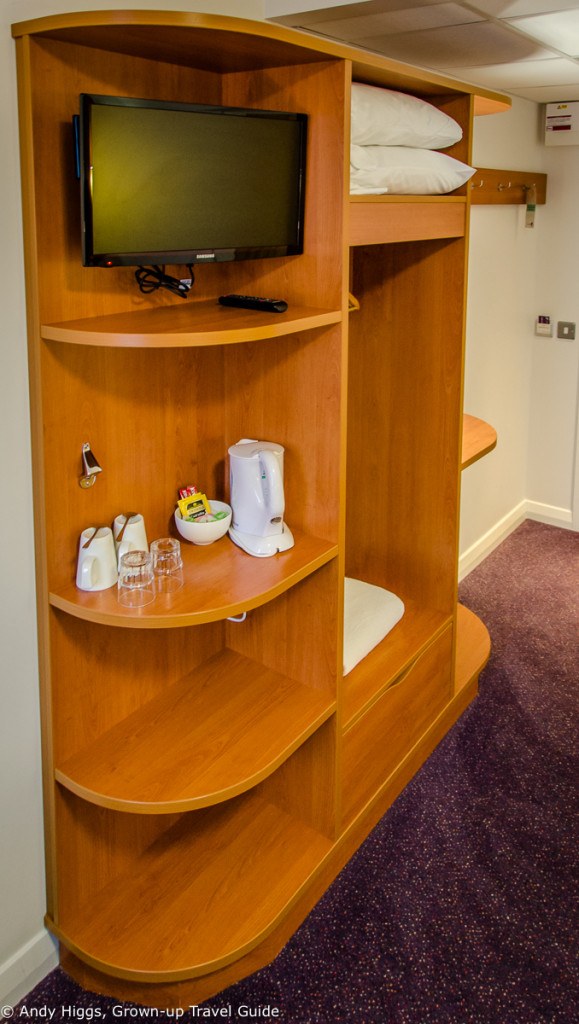 It would have been good to have a fridge, but I can live without such extras in order to keep the price down. Tea and coffee making facilities are a bonus, however.

Yes – this is England, after all. However the (purple) carpet was in excellent condition so I have no complaints. 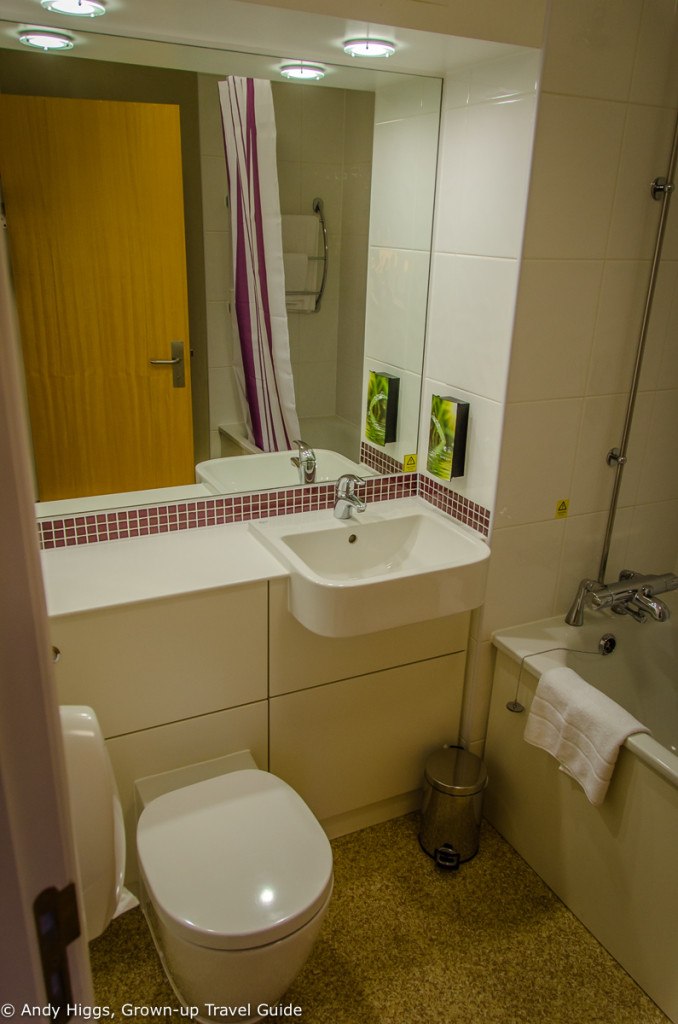 The bathroom was compact but they managed to fit everything in without it feeling cramped. 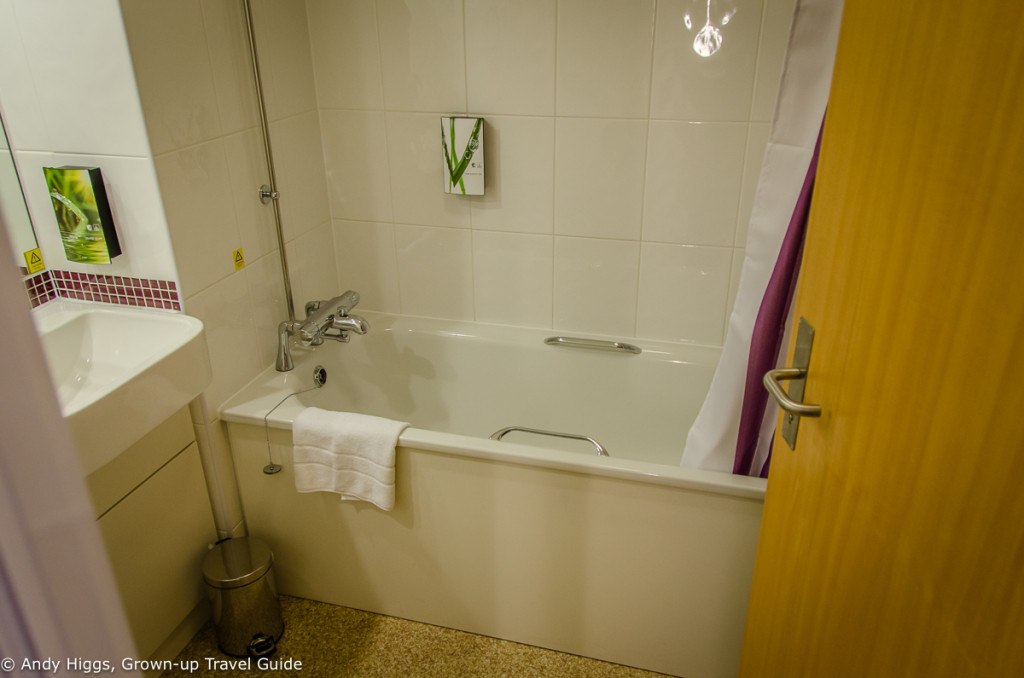 A full-size bath is always welcome, and the water pressure from the shower was excellent too.

The shower curtain worked, for a change and toiletries are provided in case you don’t have your own.

Yes, free and and good quality wi-fi is available all over the hotel. You can also pay extra for faster access but I didn’t find this necessary.

The hotel has both; I tried the former but not the latter. The bar had a reasonable selection of beers and other drinks and was pleasant enough; the restaurant was identical to the one in Docklands so I will go out on a limb and say the food is the same too – in which case it’s functional rather than gourmet cuisine.

They have the same 2 for 1 offer on drinks in the bar, too – although instead of paying half for one you get both drinks at the same time so be sure you’re ready for two glasses of wine or bring a friend.

Prices were competitive for both food and drink,

No; these are sacrifices worth making to get the rate down though.

Breakfast is not included in the cheapest rates but can be bought for GBP 7.95 (continental) or GBP 10.50 (full hot breakfast). You can also buy a ‘meal deal’ which gives you the full breakfast plus a two-course dinner and a selected drink for GBP 24.99.

I paid for the full breakfast a couple of times and was very impressed – there was a big choice of high quality dishes so it’s definitely one to recommend. Breakfast is free for children under 16 years old, which is an excellent idea.

Service was excellent – friendly and efficient on all fronts including reception, cleaning, bar and breakfast staff.

Rates start at around GBP 63 per night for advance booking without breakfast. A quick price search suggested that an average nightly rate of GBP 89 was probably more usual, but still very good value.

Let me also point out that kids under 16 stay free and get free breakfast too, so this is a huge deal for families.

For my stay, it was WTM week which doesn’t help matters but I still got a room for three nights for an average of GBP 121 which I was happy with. And yes, I paid my own way…

I can’t think of anything here.

I was hugely surprised by this hotel and can recommend it wholeheartedly. Premier Inn sets a high standard for a budget hotel chain with this property and I will definitely be back.