by Andy Higgs in Features, We likey.

1. Taking our (then) eight-year old daughter to her first rock concert Catching a gig in a foreign country gives you two experiences for the price of one. If you live somewhere a little off the main tour circuit it may also be the only way to see your favourite band and in some cases to experience the full stage show of a group that is just too big for the venues of your home country. The best way to keep up with tour dates is to subscribe to your favorite band’s newsletter or fan site; we received an email from the Muse website as soon as the details were available. Rebecca – eight at the time – was already a fan of the band (admittedly there may possibly have been a slight ‘guiding hand’ involved initially but her love of their music was and remains genuine) so a plan began to form. A little research online showed Goffertpark to have a great reputation as a venue and even better that there was a great hotel right next to the park with a big swimming pool and spa area, the Scandic Sanadome. Nijmegen is an easy rail journey from Amsterdam which was the icing on the cake as it is a great place to take kids. Concert tickets were then duly purchased and printed out at home (no need to queue up to collect them in Holland), hotel and train reservations made and return flights to Amsterdam sorted. On the day of the concert we took the train south from the capital and with predictable Dutch efficiency arrived in Nijmegen without a hitch and right on time. The excitement was palpable as we checked in to the hotel, with Muse fans making up a sizable proportion of the clientele. After having dinner we walked the short distance to the Goffertpark entrance and entered the concert area, catching our first proper view of the enormous stage set. Duly renowned for being one of the best rock bands to see live, Muse didn’t disappoint with their (super) massive performance. Rebecca loved it, as did her parents. When it all was over and the fireworks ceased we made our way back to the hotel already planning our next concert experience.

2. Splurging on a five-star hotel in Warsaw This time it was just myself and my better half who were on the concert trail. We had tickets to see Roger Waters perform “The Wall” live in Lodz, Poland and had booked a room at the excellent Andels Hotel. However we had to stop over in Warsaw first and I had previously read about the low cost of luxury hotels in Poland. As we were able to book early enough I scored a great deal on a room at the Inter Continental (pictured above) which is right opposite the Gotham City style Culture centre and just around the corner from the railway station. I had also informed the hotel that we were travelling to Poland for the first time and on a romantic weekend (indeed I may have said it was our anniversary…) and also that I was a Priority Club member (the hotel loyalty program me) although I didn’t have many points. Anyway when we checked in I was informed that we had been upgraded to a deluxe room so clearly something worked. The Inter Continental is a fabulous skyscraper of a hotel and we were greeted by a big corner room with a superb view across Warsaw. 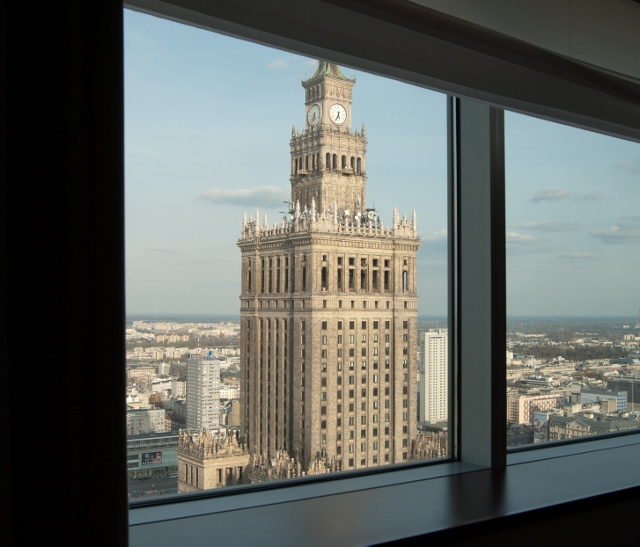 The bed was huge and comfortable, the bathroom luxurious and despite the initial disappointment that we were only going to be staying for one night we made the most of our time there. When looking online for dining suggestions it transpired that the restaurant in the hotel (Platter by Karol Okrasa) is considered one of the best in Warsaw and we had to agree. After a great night’s sleep and an excellent breakfast we made use of the swimming pool on the top floor which basically was the cherry on the top of a worthy splurge.

3. Copenhagen Tivoli in the rain

A family experience again. This time we were in the Danish capital and the major draw for our daughter was Tivoli – the grand old fairground which first opened in 1843 and is rather wonderfully located right in the centre of town next to the station. Unfortunately the weather had not been kind that day and the rain set in during the afternoon with no signs of slowing up as the evening came. We had semi-promised Rebecca that we would visit Tivoli that evening but personally I thought it might be worth trying to persuade her to give it a miss in favor of pizza and the hotel pool. Not a chance; so we got our wet weather gear on and took the bus into town in the pouring rain as darkness fell. If anything it began to rain even harder as we crossed the road and entered the fairground, but rather than spoil our enjoyment this actually added to it. The majority of sane people had stayed away so there were no queues to speak of and the slightly deserted – but fully manned – Tivoli has a special charm in the rain. The fair is beautifully lit by thousands of old fashioned bulbs which give it a magical appeal in the evenings. After countless rides and a fantastic time had by all we collapsed on the bus for the journey back with steam rising from our soaking clothes. Just think what we would have missed out on if I had listened to my ‘sensible voice’ instead of my daughter and called the whole thing off… Many occasions now but particularly winter 2010/2011. Various locations in and around Trondheim, Norway.

As I argued on this very website, cross country skiing is better than downhill skiing. Of course I did then go and argue the opposite but in fact I have become a cross-country convert in recent years. Living where I do (Trondheim, Norway) is of course the major reason for this change; I had never tried anything other than alpine skiing before moving here. It is also the reason I consider this to be a travel experience even though for me now it is a hobby I can pursue by putting on skis outside my front door. I had to learn by doing as there weren’t any lessons on offer and it is a big adjustment from downhill skiing, but it won’t take anyone that long to get competent. Once you are, you can look forward to heading out on trails through forests and over frozen lakes, maybe stopping at lodges serving steaming coffee and waffles with jam. It took me a few years before I realized that these trails are actually prepared by machines and not by the sheer number of pioneering skiers, but there you go. These days you can download an app (or go online) to see when the trails were last prepared; they are fitted with GPS so you can use the live data to seek out the freshest tracks. And this was how I spent many, many days last winter – checking the best routes, grabbing my skis and heading off for a couple of hours of fresh air, exercise and splendid isolation in the Norwegian forests. Exquisite.

5. Visiting the “Colossus of Rügen” Just 1.8 km up the pristine coastline from the resort of Binz lies a landmark of “dark tourism”. It is here in Prora that Adolf Hitler planned a seaside resort for some 20,000 guests – which had it been completed would still be the largest hotel complex in the world. Having heard about this place on the internet and seeing some pictures I was determined to get to see this “insanity in architecture” myself. We needed a stop on our summer holiday on the way from Berlin to Ystad in Sweden and Binz seemed to fit the bill – a nice beach resort for all of us and this monstrosity for my own peculiar interests. Full details, additional pictures and more thoughts on Prora can be found here, but suffice to say that it was well worth visiting. The main reason the “Colossus of Rugen” is so huge is that the Nazis wanted all rooms to have a sea view (nowadays nature has made a comeback and blocked the area between the buildings and the sandy beach with trees). The final design consisted of a 4.5 km long building strip and included 5 accommodation blocks, each of which was 500m long. Today the place is falling to pieces but part of it has just opened as a huge youth hostel; the future of the complex as a whole has hung in the balance for years and poses interesting questions about how best it can be utilized.

What are your best Grown-up Travel experiences? We’d love to hear your post-backpacking tales, so please submit your comments below…