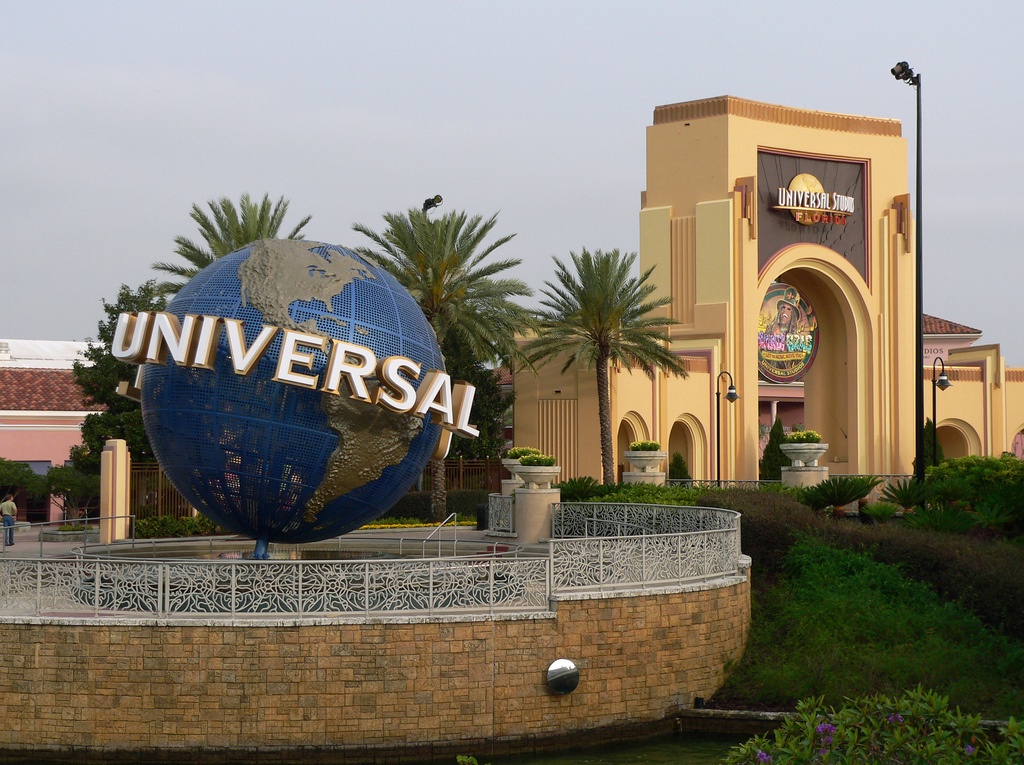 This article is part eleven of the series “Trip diary: Three weeks on the road in Florida”

Refreshed after our afternoon at Wet ‘n Wild the day before, we woke up ready to make the most of our last full day in Orlando. Anne decided to drop the roller-coasters in favour of the facilities at the Sheraton Vistana Resort and the rest of us went to reception to buy our tickets for Universal Orlando Resort.

Bearing in mind how we’d enjoyed the rides at the Magic Kingdom we were really excited to see what Universal’s two parks had to offer. We had high expectations as we piled into the car and made the fifteen minute journey across town. These expectations were raised yet higher by tantalizing glimpses of tracks hanging high in the air that we saw in the distance as we approached.

We found a slot for the Merc in the enormous Universal car park which is a multi-storey building offering protection from the rain, unlike the open car parks of Walt Disney World. It was then a short walk to the main entrance where we bought an express pass each as we would only have one day and such passes were not sold at our hotel.

You might want to sit down for this part. Okay, it’s not quite as complicated as Walt Disney World, but those folks at Universal are certainly trying to keep up with their arch-rivals…

Still with me? After all that, I have some good news. Provided you have a pulse and a reasonable sense of fun, the effort required to decide which tickets to buy and that uneasy feeling of parting with a huge chunk of cash will be but a distant memory shortly after you enter the park. You are going to enjoy yourself, and enjoy yourself a lot. Even 30 days later, when that credit card bill thumps onto your doormat and you are reminded just how expensive this day was, it’s unlikely you’ll regret it.

Just as Walt Disney World offers more than the Magic Kingdom, Universal Orlando Resort is actually two theme parks – Universal Studios and Universal’s Island of Adventure. There is also a dining and shopping area called CityWalk which you pass through first from the main entrance and forms a kind of hub between the two parks. Head over the bridge to the right for Universal Studios while the one on the left leads to Islands of Adventure. 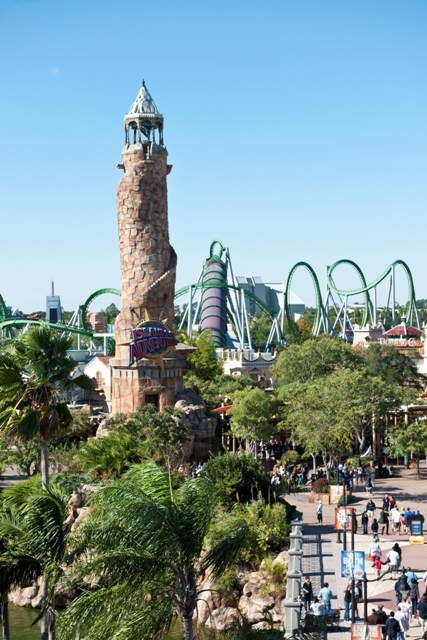 We went left, deciding to explore the newer part of the resort first. This park was added in 1997 (Universal Studios opened its doors in 1990) and in addition to Universal’s film properties includes a number of licensed attractions from other producers. Just in case you were wondering why Spider-Man is here. And Popeye. And the Cat in the Hat.

But more importantly, Harry Potter. Beating Disney for the rights to the bespectacled schoolboy propelled Universal Orlando Resort into the big league with almost eight million visitors a year doing what we did here. 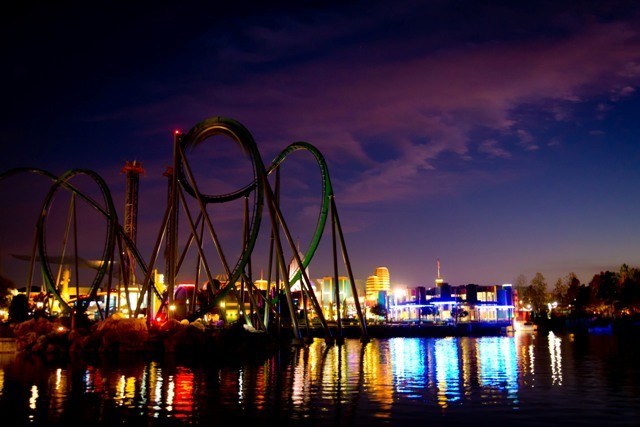 The first ride to catch our attention was the Incredible Hulk Coaster. This was where the Higgs family really became hooked on thrill rides and if there was any justice in this world there would be a plaque next to the entrance to commemorate this event.

Storm clouds were threatening as we left our bags in a locker and sped past the long queue using our Express Passes, but luck was with us and we managed to ride the Hulk (yes, that sounds weird) before the skies opened and the ride was temporarily closed. It was so good that we waited out the storm and went back again. Basically it starts fast (0-40 mph in 2 seconds), flips you into a zero-G roll then blasts you down towards the lake in the middle of the park before reaching top speed of 67 mph. Then you have the rest of the ride…

As an introduction to proper roller-coasters, this is the perfect ride. Mari Anne took a little convincing but the staff convinced her. “Oh I take this every day before work, after work and any time I can,” said the guy checking our tickets. “It’s over so fast, you don’t have time to get scared, either.”

So there’s a Grown-up Travel Guide tip right there: try the Incredible Hulk Coaster to discover where you stand on the whole roller-coaster thing – it’s the litmus test for thrill rides.

I won’t bore you with the details of everything we tried, as we did try practically everything. The other highlights at Islands of Adventure were as follows:

Dudley Do-Right’s Ripsaw Falls – I have absolutely no idea who Mr Do-Right is but this flume ride was fun despite the fact that it was raining at the time and we got utterly soaked, as you’d expect. Drying booths are available for a charge afterwards but consider waterproofs too 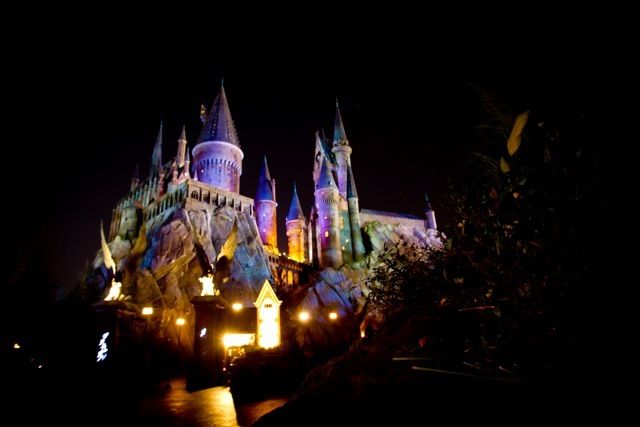 Harry Potter and the Forbidden Journey – your Express Pass is no good here so you will have to queue. But take solace from the fact that it won’t be as bad as the 8 hours the crazy first-day visitors waited. I think it took us just over an hour and a half to reach the ride, but the line is part of the experience once you enter the building, with video projections and neat tricks to keep your attention.And it’s worth it – the unique way the ride is constructed means that it feels like you’re flying; add the high definition visuals, robotics and actual effects like fire and you’re in for a real treat. 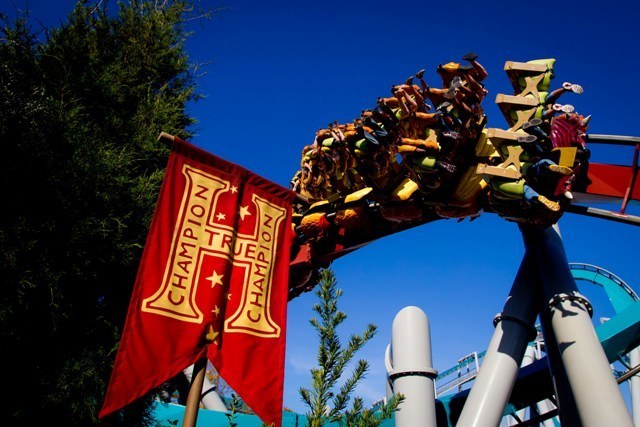 The Cat in the Hat – I know, but I love those books so we just had to.

The big news for 2014 is the opening of a major new Harry Potter attraction, Diagon Alley. This will connect the two parks with a train ride – the Hogwarts Express – and will also change the dynamics of park visits. A two-park ticket will be essential if you want to take the Express. We’ll let you know all about this after our visit in July.

After lunch it was time to see what Universal Studios had to offer. It’s easy to forget that this is a real, working film studio but on entering the park you certainly feel like you are on a film set. Personally I found this preferable to Disney’s efforts to immerse you in a fairytale world, but both work.

Again, we loved it all here but these were our favourites: 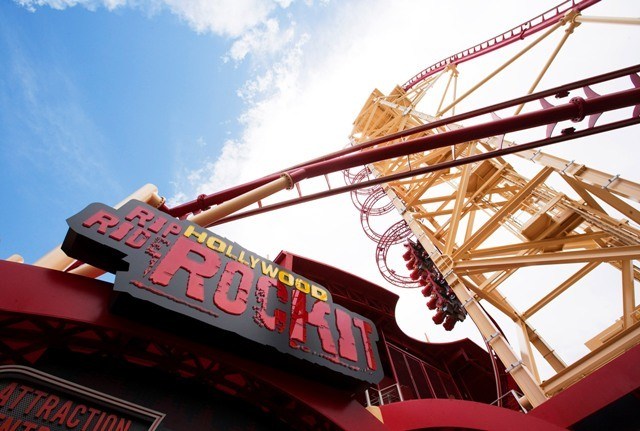 Hollywood Rip Ride Rockit – the gimmick here is that you can choose your own song as the soundtrack to this fast and slightly brutal ride. I recommend ‘Paranoid’ by Black Sabbath.

Transformers: The Ride 3D – you couldn’t pay me to see the Michael Bay films but the ride is a good one. Loads of good effects, both physical and virtual and as over-the-top as you’d expect

Twister – Ride It Out – more of a tornado simulator than a ride, with a very cheesy narration that happily fails to spoil the experience

Men In Black Alien Attack – this adds a competitive element to the ride as each of the six people in the car is responsible for zapping as many aliens as possible. 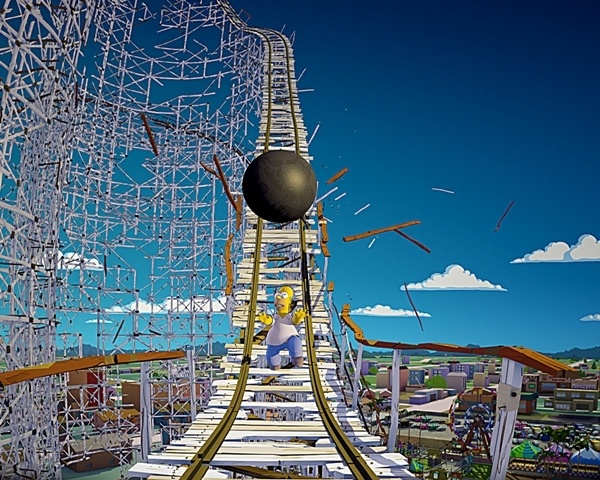 The Simpsons Ride – The combination of moving seats and massive IMAX screens works very well, especially in the Simpsons universe with the actual cast members doing the voice work. The area around the ride is now Springfield USA too so you can buy a Krusty Burger and have a Duff beer at Moe’s.

In terms of theme parks, this is the place you should spend most of your time and money in Orlando. As there are so many great rides you should aim for two days if possible, but as you can see we did a lot in just one. Universal Orlando Resort is the cooler, more edgy big brother to the Magic Kingdom and appeals to a slightly older crowd, and does what it does well.

With the new attractions coming this year as well as the ones we didn’t have time for in 2013, we cannot wait to go back. We’ll let you know what we think after the summer!

Hiring a lawyer to deal with a legal issue abroad

Fly with Saudi Airlines Booking to Abu Dhabi for a Never-before Known Exploration!