Continuing our mission to inspire and inform Grown-up Travellers we present the latest in our series of articles containing ideas for alternative things to do and see in well-known destinations. We started our epic journey around the world in good old London, then covered Stockholm, Copenhagen, Berlin, Oslo, Paris, Amsterdam, Chicago and Istanbul. We then hopped over to Australia with guides to Perth, Melbourne and Sydney – before returning to Europe for Belfast and Levi in Finland. After a brief stay in the Middle East for Dubai we ended up in Rome for our most recent article. Italy was so nice we decided to stay – and here take a look at one of the world’s major tourist destinations…

For once you’re right – it’s Venice.

And you found something off the beaten track in Venice?

We did. A bit like Rome there is so much to see that something has to be left out when most people visit. But we’re not most people, and have gathered some lesser-known sights for you…

* at least it’s definitely unlikely. If you have heard of all these, you should be writing for us… 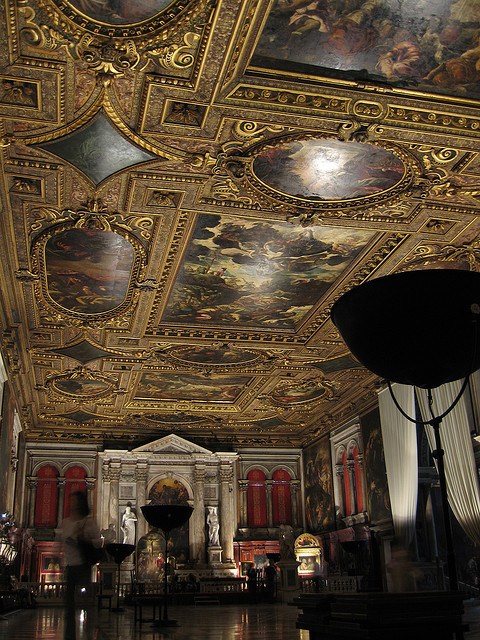 Venice’s answer to the Sistine Chapel in Rome is San Rocco, a guildhall which kept Tintoretto occupied for some 23 years. As you enter you are treated to scenes from the life of Mary, including a somewhat horrific ‘Slaughter of the Innocents’. But make sure you get your breath back before climbing the impressive staircase and taking in the Great Hall as you will likely have it knocked out of you by the stunning decor. As if that wasn’t enough, in the side room is a Crucifixion considered by many as Tintoretto’s greatest achievement. Ignored by almost every visitor, Lazzaretto Nuovo is in fact one of the great historic sites of Venice and you really should make the effort to check it out. In the past Lazzaretto Nuovo was the Venetian Republic’s quarantine island – the city was vulnerable to outbreaks of plague due to its extensive maritime trade and developed clever ways to prevent the spread of the disease. After filling up the original island, in 1468 the senate designated Lazzaretto Nuovo as a quarantine station, where ships arriving from the Mediterranean were required to rest up for 40 days (the term ‘quarantine’ comes from ‘quaranta giorni’). If they were still healthy after this period they were free to go.

These days the island has one inhabitant (and a lot of cats) – Gerolamo Fazzini, a former history teacher who works as island guardian and official guide – a position for which nobody else applied. Fazzini emphasizes that the  island is ‘an important document in the history of medicine’ and that ‘guests’ were treated surprisingly well. You can view the small houses, each with its own fireplace, kitchen and even a toilet with running water. It’s definitely worth seeking out this old piece of Venetian graffiti carved on a column of the Palazzo Loredan, especially when you are familiar with the story behind it. It depicts a man with a long pipe and refers to a local legend about Biagio, a fisherman. 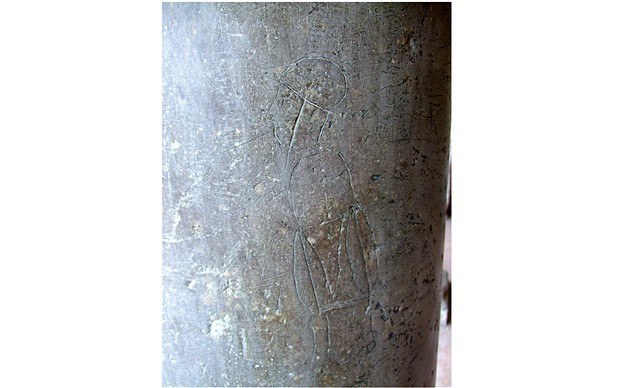 Allegedly Biagio was standing outside the palace one day when Satan – in the form of a monster – reared his ugly head out of the canal and grabbed two young girls from a gondola. Biagio begged him to let the girls go free; but cheeky old Satan said he would on one condition – if Biagio were able to put his arms around the entire world. Rather surprisingly Biagio’s arms duly extended from his body and embraced the globe, ably assisted by cherubim. Satan, understandably shocked, disappeared and left the girls and Biagio unharmed. There may no longer be as many of them (there were 10,000 two centuries ago) but gondolas remain the symbol of Venice. The boats became the preferred way to navigate the islands of the lagoons when horses were outlawed from the streets in the 14th century. There are just 500 gondolas today – all of which are only used by tourists. A typical gondola is around 11 metres long, weighs about 500 kg, travels about walking pace and is always painted black – the result of a 17th century law to stop owners competing to have the most attractive vessel. Building a gondola takes about two months and when finished it will cost you between €35,000–50,000, depending on whether it’s fully-loaded with air con and all the trimmings. It will last you about 15 years, although you’ll have to factor in a new coat of varnish every 40 days. If you walk down the Accademia side of the Rio San Trovaso canal you’ll find your way to a fabulous gondola workshop. The workmen traditionally hail from Italy’s Dolomite region, renowned for producing excellent carpenters. Currently Venice has some 400 licensed gondoliers, and when one passes away the license is transferred to his widow. How about something a touch macabre to finish? Yes we thought you’d like that. You’ll need to find the San Simeone Piccolo church because there’s something spooky hidden underneath it. In fact it houses a cemetery – with walls covered in 18th century frescoes inspired by the themes of death, Christ’s Passion and the Last Judgement. Oh and did I forget to mention? It’s also filled with human bones. It’s not officially open to the public but if you get there at the end of Sunday mass, ask one of the members of the Fraternity of St Peter who take care of the church and they’ll probably let you have a peek.

3 Responses to “Been there, haven’t done that – 5 things you shouldn’t miss in Venice”