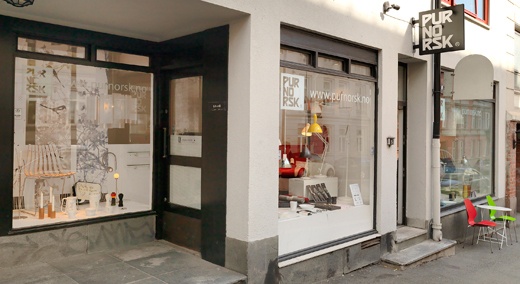 In our mission to inspire and inform Grown-up Travellers we continue our series of articles containing ideas for alternative things to do and see in well-known destinations. So far we’ve been shared tips on London, Stockholm, Copenhagen and Berlin and we have articles on Amsterdam, Chicago and New York in the pipeline.

Now we’re back on home turf, more or less. But I thought you didn’t like the Norwegian capital?

It’s true that I’m no fan of Oslo, and would never put the city in the same league as Stockholm or Copenhagen, but if you know where to look (or read this site) you can find enough interesting diversions for a fun weekend. So without further ado let’s give you some tips…

5 things in Oslo your friends won’t have heard about *

* well, it’s at least fairly unlikely that they have.

Cynics may wonder if there are enough products designed in Norway to fill a shop, but cynics would be wrong. As the only store in the country to exclusively focus on Norwegian design (hence the name, which translates as ‘Pure Norwegian’) Pur Norsk is packed with everything from kitchen utensils to furniture. The perfect place for a Norwegian souvenir with a difference and to suit any budget; the most popular items for visitors are Røros blankets, cutlery and other kitchen equipment. 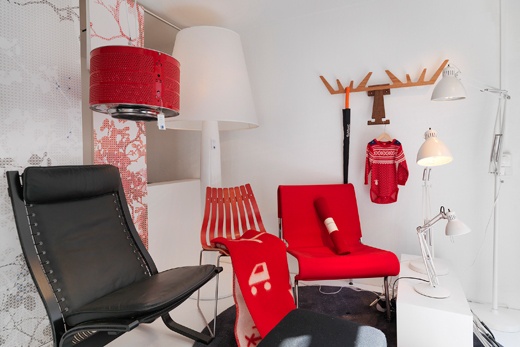 It’s almost like visiting a gallery or museum to learn more about the diversity of design, and is well worth a visit whether you plan to buy or just to browse. The shop’s owners, Marianne Lien and Lasse Altern Halvorsen can provide all the background information you need about any product they stock. Pur Norsk was voted one of the 5 best interior stores by the British magazine Monocle. 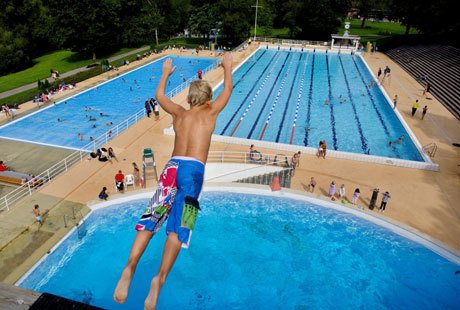 When the sun is shining and the air is warm, Oslo has a whole new appeal. In the height of summer it can get seriously hot in the city and your options for cooling off include heading to the waterfront or joining the locals at Frognerbadet outdoor pool. I’m not suggesting you have to attempt what that guy above is doing in the photo but you will doubtless enjoy the facilities. Or why not join the earlybirds who are to be found queueing up at quarter to six each morning for that perfect start to the day? A favourite for Oslo residents and visitors since it opened in 1956, Frognerbadet’s biggest draw is perhaps its location, surrounded by grass lawns and with a clear view of the Vigeland Sculpture Park. 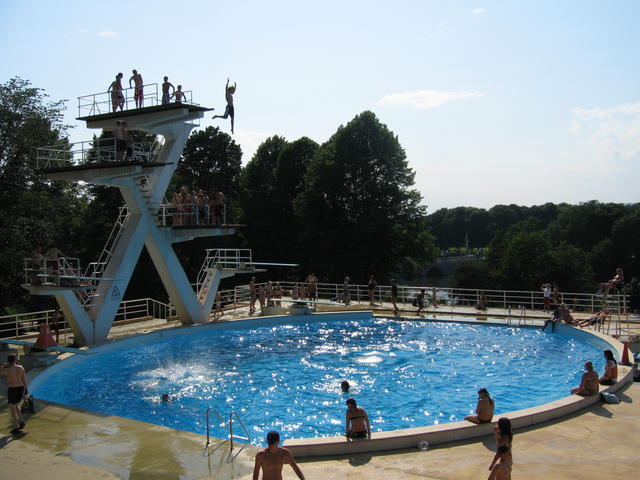 There’s something for everyone here, with water slides and a range of diving boards right up to 10 metres (see picture). Chill out with an ice cream and/or a hot dog afterwards and catch some rays, just don’t forget the suncream – you’ll burn fast if you’re not careful. You can buy swimming gear at the pool if you forgot to bring your own. 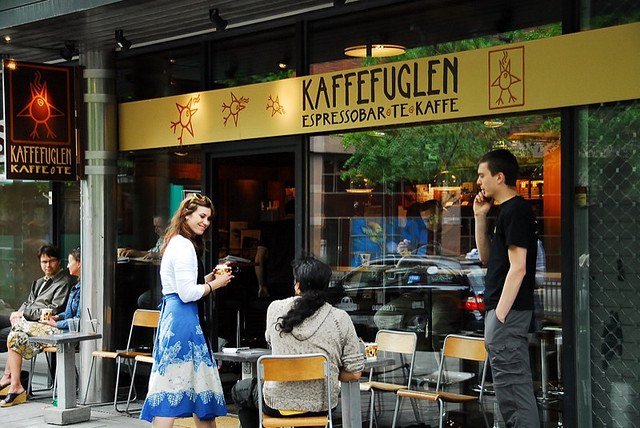 It’s an oft-repeated (but nevertheless true) fact that Norwegians drink more coffee than anyone else on the planet – some ten billion cups a year or a staggering 10 a day. There is no shortage of places to buy a dose of caffeine in the Norwegian capital but Kaffefuglen is arguably the most stylish – the style in question being that of the 1960s. As with the Stockholm cafe String, you can also buy anything you see inside from the cups to the furniture, should you so desire. 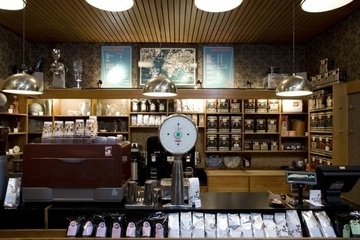 In the evenings from Thursday to Saturday you can also get something stronger than coffee when ‘Fuglen’ serves up cocktails. And they’re not just playing at being a bar either – their own creation won a Norwegian cocktail competition last year. The success of the establishment has led to the opening of another branch, but in Tokyo rather than Trondheim. A bold move, but not half as bold as the fact that Fuglen will be selling Norwegian sake from the Nøgne Ø craft brewery. Yes, in Japan. Oh and in case you were wondering the name means ‘coffee bird’. 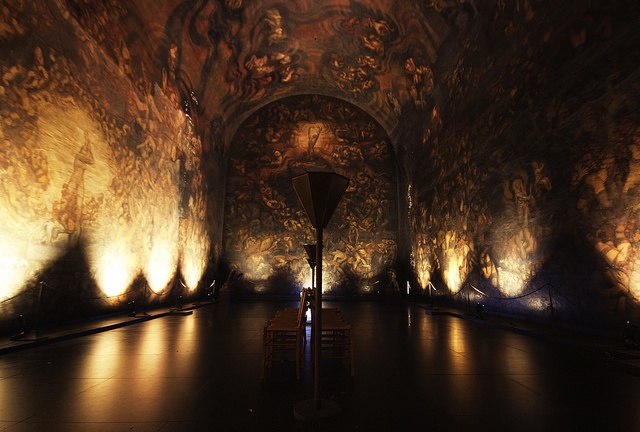 On the few occasions that anything is actually written about this place, it almost always includes the words, ‘Oslo’s best-kept secret’. There is still a great deal of truth in this and when people talk of Vigeland it is usually about Emanuel’s older brother Gustav (he of the statues in Vigeland Park). Even those living in the neighbourhood seem unaware of the museum, but you should make the effort to take a look. It is actually a mausoleum and intentionally offers a different kind of experience. 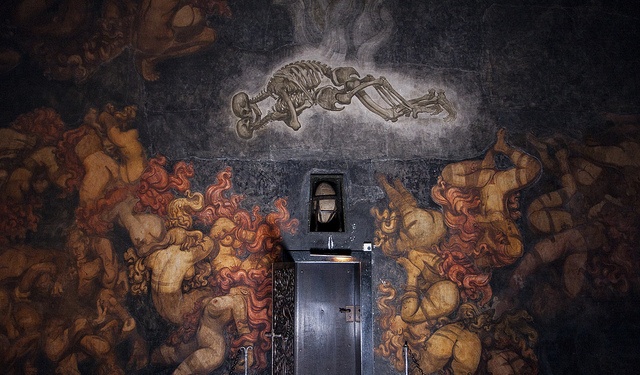 It’s dark and foreboding and your footsteps echo for 20 seconds due to the amazing resonance inside – a fact which has not gone unnoticed by musicians. Several artists have both played gigs and recorded tracks in the burial chamber. The frescoes adorning the walls are atmospherically lit and a visit here is not like standing in line at the Louvre. You’ll have to get here on a Sunday as it’s closed the rest of the week which in fact makes it a perfect addition to your weekend itinerary – Sunday is a quiet day in Oslo. 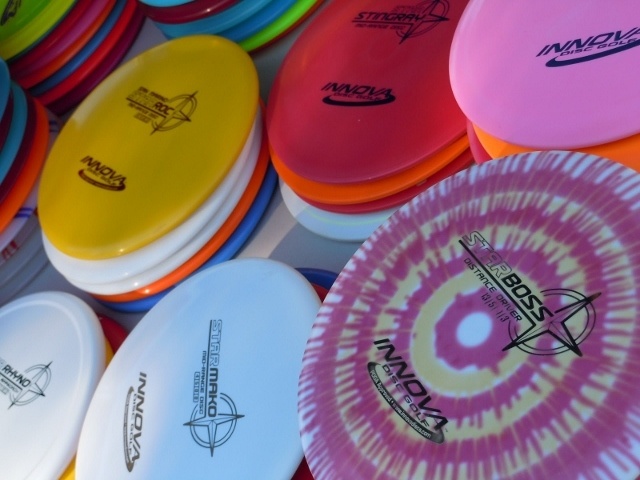 Well, I promised you something unusual, and this place definitely ticks the boxes. It’s a shop open two hours a week (on Tuesday afternoons) run by former frisbee world champion Sune Wentzel, and it’s devoted to the sport of frisbee golf. By ‘devoted to’ think over 1000 different types of frisbee. You may not be familiar with the game but there are in fact more than 40 places to play in Norway alone and the man himself reckons frisbee is the fifth largest competitive sport on earth. That includes all the different types of frsibee game including (ahem) playing with yourself. Which is known as Self-Caught Flight, by the way.

Instead of whacking a ball into a hole the aim is to float your frisbee into a metal net – and there’s way less snobbery than for regular golf. Having said that, you can clearly get involved in equipment envy if the sheer variety of products on sale in his store on the outskirts of Oslo is any guide. If you can’t make it during the brief window of opening Sune has an extensive online store where you can find anything you could possibly need (and plenty you didn’t know you needed) for ‘park and recreational activities’. Sounds great for larking around on the lawns of Vigeland Park after your early morning swim at Frognerbadet.

Do you have anything you’d like to add to this list – something out of the ordinary in Oslo? Please add your tips in the comments below, we’d love to hear from you!